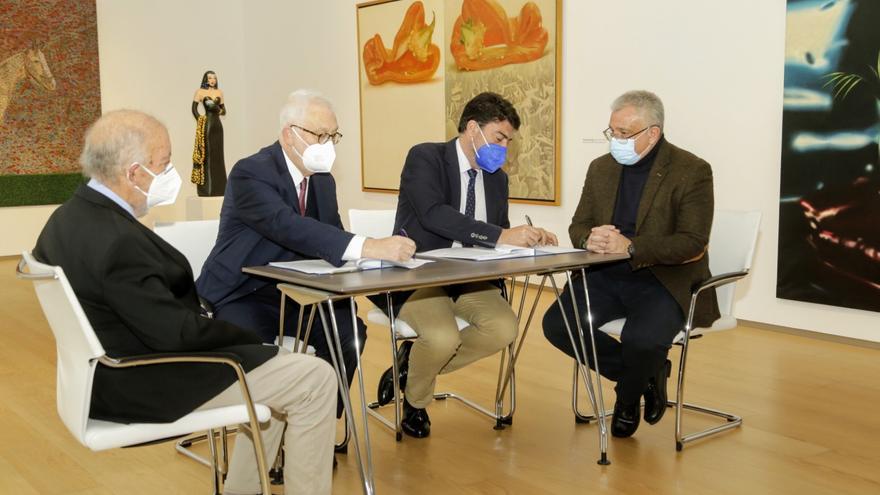 The president of Mediterranean Foundation, Luis Boyer, and the mayor of Alicante, Luis Barcala, have signed in MACA the renewal of the agreement signed since 2012, by which the Foundation’s Contemporary Art Collection is deposited and guarded by the Alicante museum.

After signing the agreement, both have visited “With time 3”, a renewed permanent exhibition curated by Rosa Castells, curator of the museums, with works from the Fundación Mediterráneo Collection. The Councilor for Culture was present at the event, Antonio Manresa, and the vice president of Fundación Mediterráneo, Miguel Valor.

Since December 2012, MACA has deposited 212 pieces from this collection. In them, the work of 125 artists, the most essential names on the contemporary Spanish art scene. It covers a chronological arc that runs from the democratic transition to the present day: an artistic period in Spain that corresponds to the last 40 years, so generous, full of illusion, energy, disenchantment, waste and naivety; but also of reflection, of denunciation, of commitment, of adventure … A period in which several generations of artists coexist in a normalized way as never before, enriching each other, the youngest learning from the undisputed masters, and rediscovering themselves in the most young people the persistence of the essential.

Boyer pointed out that “Fundación Mediterráneo is proud that citizens of Alicante and tourists can continue to enjoy our Contemporary Art Collection at MACA, a magnificent museum that allows us to continue to value these works of art, both through permanent exhibition Eventually 3 as through the temporary exhibitions that periodically bring together pieces from our collection ”. Finally, Boyer thanked “the mayor of Alicante and the Councilor for Culture, as well as the entire technical team of Fundación Mediterráneo, for the rigorous work that today allows us to sign this new agreement between the City Council and the Foundation.”

Barcala has been “very satisfied to be able to continue with this excellent collection deposited at MACA, to the delight of Alicante residents and visitors, since it brilliantly shows an important sample of art from the last decades so decisive in our country.” The mayor also wanted to highlight the “magnificent work carried out by the MACA team, led by Rosa Castells, who has once again achieved the perfect balance in an exhibition”.

Eventually 3 brings together a series of works that have in common reflecting on contemporaneity from the key artists, those who allow us to reconstruct part of the artistic framework of the 20th century.

This permanent exhibition has been designed almost like the sum of three temporary exhibitions since the architecture of the room makes it possible to single out the gaze around a series of concrete works that make up their own exhibition script.

Eventually 3 proposes to exhibit some unpublished works at MACA so far. Paintings, sculptures, drawings, photography, make up this permanent exhibition of the Fundación Mediterráneo Collection at the Alicante Museum of Contemporary Art: detained spaces between collections, from the first floor to the second floor, repeating artists and superimposing works. Crossed glances diagonally while looking out of the corner of the eye at the cracks through which time slips away.

The Collection has a discourse that allows anchoring the first works in the times of the democratic transition, not as a period closed in itself but as a sample of a convulsed historical time in which the artist and the work of art are transformed at the service of a company under construction: Antoni Tàpies, Joan Brossa, Manuel H. Mompó, Hernández Pijoan, Equipo Crónica, Equipo Realidad, Eduardo Arroyo, Esther Ferrer… A new generation will arrive so closely related to the previous one: Jordi Teixidor, José Mª Yturralde, Soledad Sevilla , Carmen Calvo, Eva Lootz, Joan Cardells, Rafael Armengol … while the euphoria and enthusiasm of the 80s and 90s in a country that is internationalizing, builds an artistic market and creates museums and art centers.

It is the time of a new generation of artists no less extraordinary than their predecessors who are looked at over and over again. It is the turn of Juan Muñoz, Rogelio López Cuenca, José Manuel Broto, José Mª Sicilia, Miguel Angel Campano, Miquel Barceló, Victoria Civera, Ángeles Marco, Pamen Pereira … A period in which several generations of artists coexist in a normalized way, enriching themselves mutually, the youngest learning from the undisputed masters, and rediscovering in the youngest the persistence of the essential.