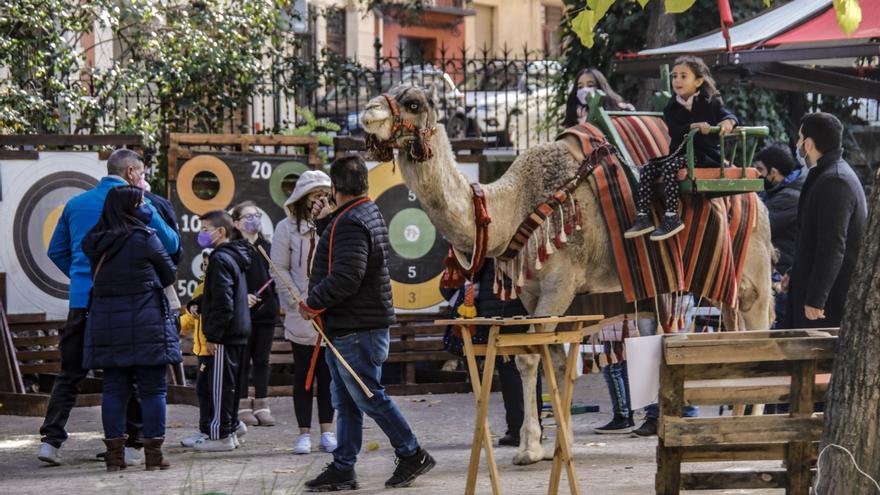 This Christmas event took place from December 4 to 8 at La Glorieta from 10:30 a.m. to 2:00 p.m. and from 5:00 p.m. to 8:30 p.m., following with all the health protection measures against covid-19, maximum capacity and one-way traffic within of the enclosure, always with the mandatory use of a mask, and hydroalcoholic gel both at the places of sale and at the entrances to guarantee safety at all times. The consumption of food and drink was also prohibited in the entire Glorieta, except in the restaurant area.

This market counted like every year with stalls that offered their products both local and proximity, as well as Christmas. A total of 32 local businesses and three entities participated in this Mercat de Nadal, which once again marks the time of “planting the nativity scene” and putting the Christmas decorations in the houses of Alcoy. The merchants highlighted the results obtained and that there has been a lot of attendance not only from Alcoy and the region, but also from different places in the province and even foreign tourists. A good result for the businesses that, year after year, collaborate with the City Council and with those that “without them”, as explained by the Councilor for Commerce, Vanessa Moltó, “nothing would be possible”.

«We closed a new edition of Mercat de Nadal with success. Thanks to the commercial entities that participate, to the visitors and to all those who have worked to carry out this project, without a doubt, this Market is already an essential proposal of Alcoyana Christmas, one more attraction that shows that we have a living city, with the best Christmas in the world, which attracts more and more people throughout the month of December », Moltó highlighted.

Tickets for the Royal Camp

As is also usual, the Mercat de Nadal has had the solidarity part, with three entities, one with the Caritas campaign ‘That no one is cold this winter’ with the intention of continuing to try to help to get butane for the most vulnerable families. There was also the ‘Friends of Modernism Cultural Association’ with a stand for the benefit of the ‘Association of Relatives and Friends of Alzheimer’s Patients of Alcoy and Comarca (AFA ALCOY)’ and the ‘Samarita Cultural Association’ with tickets to the royal camp. Tickets by bus were sold out in about two hours, those to go up on foot were much longer available.

This year, in addition to the trade with local and Christmas products, as is tradition, there have been special shows and activities for children, always following the current health recommendations.