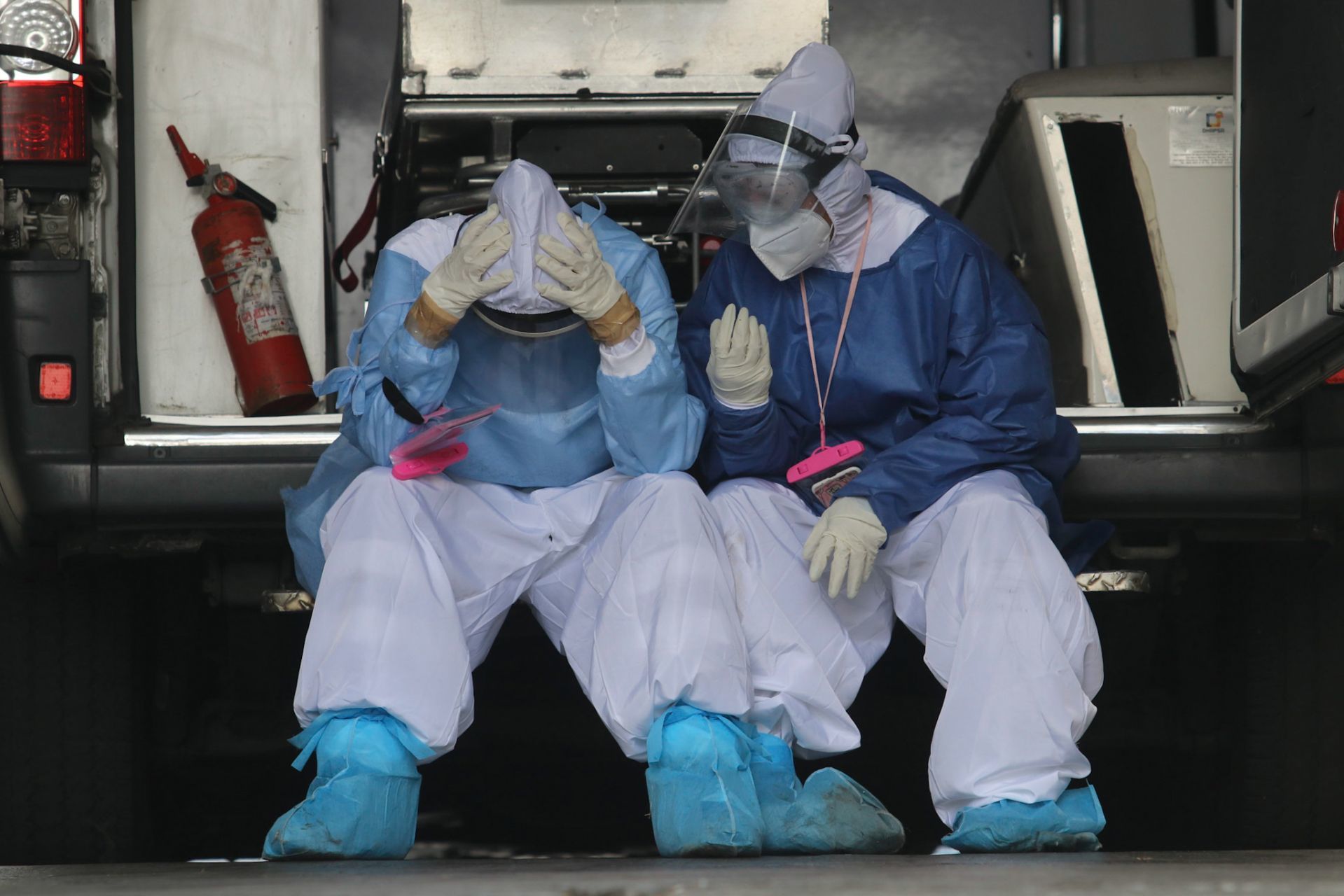 The emergency entrance of the General Hospital of Mexico is surrounded by a makeshift camp of relatives of patients who wait between camping chairs, cardboard and tuppers. This center began to reverse its transformation into a covid hospital on August 10 due to the drop in hospitalizations, 139 days after admitting its first patient and after having reached its maximum occupancy peak on May 31, when they had 202 hospitalized patients. But this Friday, with 297 new admissions for coronavirus in the capital – the highest number since June – the environment outside this hospital is reminiscent of the worst moments of the pandemic. Now the beds are being filled to capacity. There are currently 3,916 people hospitalized in Mexico City, which represents 56% of the hospital care capacity. “In urology they have had to suspend surgeries again and attend only emergencies in order to make better use of resources,” complains a young nurse at the doors of the hospital after a 72-hour shift without rest.

A few kilometers from there, the Historic Center lives a parallel reality. Its streets are a maze of shops where thousands of people, some without masks, crowd and collide with each other to buy gifts and Christmas decorations. The streets seem not to pick up the urgent message this morning, when the president, Andrés Manuel López Obrador, and the head of government, Claudia Sheinbaum, asked for a voluntary confinement of the inhabitants of the capital for the season of the end of the year festivities. “If we don’t have anything really important to do, let’s not go out on the streets,” insisted the president in an effort to bring order to the capital. This Friday, the country reported 12,127 new cases of covid-19, of which 4,459 were in the city. Mexico registered 690 deaths, 88 of them in Mexico City.

At the General Hospital of the Mexican Institute of Social Security, the bustle has not yet arrived. Elena Hernández Mendoza waits in this street for the ambulance to accompany her sister to undergo tests. She was admitted two days ago for a cerebral infarction and ensures that in this center, marked in red on the map of covid hospitals due to its low availability of beds, they have been treated without any problem by an exhausted doctor. “The doctors have put on the shirt, they are playing it for us,” he says proudly. This retired nurse speaks in a concerned tone. His sister was found to have a picture of pneumonia and has had to undergo the PCR test, something that Hernández does not understand why if they have followed all the recommendations. That is why it gives her “so much courage” to think that the population “continues to act as if nothing is happening”, like the taxi driver who took her there. “He wasn’t wearing a mask, he told me that he drinks a tea to fight the virus and that’s it,” he recalls angrily. Upon arrival, he witnessed how health workers gathered outside the hospital to pray for a doctor who recently died of the COVID.

The increase in hospitalizations has been unstoppable since the beginning of October, when the availability of beds had reached its highest point. Before the end of the month, the curve changed and began to rise. Since then, neither the reduction in the hours of bars and restaurants, nor the capacity limitation, nor the cancellation of the Day of the Dead celebrations have produced results. Mexico City, along with Baja California and Zacatecas, which returned to the red light this Friday, are among the areas most affected by the pandemic. The capital remains on an orange traffic light to avoid the collapse of the economy. The new restrictions announced this Friday promise to reinforce sanitary measures and filters without imposing the use of a mask or strict quarantines. “The population has already responded very well at the beginning of the pandemic. It is not necessary to take curfews ”, insisted the mayor.

The nurses who take a break from their shift assure that the citizens of the capital are not taking it seriously. “Today I came on the subway and I saw how a man without a mask sneezed into his hand and used it to grab the rail again,” he says with disgust. Among his colleagues there is talk that there is an increasing lack of staff and beds to care for patients. “Even in Pediatrics I have a colleague who tells me that her ward is full and while people think that with an orange traffic light they can leave freely,” he laments. When he gets home, he’ll take a shower, disinfect himself, and try to get ready for the holidays, which he’ll celebrate only with the people he lives with. “This year, my family will spend each one at home,” he says.

In the Historic Center the shopping streets are saturated. The urban labyrinth is an anthill of people pushing their way through the narrow sidewalks and bags of gifts. Christmas music and lights enliven the long lines that form to pass the sanitary filter before entering the stores. To withdraw money from an ATM in this commercial area requires a wait of more than half an hour. Between the horns of crashed traffic, shoppers have to yell at each other for forgiveness every time they bump into each other for lack of room to walk. In the Toy Storm toy store they assure that these crowds are common and that they will get worse as December 25 approaches. Liliana Aparicio, manager of the store, assures that the new restrictions imposed by the Government will not be noticeable in sales. “It will not affect us because people ignore it,” he says with confidence.

On República de Uruguay street, some children pull their mother’s skirts at the doors of an adornment and party store from which piñatas hang. Garlands and Christmas trees are already on offer among balloons and birthday candles. Its workers, who complain that not all customers wear the mask, report how the decrease in both purchases and the value of the items purchased has been noticed. Most of their sales are now for small gatherings, but they admit they still have party orders. They do not believe that the new measures will help curb infections. “Yes, when we were at a red light, people would go out and do what they wanted!” They say with a laugh.