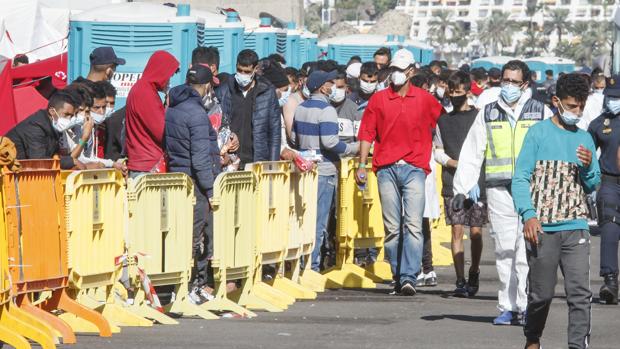 The migration crisis that affects the Canary Islands gives the finishing touch to the tourist activity of the region. The sector, which is immersed in its high season, was already suffering considerably from the effects of the coronavirus crisis. Specifically, the arrival of international tourists to the archipelago so far in 2020 drops 65% and the total overnight stays in hotels falls by the same percentage, and that percentage is expected to increase in this final stretch of the year. Also, “The numbers are bad. We are in the high season months, where occupancy usually reaches 90%. Right now we have 7% occupied by tourists and 3% are immigrants. The losses are incalculable, it is a drama ”, Tom Smulders, vice president of the Federation of Entrepreneurs and Hoteliers of Las Palmas (FEHT), explains to ABC.

Entrepreneurs join the SOS issued by the Government of the region and they criticize the delay of the Spanish Executive in solving this problem. «We have offered perfectly adaptable tourist facilities to accommodate with all the humane treatment that the case deserves. That in the end has been the catalyst for the government to think that everything was under control, ”continues Smulders.

For its part, the Canarias Ashotel hotel association explains that this is not a problem that specifically refers to the Canary Islands, but to the entire country. «The Government is ignoring the requests of the Government of the Canary Islands and the different groups to find a solution. This it’s not going to stop overnight and what you have to do is, while they arrive, redistribute them throughout the Spanish territory, “says Juan Pablo González, Ashotel manager.

In addition, the sector fears that it will move a negative image of the region to potential tourists who plan to go. “If nothing is done, and we hope that the Government changes its attitude, we can have problems of coexistence. There can be a friction with the local population that we hope does not happen, “adds González. That is why he asks that “a dignified exit be found and the quotas distributed throughout Spain, since the problem is with the country, not with the Canary Islands.” They get here because is the southern point but they have no intention of staying here.

Another of the workhorses in which the sector is involved is on the order that will enter from the 23rd in which it is required that all tourists arriving from a risky country bring with them a negative PCR. Entrepreneurs in the sector understand that with an antigen test should be worth, since it is significantly cheaper and its effectiveness is proven. Canary is in yellow color within the stoplight set by the EU, and even the UK and Germany removed it from the restrictions. Smulders explains that the sector in the region complies with an action plan where an antigen test is valid as a test, provided that it is carried out by an approved laboratory.

In this way, from the FEHT they wonder how it is possible that Spain doubts tests carried out by other European health systems “when we are failing”, they explain. In addition, he adds that they are trembling because “instead of receiving reservations, we receive cancellations due to this measure. Tourism is being shielded by the requirement of the PCR when half the world asks for a quick test».

Thus, for Smulders «it is impossible to promote tourism in the months to come. because there are factors that slow it down. We are very disappointed with the government’s management. The good thing is that we are a pineapple and we fight together. Here the unions go hand in hand with the employers. The only enemy seems to be the Spanish State ”, he concludes.