Bewilderment Friday in Ceuta. By surprise and without prior notice, some of the more than 700 Moroccan minors who arrived last May in Spanish territory through the Tarajal border during two days of flooding began this Friday to be transferred back to their country, according to the account of various humanitarian organizations that witnessed the process. Among them were Save The Children and Unicef.

At noon, access to the Santa Amelia resort was cut off, one of the places where these children and young people have been staying since the migration crisis with Morocco. Members of the NGOs were not allowed access, and they were being alerted by the minors themselves and some workers that a transfer device to the border had been put in place.

A white van made two trips from downtown Santa Amelia to Tarajal. There the minors descended and were transferred to the other side in a process at all times controlled by agents of the National Police, as confirmed by several witnesses. About ten minutes to three in the afternoon, a first group of eleven minors arrived at Tarajal. Minutes later, around four twenty in the afternoon, the same vehicle arrived with four more minors. In both cases, the minibus was escorted by two National Police vans, according to the witnesses’ account.

Members of various humanitarian organizations tried to collect data on the repatriation process that had been started and even tried to report the facts to the Juvenile Prosecutor’s Office. “No one knew anything and there was no prior notice,” said Mar Soriano, a volunteer for No Name Kitchen, an NGO that has been following the presence of Moroccan minors in the autonomous Spanish city for months after the border crisis in May.

Four humanitarian organizations working in Ceuta issued a statement of complaint about what happened. They are No Name Kitchen, Elin, Maakum and Andalucía Acoge. The text they made public was this: “Despite not providing any information to the entities present, we have witnessed how several police vans and a bus with groups of minors have left the Santa Amelia emergency resource and have directed to the border with Morocco to proceed to a return against the will of the minors, without respecting the best interests of the minor or the national and international laws that protect them ”.

Complaint to the Ombudsman

“We have filed a complaint with the Ombudsman and we are preparing a letter to send a complaint to the court on duty to request the suspension of the measure,” explained Save The Children sources, who regretted that their team in Ceuta had not been able to prevent the process of collective expulsion or have had access to minors sent to the other side of the border.

The Government delegate, Salvadora Mateos, had hinted last Monday that there would be news in bilateral relations after the new winds that blow between Madrid and Rabat with the appointment of José Manuel Albares as the new Minister of Foreign Affairs. But the delegate did not specify anything about the return of the minors launched this Friday.

“Following the statements of the Government delegate, we think that in the long term something could happen, but what has happened has happened without prior information and without guaranteeing the rights of minors,” said Soriano, a 24-year-old lawyer from Barcelona who arrived a few years ago. month to Ceuta. His organization, No Name Kitchen, which already works with immigrants in Greece and the Balkans, has arrived in the Spanish North African city in 2021. Its objective is to provide health and legal assistance, especially to those who are in a situation of living on the street.

“We followed the van to Tarajal. There the minors got out of the vehicle and put them through a door, ”said Mar Soriano. “We do not know what is happening on the other side,” he added, although some of the children had already managed to send messages from the Moroccan side through their mobile phones.

At the Santa Amelia sports center, enabled to host some 130 of the minors who stayed in Ceuta in May, there was no police presence at mid-afternoon yesterday. At night it was calm. 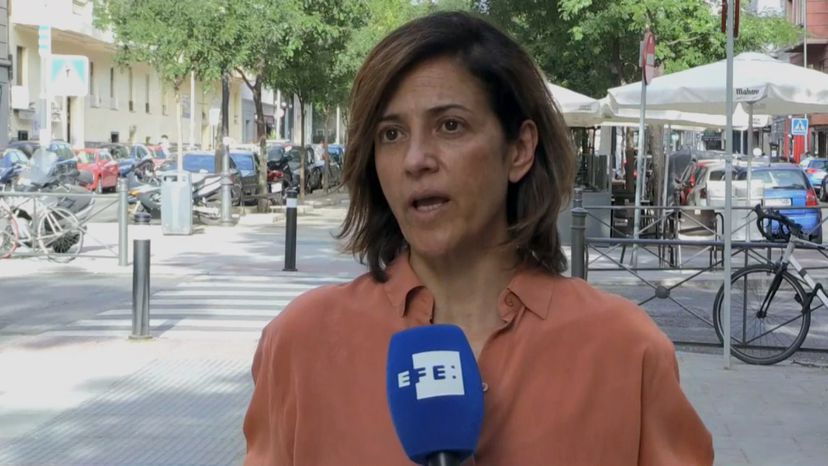 Carmen Molina, the director of childhood awareness and policies at Unicef. On video, Molina denounced this Friday that the repatriation of minors does not comply with legal guarantees.PHOTO AND VIDEO: EFE

Unicef, Save The Children and the Childhood Platform issued a statement last night: “After the events that occurred on August 13, 2021 in Ceuta, in which the Delegation of the Government of the City of Ceuta, in accordance with a signed guideline, the same Today, by the Spanish Ministry of the Interior, what are estimated to be several dozen unaccompanied children began to return to Morocco, the organizations are deeply concerned about the violations of the fundamental rights of children that are being committed through said returns and urge that they be stopped immediately ”.

What happened, they added, contravenes Spanish, European and international laws because “a return can only be contemplated when 1) it is in the best interests of the child, 2) the safe reintegration of children in their country of origin is guaranteed, 3) that said return is voluntary and 4) and that the minor is heard throughout the process ”. The authorities of the country to which they arrive, they add, must allow, in addition to evaluating the child, “the durable solution that best responds to their needs and well-being.” All this “before any decision about its future is made.”