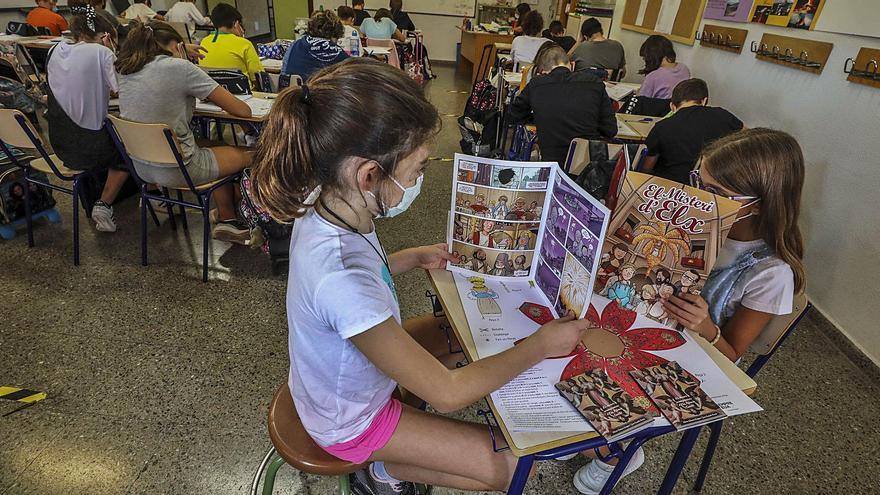 For a few days, the educational centers of Elche have in their classrooms with three work materials that ultimately bring the Misteri in a pleasant way to young people and also to teachers. Specifically, it is a cut-out of the Magrana, a book with the Assumptionist mysteries of the Valencian Community and a comic, all using the native language.

The Agència de Promoció del Valencià d’Elx (Aviva Elx) is an office dependent on the Department of Linguistic Promotion that carries out a silent but continuous work, and if it were not very complicated it would be that the local administration could use the native language correctly in all its official acts and communications. Its staff also help to make this World Heritage Site known in Valencian.

The initiative has been carried out thinking, on the one hand, of the recent celebration of October 9, but also taking advantage of the reactivation of the La Festa representations now at the end of the month when the low incidence of covid will allow it.

With this excuse, hundreds of copies have been distributed, which have reached institutes and schools, but also departments of Valenciano, as it cannot be otherwise.

This “gift” is being participated mainly by students, but also directors and teachers, who see in these work materials an opportunity to, on the one hand, contribute to the promotion of Valencian and, on the other hand, so that minors As you assimilate, approach in a pleasant and attractive way one of the signs of Elche’s identity.

“The Misteri d’Elx is our icon of language protection”, recalls the mayor of Linguistic Promotion, Carles Molina. In fact, a part of La Festa is sung in Valencian.

The truth is that these school materials are not the first time they have been published, but they do arrive at a very appropriate time and that they advance the imminent celebration of the sacral-lyrical drama. In this way, the classrooms also prepare the environment prior to the stagings in Santa María, so that in one way or another all the citizens of Elche are involved in this autumn cycle, each one in their own way, even if it is dedicating some few minutes, from the reading, from the classroom, and even without having to go to the temple.

In 2018, the Elche City Council already distributed this cut-out of La Magrana, a fun way to get to know one of the essential elements of La Festa, as well as being an activity that attracts the most attention and surprises the little ones. On this occasion, about 2,700 copies have been distributed for the Primary quarter.

As then, the initiative resurfaces with the intention of introducing the Mystery in the classrooms and with the aim of recovering the manual work in the classrooms in the middle of the digitization stage. Scissors, glue and patience is the only thing necessary to assemble this Magrana. Something similar happens with the comic. The precedent is in 2012 when the Patronato del Misteri d’Elx and the Valencian Academy of Llengua published a comic to spread La Festa among Elche schoolchildren, of which more than 5,000 copies were distributed in educational centers. Now about 2,000 have been distributed.

Specifically, eight comics have been distributed per classroom in all fifth and sixth grade of Primary. The book with the Assumptionist mysteries has also ended up in these courses.

The Valencian Academy of Llengua (AVL) declared 2018 the Year of the Valencian Assumptive Mysteries of Elche, València and Castellón. For this reason, the AVL published this commemorative book of the three mysteries, prepared by the people of Elche Hèctor Càmara and Joan Castaño and of which a thousand copies have now been delivered.

This set of elements allows us to take another step towards linguistic normalization and bring the world of La Festa closer together in the framework of the extraordinary performances that will take place at the end of October and the first of November.

The mayor of Linguistic Promotion, Carles Molina, with the publications and the cut-out in Valencian. | ANTONIO AMORÓS