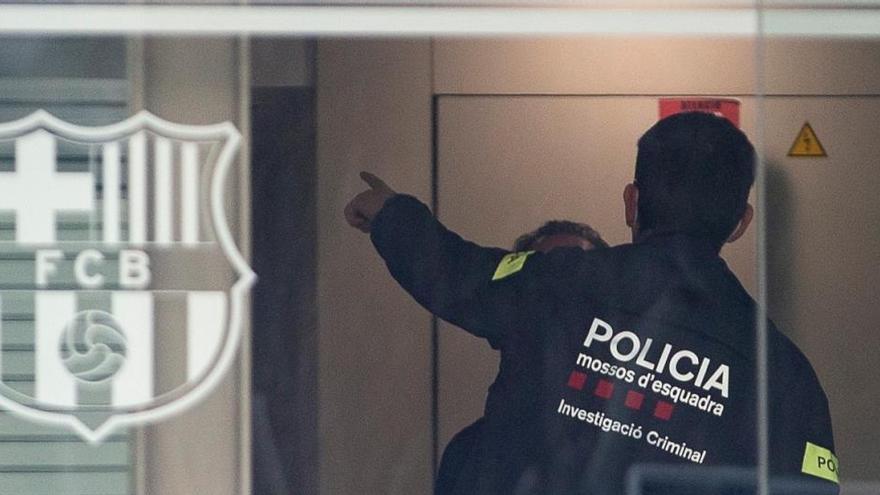 The Mossos d’Esquadra consider that the “the damage” caused to Fútbol Club Barcelona by its former directors as a “direct product of exceeding their administrative powers” in the so-called “Barçagate” ranges from a minimum of 843,300 to a maximum of 1.2 million euros.

This is what the Catalan police maintain in a report, to which they have had access, included in the summary of the case, for which the former president of FC Barcelona was arrested yesterday Josep Maria Bartomeu and his right hand, Jaume Masferrer, as well as the club’s general director, Óscar Grau, and the head of legal services, Román Gómez-Ponti.

According to the Mossos, in the investigation carried out “It has been possible to link to companies hired by FC Barcelona with the creation and feeding of different profiles on social networks that defamed critics of the board of directors headed by Bertomeu “, for which a” surcharge “would have been paid.

“The damage caused to Fútbol Club Barcelona and its entire membership, a direct product of exceeding its administrative powers, can be quantified so far, and based on the scales estimated by PWC, in a minimum amount of 843,300 and a maximum of 1.2 million “.

However, the Mossos added, the total set of money paid over the course of the three seasons to the Nicestream group “for a monitoring service and in parallel for an allegedly particular use in social networks it amounts to 2.3 million “.

The total amount committed to the contract, adds the Catalan police in its statement, “exceeds 3 million euros”, a part of which is pending payment since the club, as a result of the publication of the case by the press, unilaterally terminated the contract in the middle of the season.

For the Mossos d’Esquadra, it exists “one last damage” for Barça that “comes directly from unfair management and its effects.”

It is, adds the statement, the criminal complaint for insults and slander that last February presented the owner of the production company Mediapro, Jaume Roures, against FC Barcelona.

Said complaint, according to the Catalan police, is in the initial phase but in the future “could again entail the payment of compensation by FCB Barcelona for facts that are a direct consequence of the contracting of services that make up “the case.

For the Catalan police, the facts investigated “may have a place in the so-called corruption in business, depending on the different considerations or possible benefits of any kind that the directors, administrators, workers or collaborators “of Barça” could have received in exchange for awarding that contract outside of the established procedures “.

For this reason, the Mossos deduce that “money from the club would have been used for allegedly private purposes (for personal benefit), in particular, with defamatory content about people contrary to the club’s management and to the detriment of the entity’s own assets “.

On the other hand, it has been known that the company I3 Ventures, hired by FC Barcelona, ​​drew up a black list of journalists critical of Josep Maria Bartomeu’s board of directors and members of the Barça club environment that was exposed in an internal email on June 7, 2018.

According to what appears in the police report that EFE has been able to access, included in the summary of the judicial investigation of ‘Barçagate’, there are five journalists (Jordi Costa, Gerard Romero, Frederic Porta, Xavi Torres and Oriol Domènech) and a radio show (‘El Club de la Mitjanit’ on Catalunya Ràdio) who appear as opposed to Bartomeu for I3 Ventures.

Jordi Costa, presenter of the program ‘Tot Costa’ of Catalunya Ràdio ‘, is considered that “He permanently criticizes Bartomeu and the board, and is independent.” About Antoni Bassas, journalist for the ARA newspaper and current right-hand man of Víctor Font in his candidacy to preside over Barça, it is specified that “His wife was fired by Barto.”

Of the same Font it is said that it has “lack of knowledge, investment fund, does not know football, he owns a medium (if you are the owner of a medium, you clearly have conflicting interests) “.

About the founder of Grupo Mediapro, Jaume Roures, I3 Ventures writes: “Talk about being part of the club’s mafias (Do a club mafia report?), that Roures participated in all the corruption processes of the club (tone down the independence issue, not to mention that it is pro-independence in order not to make pro-independence supporters blindly to corrupt people, for example) “.

And regarding the player representative Josep Maria Minguella, who was recently part of the candidacy of Emili Rousaud, it is explained that he has “zero credibility, he is a commission agent, when they threw him out, he put his son in his place believing that Barto is stupid. ”

In addition, other names from the Barça environment appear on the list such as Albert Roura, former director of communication for Barça and current director of communication for Víctor Font’s candidacy; Xavier Sala Martin, economic vice president during the mandate of Joan Laporta; Maria Elena Fort, Laporta board of directors and current member of the former president’s candidacy; and Laporta himself.

The police report says that “comments are included to try to discredit, one by one, these people, indicating from the beginning that the interest is particular to Mr. Josep Maria Bartomeu, not to the club, creating a kind of black list of journalists “.

This is one of the clues that was found in the offices of Nicestream (the parent company of I3 Ventures) during the search. According to the report, the email was to set up a meeting.