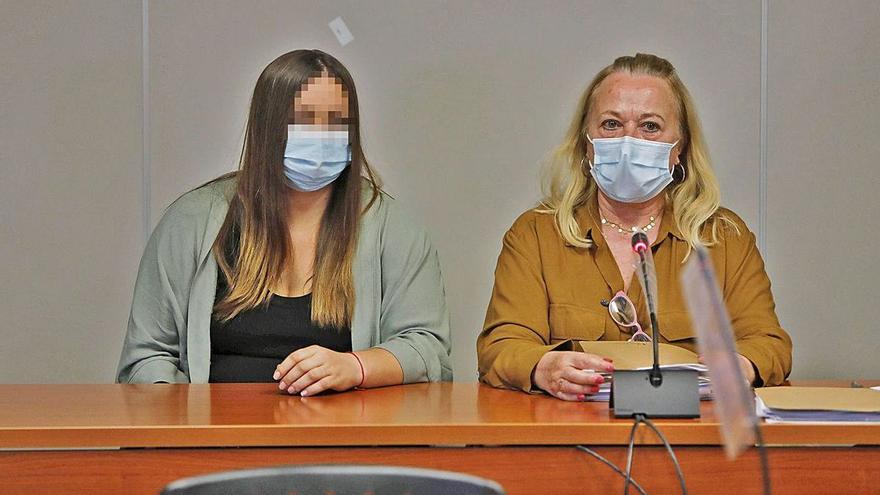 In order to Maria GM, the mother of the children murdered in Godella in 2019, the sole perpetrator of the deaths of Ixchel, five months old, and his brother Amiel, three and a half years old, is his father. “Gabriel had planned to kill the three of us and I wanted to go crazy, he was constantly talking to me about the sect, “he declared this Wednesday the defendant, unimpeachable for the paranoid schizophrenia disorder that she suffers, and that now, stabilized with the medication, she sees with different eyes her relationship with the accused and all those delusional and persecutory beliefs that, according to her, he was putting into her head, among them that a sect abused children and wanted end their lives.

Likewise, the children’s mother told the members of the popular jury that she was the victim of mistreatment by Gabriel. “I woke up with bruises and told me it was the sect“recalls the woman, who now believes that all those ideas about the sect that persecuted them were to cover their violence both with her and with her son Amiel.

Maria denies that she killed the children. According to her account, in the first formal statement she makes about what happened, the accused assures that around eleven o’clock on March 13, 2019 went to sleep after smoking a joint with Gabriel, and that he stayed awake since that night it was his turn to stand guard. María confirmed that they did hold vigils at night to protect themselves from the alleged sect, a fact that the defendant denies despite the newspaper in which annotations of said night watches are collected. “He said that they came to steal genetic material and puncture us with hormonesHe assured me that we were in danger of death for all that we knew, “the defendant explained in her statement.

When it was dawn she woke up disoriented and When he left the house, he found the lifeless bodies of Ixchel and Amiel.. “I was so aware that they wanted to kill us that I thought the sect had killed them,” argued the young woman, who admitted that she buried them because she could not leave them like that and went to look for Gabriel to escape before they killed them.

María acknowledged that when Gabriel entered the house he was already awake and asked him where the children were, which does coincide with what the accused said. From this point on, Mary’s testimony becomes stranger. On the one hand he explained that he told him that they were at their mother’s house, because at that moment he thought that he was also part of the sect, although when they went there he remembered that his mother would also be dead because Gabriel had performed a satanic ritual to end the life of his mother-in-law. In the same way, he talks about jumping into the well to look for them, because Gabriel told him that they were there, ignoring that he had already admitted to having buried them.

According to forensic psychiatric reports, the defendant suffered an acute outbreak of her illness that morning, hence the Prosecutor’s Office asks for his acquittal for a complete defense of mental disorder and request an internment measure for a maximum period of 25 years. In order to the father, whom he considers inducer of the crimes and who participated “doing or letting do”, the prosecutor asks for a sentence of 50 years in prison for two murders.

Maria assures that she idolized Gabriel, that He called himself Jesus Christ reincarnated and told him that she was his Mary Magdalene and that was why they were attacked at night, because “our genetics was important,” said the children’s mother, who admits that “she was naive and believed in conspiracies”, but that it was all because of what her partner told her. “I believed in Gabriel above all things“, Maria affirmed about the importance that everything that the father of her children told her had for her. She even addressed him on occasion calling him” God. ”

I wanted to cover up his illness

On February 19, the accused accompanied María to the psychiatrist at the initiative of her mother. The specialist told them that he only had anxiety. Maria assures that before going to the doctor Gabriel gave her instructions not to talk about the sect because otherwise they would treat her as crazy. Thus, on March 1, when she had a new appointment, her partner did not take her or remind her.

“I think Gabriel has never loved me or the children, we have been an object of satisfaction for his ego,” says María, who affirmed that the accused has pressured him in prison so that she assumes all responsibility, telling him that in his case the penalty would be less, and that he promised to resume a life outside in another new house that he would rehabilitate. “I was excited to be a mother again and believed that he could bring back the spirit of my children.”

“Astral displacements, how to denounce a sect? Blue ghosts, dimensional planes of existence, the ascension of the Virgin or the snakes that venerate the Virgin Mary”, are only some of the searches that appear in the days before Godella’s double crime on the children’s father’s phone. However, he claimed that both used said terminal and that Maria could have made such searches. Of course, he admitted that in any case if he looked for that on the internet he did so for “cultural interest.”

On the other hand, this Tuesday several of the witnesses testified, including friends, neighbors and acquaintances of the couple. Many of them agreed when assuring that both defendants felt persecuted by a sect. They also indicated that It was Gabriel who was continually talking about the Mayan culture, regressions and aliens. A psychologist who met the couple in Rocafort explained that Maria seemed to her to be a coherent person concerned about her children, but that in the last times she saw her her story was more similar to Gabriel’s, totally illogical with direct references to the supposed sect.

On those dates Gabriel and María were overwhelmed because they wanted to evict them from the squatted house in Godella, as endorsed by a witness who had confidence with the accused. He remembered telling him things about the Illuminati, an ancient secret society. In addition, the witnesses recalled an episode about the appearance of Maria’s panties stained with blood on a dead hen, apparently from a supposed ritual.

Of Gabriel’s personality they describe him as a person “strong, dominant, impulsive, who got angry easily and who liked to take the reins”.