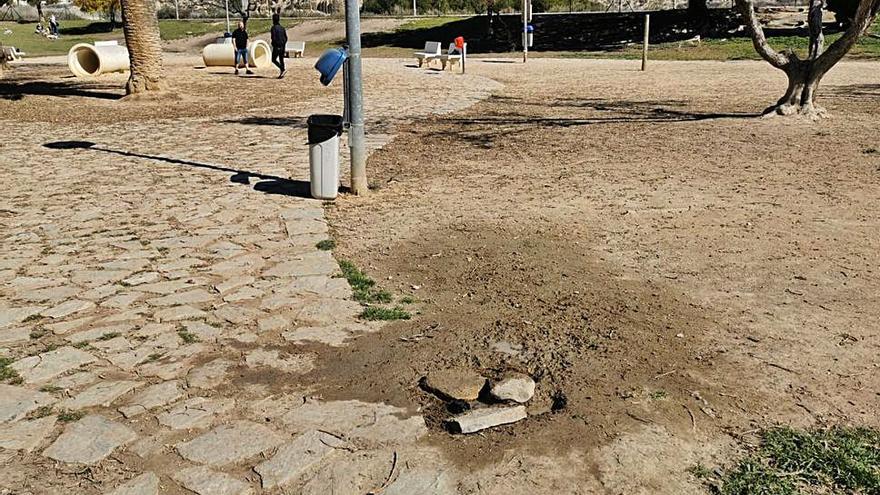 For his part, Oca affirms that the state of the park is not due to lack of maintenance, but to unfair acts and even sabotage of the irrigation system, for which they have had to invest in replacements of 75 sprinklers 1,500 euros in the last year. And he also links the loss of grass to the fact that the park is overcrowded. That is why he announces a project to reforest it.

From Askampe they explain that «the inability to manage the mayor of Parks, together with the necessary incompetence and neglect of the concession company, have left the Muchavista parks and gardens in a sorry state, and especially the Jardines del Mar dog park, the municipality’s flagship project ”.

They regret that «after more than 4 meetings held with Oca and, with two of them in the office of Mayor Juanjo Berenguer (PP), this association let him know the serious deficiencies that the dog park had, one of the most used in the municipality with more than 300 daily entries in summer and 150 in winter. From the association we requested (June 2019) to irrigate immediately since we were about to lose not only the grass but its roots. In case of doing nothing, it would cause the desertification of the area and the consequent financial outlay for its reforestation.

The collective affirms that «Oca, far from paying attention, he also ignored orders that he received from the mayor expressly and directly. The consequence, as of today, is the loss of more than 70% of the grass. With the invaluable help of the concession company ».

Askampe affirms that “the management of Oca is not only ruining the parks and gardens in the area, but it has no financial control” over the work of the successful bidder. In the same way, they point out that «they are dedicated to blame the dogs that break the sprinklers, but company sources acknowledged Askampe that sprinklers are not broken by dogs, but the mowers do it of grass ».

And they also denounce that “over the years that this company has maintained it, we can see that they have been cutting down trees that they did not take care of, leaving the stump. In just 50 meters there are more than 15 stumps without removing ». And they add that «from the association we have been denouncing the lack of maintenance and investments in one of the most visited parks. While in the central park all the children’s games have been replaced more than 3 times, in the dog park they do not even put bags for excrement.

For his part, Oca denied that there is no control over the successful bidder and assured that «there is no lack of irrigation, but a lack of civility. They sabotage sprinklers by breaking them, putting stones on top, stepping on them … We have spent 1,500 euros on sprinklers in a year… And also, there is another problem, the park is overcrowded “, as he points out that there are days that 80 dogs coincide there at the same time, mostly on weekends, and with so many pets the grass ends up disappearing. Therefore, together with the project that they are going to promote to reforest it, we will see if a consultation is made to decide whether to replace the lawn, but for this, the capacity will have to be limited, or it is replaced by albero, since “With the current number of dogs, the lawn is unfeasible”. And the best time to close the enclosure to proceed with its reforestation will also be valued.

In the same way, he pointed out that Askampe’s complaint is “strongly politicized” at a very delicate moment between PP and Cs, and that “at no time has the mayor ordered the park to be repaired as they say,” something that also depends on the council of Treasury, in the hands of the PP, I injected the money, he added.