It was one of the tourist icons of Hong Kong and has gone under. In the midst of its mysterious journey to Southeast Asia, the huge ship Jumbo Floating Restaurant capsized last Sunday in the South China Sea, near the Paracel Islands. Causing a stir in Hong Kong, her shipwreck is a sad metaphor for the loss of historical memory in this former British colonywhich on July 1 commemorates 25 years since its return to China.

Inaugurated in 1976 in the image and likeness of an imperial palace from the Ming Dynasty, its three floors rose above a 76-meter-long roof and its total area of ​​13,000 square meters could serve 2,300 diners.

Profusely decorated with dragons, pagodas and bright neon, its ornate red, green and gold façade stood out among the yachts docked in Aberdeen Harbour, in the southwest of Hong Kong Island. Since it opened its doors 46 years ago, it is estimated that more than 30 million people have passed through its sumptuous halls, some as illustrious as Queen Elizabeth of England, former United States President Jimmy Carter and movie stars such as Tom Cruise. .

With its peaked roofs illuminated at dusk, it was so spectacular that it served as the setting for the adventures of James Bond in ‘The Man with the Golden Gun’ (1974) and Jackie Chan in ‘The Protector’ (1985). Coincidences of destiny, inside the end of the movie ‘Contagion’ was shot (2011), which was inspired by SARS but was a Hollywood premonition of the current Covid pandemic. 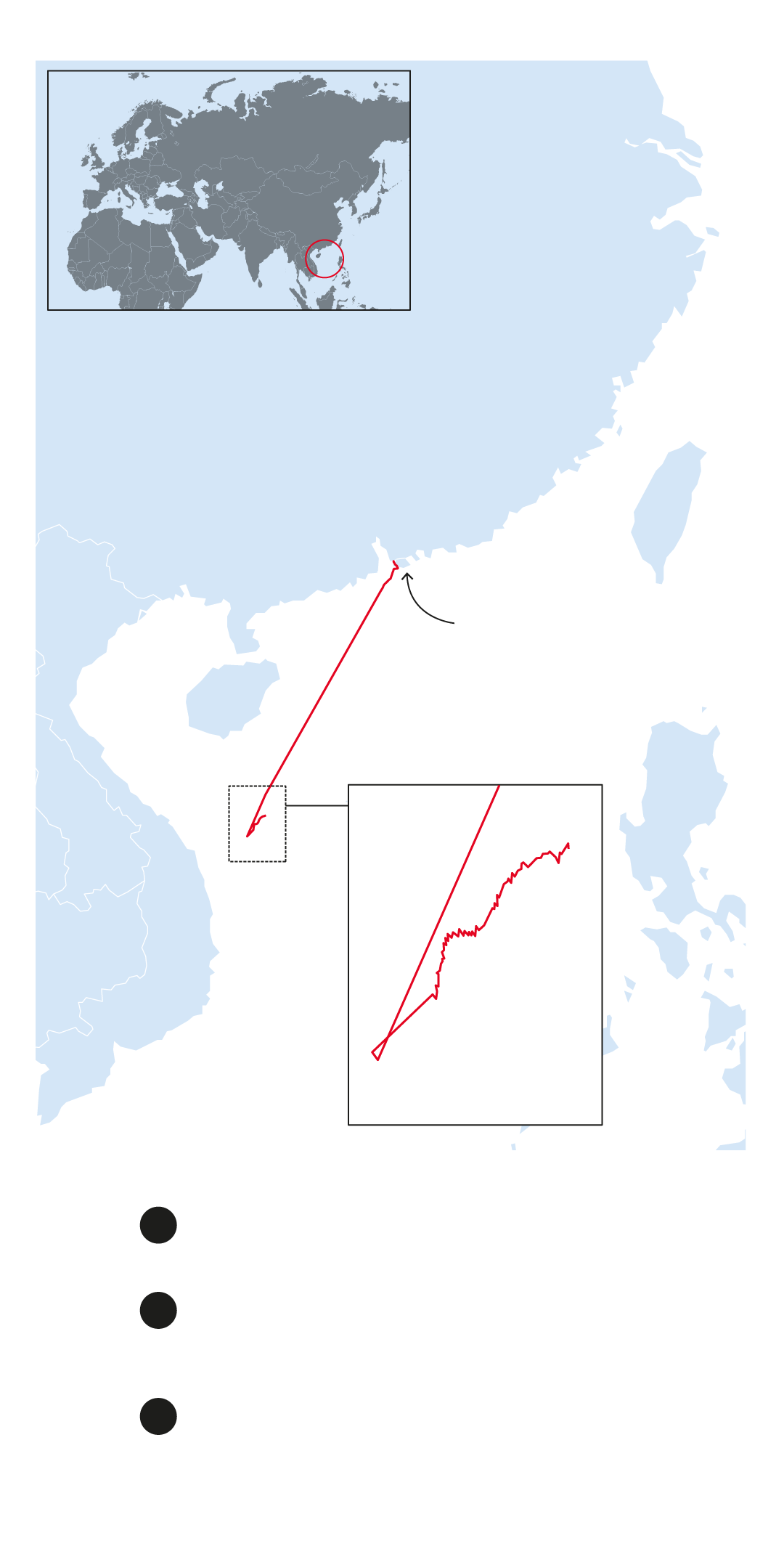 June 18: Arrival at the Paracel Islands

June 19: Sudden change of course and zigzag until the shipwreck

to the paracel islands

June 19: Sudden change of course and zigzag until the shipwreck

For the Jumbo, that was his lace. When the coronavirus stopped the world after its outbreak in Wuhan in January 2020, the restaurant had already suffered from a lack of customers since the previous year due to the violent protests demanding democracy in Hong Kong. Without the Chinese tourists who once flocked to it, the company that ran it, Aberdeen Restaurant Enterprises, was running up bills to maintain such a colossal and sensitive construction. Closed since 2020, its losses amounted to 100 million Hong Kong dollars (12 million euros), a “heavy financial burden” as its owners publicly acknowledged.

Gone are the golden years when billionaire Stanley Ho, a Macau casino tycoon, had invested 32 million HK dollars, that is, Hong Kong dollars (3.8 million euros) in the largest floating restaurant in the then British colony. . Following the tradition of the “tanka” sailors of the Chinese coast, who since 1920 served seafood in their junks, The Jumbo began to be built in 1970 next to other floating restaurants in the port of Aberdeen. But it was damaged in 1971 by a fire that killed 34 people. After acquiring its structure, Ho took five years to complete it and spent HK$16 million (€1.9 million) on its equipment and HK$10 million (€1.2 million) on its decoration. In addition to the throne that dominated its largest hall, whose golden dragons took two years to carve out of wood, a mural on the second floor inspired by a Ming painting was worth six million HK dollars (726,000 euros).

But neither its artistic nor historical importance have been able to save the Jumbo, which was connected to two other smaller floating restaurants. One of them, called Sea Palace, was sold and transferred to Manila Bay in 1999, where it was operational until its closure in 2008. Three years later, it was taken to the Chinese city of Qingdao, where it is still moored without any use. The other, Tai Pak, continues in the port of Aberdeen, but with no prospect of opening due to the strong restrictions due to Covid that are suffocating the economy of Hong Kong and China. United, these vessels formed the Jumbo Kingdom.

Led by Lawrence Ho, son of the late casino magnate, the parent company, Melco International Development, has been trying hard to sell the ship to other companies. They must have seen it so badly that none of them wanted it. Added to the high costs of maintenance, insurance, permits and inspections was the fact that, on June 1, a 30-meter roof with a kitchen connected to the back of the restaurant had overturned. Despite popular calls to save it, the Hong Kong government did not come to the rescue either and, due to the lack of a third partner, the plan to relocate it to the Ocean Park theme park fell through.

“We have clearly indicated that the Government has no plans to invest in the operation of the restaurant because our mission is not to manage these facilities, ”announced the chief executive, Carrie Lam, despite the fact that the reopening of the Jumbo was one of the projects to revitalize the Southern District of Hong Kong. Ignoring this promise, Lam made it clear that “we will not force a proposal that is unfeasible or that requires a large amount of public money simply because it has been included in the political discourse. I don’t think this situation is a problem at all.”

Picking up on the general unease over the loss of this symbol, Professor John Hanzhang criticized the government’s decision in an Opinion column in the newspaper ‘South China Morning Post’. “This is just the latest example of Hong Kong’s inability to preserve its contemporary history,” this sociologist denounced. In his opinion, the “policies on antiquities and the unwillingness of the Government to support conservation efforts have had a devastating effect on the local culture. The departure of the Jumbo Floating Restaurant will be a sad continuation of the trend towards the disappearance of local history after World War II, leaving gaps in the city landscape because there will only be pre-war structures and contemporary buildings for future generations.” According to Professor Hanzhang, “transforming the Jumbo Kingdom into a tourist attraction in the Southern District could enrich the city” because “a new generation of tourists is bored with endless shopping malls and skyscrapers. Instead, they want to visit iconic local attractions. Keeping the floating restaurant would give Hong Kong tourism a much-needed boost and help revive the economy in the southern part of the island.”

Also Read  42% of Spaniards are trapped by a sedentary lifestyle

But nothing could change the fate of the Jumbo. Pulled by the tug Jaweon 9, on Tuesday, June 14, he set sail for somewhere in Southeast Asia, which his owners refused to disclose. But she was shipwrecked on Sunday the 19th when she encountered “adverse weather” off the Paracel Islands, in the South China Sea. As reported by its owners on Monday, “the boat capsized when water entered it and it is impossible to rescue it because It is in an area that is up to a thousand meters deep. Given the outrage unleashed by this mysterious incident, which has echoed throughout the world, the company that owns the restaurant now clarifies that “it has not sunk”, only “overturned”. But it remains unclear where it was located or why it was thrown into the sea for such a long journey instead of being transported on a semi-submersible deck, a more expensive but safer method.

The end of a heavy load

The Hong Kong Maritime Department, which has revealed that the ship was heading to Cambodia and had its approval to sail, has opened an investigation to clarify the incident, since the HK01 news portal ensures that the convoy changed course during the traversed and zigzagged around the Paracel Islands. In addition, the authorities warn that the owners they could have violated maritime laws by taking more than 24 hours to report the shipwreckwhich started on Saturday. Waiting for what the insurance discovers, that it is not yet known if he had it contracted for such an expedition, many suspect that its owners have gotten rid of the “heavy financial burden” of the Jumbo by burying it at the bottom of the sea.