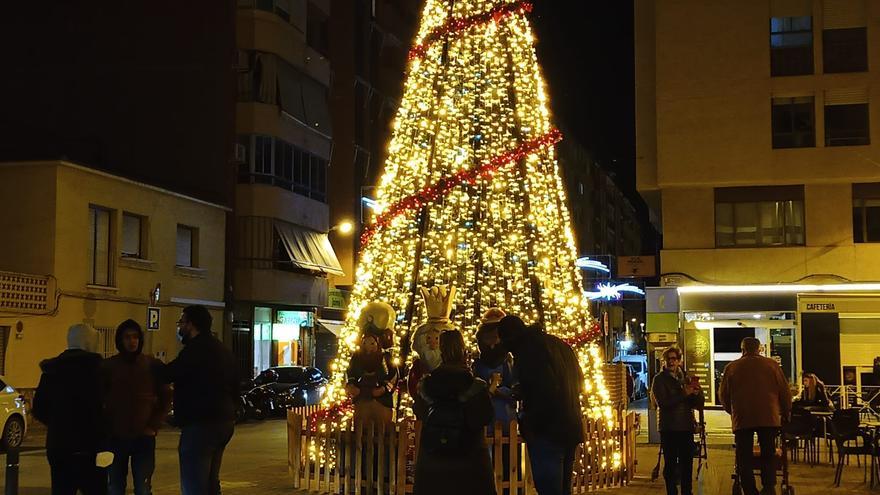 At the end of the year and coinciding with the Equator of the Consumer Bonds campaign, the Christmas commercial campaign arrives in Sant Joan d’Alacant #NadalEnSantJoan.

A campaign that, for yet another year, has the collaboration of the departments of Economic Development, Commerce, Communication, Festivities, Culture, Youth, Children and Seniors, coordinated by the Local Development Agency, to together, conjure the magic of christmas with initiatives to promote business activity in small businesses, the development of traditional Christmas festivities, and the realization of activities for young and old. All this makes Sant Joan the place where the purchases, alone or with family, they become more than just purchasing products.

Figures of the Magi next to the tree.

The Councilor for Economic Development, the Socialist Manel Giner is hopeful about the positive data from the Spanish economy and its projection in the local economy, hoping that «as it happened in the past two editions, the #NadalEnSantJoan campaign will turn Sant Joan into the rcommercial and leisure efferent for many residents of the region, having guaranteed the safety of consumers and their families, implementing all the prevention measures against covid dictated for the enjoyment of events and activities, as well as in all their purchases and drinks. Sant Joan has the largest continuous commercial area in the region of l’Alacantí and with a great tradition of attention and service to consumers ”.

To the € 300,000 invested in the Consumer Bonds campaign, which ends on December 20 and of which many of the 63 participating establishments are already beginning to use up their available vouchers -so it is recommended not to delay-, the effort made in the christmas lights booster and the ambient sound in the streets of commercial activity and market, as well as the placement for the third consecutive year of a 11-meter tree in the Plaza de La Constitución that this year, and as a novelty, it is accompanied by a second tree located in the Maisonnave square.

Likewise and in support of the Bonfire construction sector, so affected by the pandemic, figures of Santa Claus and their Majesties the Magi, by way of photocall.

Visits are expected these days, as in previous editions, from consumers from El Campello, Mutxamel, Xixona as well as from the beach area and the capital, areas in which, as was done with the Consumer Bonds campaign , we have proceeded to Mail the #NadalEnSantJoan campaign diptych which is being made known through social networks, the written and digital press, and through radio and television, which is a very important and innovative communication effort by the Department of Institutional Communication.

The Christmas campaign in Sant Joan started on the 4th with the lighting of the Christmas lights and will host activities until 6 January.

The Christmas campaign in Sant Joan started last day 4 with the lighting of the Christmas lights and until January 6 will host activities such as Christmas party at the Salvador Gosalvez Alberola Senior Center; the Santa Claus House in the Plaza de España, where the elves will collect from girls and boys some of the letters that have been distributed among the shops; the ice rink; a Christmas mascletà and the bonfire burning at Christmas; different Escape Room; different shows; Christmas to the carrer or the shows offered by SSMM The three wise men, among many other activities that can be consulted in the campaign brochure or on the municipal website within the Economic Development area and which is complemented with all the Cultural agenda already usual and full of quality activities for all audiences.