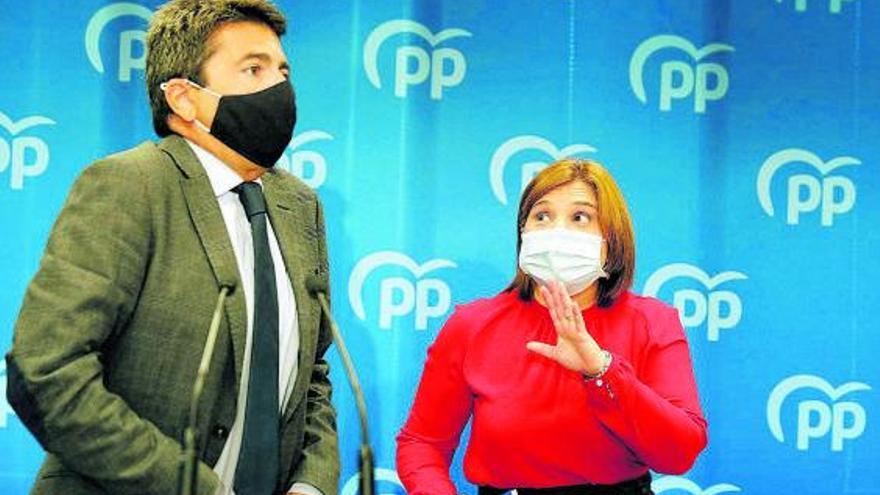 And it is that in Madrid they do not walk with respects and from the general secretary of the party, which controls Teodoro García Egea, An offensive has begun that leads Bonig to take a step back and renounce to present his candidacy at the next regional congress.

These days in which Bonig has frozen his public agenda to meditate what to do, the leader would have verified the personal and political cost that can be involved in facing a Genoa that has already shown in other territories that its hand is not shaking. In fact, as this newspaper has learned, several local officials have already received calls with the warning that supporting Bonig could have consequences.

Sources from Bonig’s environment maintain that the leader has not made the decision and that she will wait to be clear before pronouncing herself, something that could last until the Madrid elections. Bonig, who has been without an agenda since Friday (that day the visit to Genoa would have occurred), yesterday avoided the press and did not attend the plenary session of the Cortes in the morning in which the vice president, Monica Oltra, gave explanations about the case of sexual abuse of a minor for which her ex-husband has been convicted.

Yesterday was an important day for the PP, but Bonig was not in his seat, and his right hand only appeared in the hemicycle for a few minutes, Eva Ortiz. He had, according to official sources, meetings in the party and in the offices of the Cortes. The regional president went to the chamber to eat, but was not seen by the press. Today President Puig must reappear in the control session, but his intention is to remain silent.

However, it is a fact that the also popular trustee is increasingly lonely. In the Valencian PP there is a generalized opinion that if Bonig ignores Genoa and launches his candidacy it is a political suicide since he lacks the key support: that of the provincial structures that he has been gradually losing since Pablo Casado arrived in Genoa.

First it was Alicante, then Valencia and recently Castellón, a territory where Bonig has seen first-hand the difficulties of an alternative candidacy to the official one. In this province, the pressures against the candidate Carmina Ballester have been enormous, say popular sources. Until a few days ago, Bonig assured that he would have no problem fighting in the primaries with any candidacy. He has always defended them, but the reality is that the formula implanted in the party is a trap, since the last word is held by the compromisarios and controllable by the provincial leadership.

In addition, with the context of the pandemic and capacity limitations, telematic voting (which has finally been chosen in Castellón) takes blank votes out of the equation while the use of an application that controls Genoa gives less security anonymity than face-to-face voting.

Bonig also never had that army she dreamed of when she took the reins of the party and, although over time she achieved certain complicities, she has never had the influence and control that others did. In addition, he has seen how former president Francisco Camps returns to the scene and encourages another candidacy that could agglutinate the discontent of those sectors of the party that fear a landing in Alicante and reject the “finger” of Genoa.

With few options to retain the presidency, Bonig’s decision is articulated in other parameters: that of principles. For the regional leadership, but it is also an opinion shared by other voices, Bonig does not deserve such an end, especially when recovering the Generalitat could be closer than ever. Those who defend its continuity point to the erosion suffered by these years of crossing in the desert in the opposition to the head of a party ravaged by cases of corruption.

The other element that is on the table is more prosaic: his fit in the game once the relief is consummated. Genoa has always been concerned about what worthy exit was given. The movements in Castellón and the promise to the former president Alberto Fabra to top the list to the Senate would have cleared the post of territorial senator, but it is an exit that Bonig does not want.

Another issue that remains to be resolved is whether she will accept, if she throws in the towel, to continue as a trustee in the Cortes, that is, to continue bearing the weight of the opposition knowing that the fruits of this work will not be collected by her.

The weakest link in the Genoa plan is precisely the lack of visibility of Mazón in the nerve center of politics, that is, in the Valencian parliament with a group, moreover, very tailored to President Bonig.

Carlos Mazón moves to pave the way in the match

The president of the Alicante Provincial Council, Carlos Mazon, tries to put himself in profile before the earthquake that runs through the game, but that does not imply that he is with his arms crossed. The leader has been moving with discretion for a long time despite the fact that he has publicly ruled out several times that he yearned for the party presidency.

One of his latest movements that has transpired is the making of contact with former president Francisco Camps, reflected in a conversation that Camps himself aired in an interview. Sources close to Mazón admit the talk, but they take away its significance by indicating that it was a brief meeting in the middle of the street and with an informal content. However, other sources point out that the conversation was not so inconsequential and that it took place at the request of Mazón, who would have been interested in Camps’ intentions in the game.

The meeting, which took place before the mayor of Ayora, José Vicente Anaya, launched his candidacy, could even have precipitated the operation for fear of pressure from Genoa.

At this moment of high voltage in the party, other sources point out that Mazón would also have negotiated with Toni Cantó, who already openly admits that it is in his plans to return to Valencia and “lend a hand” to the PP. Outside the lists of the Community of Madrid and with the unknown whether it will be relocated in a future Government of Isabel Ayuso, it is a piece appreciated by Casado and that the Valencian PP could have to fit in in the short or medium term.