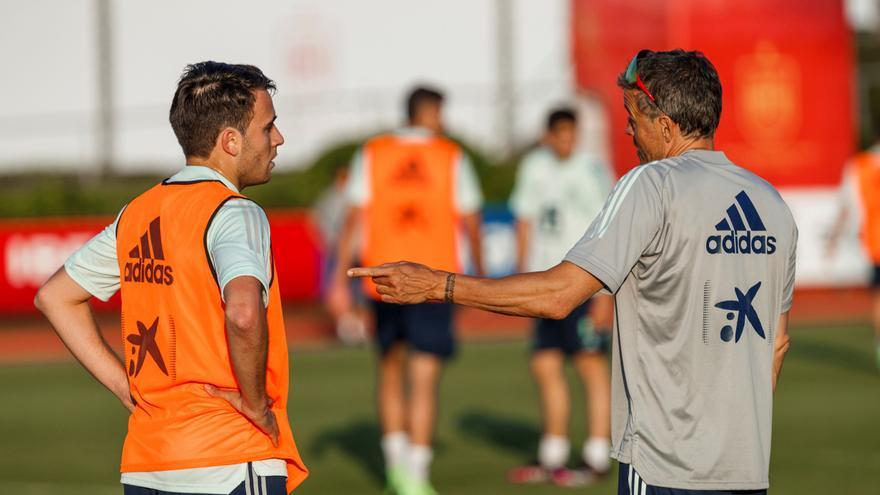 Four days after the start of training, the Spanish team accelerates its preparation for the Euro 2020 against Cristiano Ronaldo and Portugal, the current European champion, who submits a reliable test to Luis Enrique’s team, pending test, verify and resolve various details at the Wanda Metropolitano stadium, with an audience 14 months later.

In the continental reign of Spain in Austria and Switzerland 2008 and Poland and Ukraine 2012 -also world-wide in South Africa 2010- he was relieved by the Portuguese team, the current champion of a crown that the Spanish team wants again, although they are other times, a New cycle, of which there is hardly anything left of those triumphs of a decade ago. Nothing else Sergio Busquets and Jordi Alba survive on the list for Euro 2020 since the last title, leading a team that has seventeen debutants in the final phase of a great tournament with the Spanish senior team; that begins a new era without Sergio Ramos, with 180 games as an international, champion of everything, captain and out of the tournament, and transformed into an unknown until he begins to truly compete in the continental event.

In its offensive style, who understands the attack as an inalienable constant in his conception of the path to victory, the last ups and downs in his results, in his game or in his hitting in attack, depending on the moment and the match, affect that feeling when the account starts back for his debut, on June 14 against Sweden at the La Cartuja stadium in Seville.

Because in his last four engagements, for example, Spain has gone from thrashing in an unstoppable, incontestable and imposing way to Germany (6-0), with that resounding triumph that traveled the whole world, to draw at home with Greece (1-1) or to win agonizingly in Georgia (1-2). After those contrasts, they then beat Kosovo 3-1 in their last duel prior to the 24-man list for Euro 2020. In fact, of the last eleven games since Luis Enrique resumed command, last September with a 1- 1 against Germany, the team has only emerged victorious in five of those games (4-0 to Ukraine, 1-0 to Switzerland, 6-0 to Germany, 1-2 to Georgia and 3-1 to Kosovo). At the same time, they drew another five – including a 0-0 in their most recent precedent against Portugal – and were only beaten in one.

In the Wanda Metropolitano, again with spectators in its stands – there was no public in a game at the Atlético de Madrid stadium since March 7, 2020 and 22,590 spectators are authorized for this friendly -, unknowns arise outside the team due to several questions in doubt in the configuration of the eleven for the Luis Enrique Eurocup, of which there may be some signs this Friday or not, because the lineup is another unknown.

Among them is the goal, if he will already give Robert Sánchez, the third goalkeeper so far, or if he will keep the bet of the last six duels for Unai Simón. Five years after the last meeting of Iker Casillas as an international, no one has taken hold or achieved the security and certainties that he demonstrated. It will also be a new test on the right side, where Marcos Llorente points out, capable of playing on either side of the scheme, and will reveal the first formation of the center of the defense without Sergio Ramos or Íñigo Martínez. Eric García, Diego Llorente, Pau Torres and Aymeric Laporte -before his possible debut as a Spanish international- are the competition for the two positions in that demarcation.

Likewise, the choice between Sergio Busquets or Rodrigo Hernández for the middle center; the ownership of the Pedri phenomenon or the composition of the offensive trio, with Dani Olmo, with Álvaro Morata and perhaps with Gerard Moreno or Ferrán Torres to achieve the punch that is needed in a tournament like the one that awaits the national team. Adama Traoré, in principle, is the only casualty due to muscular discomfort that have not allowed him to train with the group all week.

Also Read  Son Heung-min was often overshadowed by Kane, but he can dazzle in his own right | Tottenham Hotspur

Opposite, the current European champion wants to revalidate the title and it will not be easy for him in the group he shares with Germany, France and Hungary, but he will have the opportunity to test himself for the first time against another weight rival, Spain, whom he has only won in six of the 37 games they have faced. Before the Iberian neighbor, Fernando Santos will be able to start drawing the team that will lead to the Eurocup, but still does not have all his players ready and there are several figures, habitual headlines, who are left out of the game in Madrid.

This is the case of Bernardo Silva, João Cancelo and Rúben Dias, the Portuguese from Manchester City who played in the final of the Champions League and have not yet joined the group. Manchester United’s Bruno Fernandes joined training on Wednesday but is not expected to play the 90 minutes anymore. Among the casualties will surely be Gonçalo Guedes (Valencia), positive for Covid-19, and João Moutinho, with physical problems.

Even so, the team that will be able to jump to the pitch will continue to have a level, with a hungry Cristiano Ronaldo goals that he aspires to become the player with the most goals with a national team, since he is six goals from the record of Iranian Ali Daei. João Félix, who plays “at home” despite wearing the Portuguese elastic, and Diogo Jota, who entered the Santos list despite being injured in the last game with Liverpool, may also be in the Wanda Metropolitano. In the midfield, footballers such as Sérgio Oliveira, who had a great campaign with Porto, or Renato Sanches, champion in France with Lille, stand out.

Also Read  These are the best Porsche art cars

Behind, with Rui Patrício under the sticks, Portugal has Pepe and José Fonte’s seniority, and a seasoned Raphael Guerreiro at Borussia Dortmund. After the duel with Spain, the “quinas” will have another exam prior to the European Championship in Lisbon, this time against Israel.