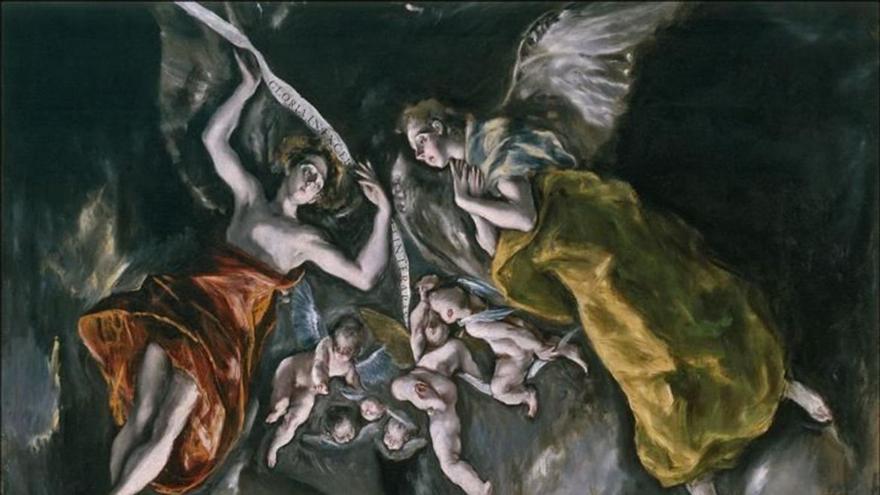 All legends, mythologies, have an oral or written tradition, an image, a minimum principle that leads to a development over the years, over the centuries, depending on its significance or its involvement in the formation of a community. , whose members establish common references that identify them, that unite them, even in debate, in disagreement and difference.

The Holy Family, known as Tondo Doni, a painting by the Renaissance Michelangelo. Below, Romanesque relief and the Adoration of the Magi, by Rubens, found in the Prado.

Christian Christmas comes to occupy the site of a pagan, Roman festival, the Saturnalia, which took place on the winter solstice, from the 13th to the 23rd of December. It established certain practices that were celebrated by the Roman people as an event, prioritizing meetings in large banquets, with the delivery of gifts to family and friends, in the enjoyment of the party and the celebration of life, in response to the fragility and contingency of human existence. When the Christian church is accepted by the power of Rome and is part of it, it tries to suppress these pagan excesses, assuming them and integrating them into the Christian vision of life and religion. And so the Christmas rites begin that will mark the development of our imagination with respect to this holiday.

Adoration of the Shepherds, by George de La Tour, painted around 1645, Louvre Museum. Below, Natividad, by Sandro Botticelli.

Thus the Nativity, Christmas, as an image full of meanings, begins its journey just three centuries after the death of Christ. With Emperor Constantine, the Christian rite is recognized, but it will be Justinian who in 529 institutionalizes the nativity as a hegemonic holiday throughout the empire, which entails the exaltation of its representation. The symbolic elements that make up this celebration and its mode of representation already appear in the stories of the Church fathers, so that artists of all disciplines, commissioned by power, and the people themselves, influenced by them, initiate all a work of illustration, fundamental, to understand this evolution of the image, the text and the relationship between the arts.

First it was the word, the poetry, the text that configures an image that represents values, complex meanings: the family, the son of God as man, the humble adoration of shepherds and kings, the fertility of Mary, the doubt of Joseph … Thus , painting, sculpture, space arts, will define different ways of expressing the same story. The different manifestations of these icons will depend, in part, on the conditions imposed by the artist in defining his work, but also on the social environment and the power that contemplate him.

The representation of this scene, with greater or lesser incidence, began in sculpture before in painting. He took as a model the bas-reliefs of the funerary stelae that, already in Etruscan times, showed scenes from the lives of the deceased. Some manifestations that we have been able to admire in the exhibition held at the MARQ, Etruscans. In the Romanesque we see the representation of the Nativity in the bas-reliefs that decorated the frontispieces of some churches where its most characteristic characters and symbols already appear. In painting these scenes will become more explicit, somewhat later, at the end of the Romanesque and, above all, in the Gothic, one of his first representations being that of Giotto.

Also Read  Kristen Stewart on her portrayal of Lady Di: "I felt like she gave me her approval"

In this process, the personality and intuition of Saint Francis of Assisi will be final. In the year 1223, this man of the Church will promote the representation of the scene of the birth of Jesus with living characters, the traditional Bethlehem, in which the desire to describe the place, the manger, as he read in the text of the apocrypha, with the characters and the circumstances in which the event occurred. Francisco recreates with characters from the town of Crescia, a small town near Rome, in Lazio, the atmosphere of the event to which he gives credibility, above all, the fact of the birth of Christ in a manger, and in this way the first scene appears that will serve as a model for all artists of the moment and later. From then on, the most humble people are invited to represent this scene, the birth of the son of God, with their own means, being the actors themselves. They are very rudimentary representations, scenographies with minimal parliaments, but it was about the people living this momentous and controversial event as the protagonist: the birth of the son of God in the poorest house, of the poorest. Fruit of a woman, with the consequent doubts for the paternity of Saint Joseph. In many Nativity paintings a pensive Saint Joseph appears, as if out of place.

The successive pictorial and sculptural manifestations, the visual and theatrical representations, have treated this event in very different ways, while maintaining the elements established by the Franciscan tradition: the child, Mary and Joseph, the angel, the star, the shepherds, the ox. and the mule, the wise men …, or making significant variations, sometimes, simplifying or inventing various scenographies, introducing the society of the moment and its concerns, with even surreal elements.

Giotto, a Gothic painter, places the action in a cave, manger or grotto, with all the characters and an obvious scenography. As we know, the Renaissance, the Baroque, the Mannerism, will take this genre to its maximum splendor, being very interesting to see how the art of painting and representation is progressively transformed over several centuries, with great artists who will set the standards, from the Giotto al Guirlandaio, Mantegna, Michelangelo, Leonardo, Rubens, Dürer, Van der Weyden, Van der Goes, Velázquez, el Greco, Tiepolo, Correggio, el Perugino, Caravaggio…. And a long list of more or less prominent authors who attest to how these representations are immersed in a vision of the nativity, as an event in which to develop an entire interpretation of styles and images of the most diverse versions, formats and compositions.

Also Read  A dangerous variant of covid-19 has already spread throughout the United States.

This idea of ​​representing Christmas becomes, during the time that goes from Romanesque to Mannerism, a theme demanded by the religious institution and almost forced on different artists. In almost all of them there is an admirable analysis exercise where the creators try to play to compose and alter the scene, giving it multiple visions, some of which, like that of El Greco, create a scene of bodies, of extraordinary foreshortenings and forms, to sometimes twisted, elongated, with an exuberant colorism of absolute modernity for its time. In all the works of these creators you can see the stylistic changes imposed by successive artistic movements, fueled by a desire for innovation, in which each artist struggled to compete with the previous model. Generating disputes about the representation of the images, their relative prominence, the gestures of the characters, the necessary icons. The creators of the new forms break the conception of the pictorial space, creating scenes where different planes appear in the composition. Establishing, in some cases, the division of the painting into a higher plane, that of divinity, and a lower plane, earthly, with the characteristic characters of the nativity. Even, on some occasions and due to the demands of power, real characters of the time are portrayed in them, they make themselves appear there because of their political or ecclesiastical relevance, as if they had lived in those transcendental moments of the birth of Jesus.

The objective was, on some occasions, to represent the scene, from the contemporary vision of its creators where different artistic perspectives converge. In each author, certain preferences regarding color, composition, arrangement of the characters, the number of them and, above all, an important element, the treatment of the light that falls on the scene, highlighting the gestures of the characters stand out. protagonists or other details of the painting, directing the viewer’s gaze. In this definition of light, the innovation carried out by Rembrandt stands out, in whose work the figures appear reflected around a single central lighting, those furthest from the main motif fading into progressive darkness, generating a neutral space of large shadows, where the light cuts out the shapes of those represented.

But this entire process, which we can contemplate in the course of the centuries, of artistic experiences, after this splendor, will be lost, century after century, until it is eclipsed in the middle of the 18th century as an obligatory subject of painting. When the Church loses influence in society or it acquires interest in other topics, directing its gaze towards other realities, other countries, other customs considered exotic, such as the Arab world, artists stop creating the representation of the Nativity, disappearing as a motif pictorial.

The nativity theme, already in the 20th and 21st centuries, has become more of a representation in the media, exclusively on these Christmas days, as a holiday that we identify with consumer culture. Today other values ​​dominate, given the tendency to secularize art, politics, elements of power. But, even so, especially in Spain, in the houses, streets and squares, the tradition of the Bethlehem is preserved, the Bethlehem, as a representation of this cultural heritage, became, to this day, an exercise in popular staging and cultured, domestic, family, palatial and state, present in the big cities and in the humblest villages, indispensable in many of our houses, especially in Spain and Italy. Well, it was in Naples, during the reign of Carlos III, when its presence was institutionalized in all homes. A practice that spread, since they already existed in a humble way, with greater validity to all of Spain and from here to Latin America. Who has not put the nativity scene to celebrate these dates with the children or grandchildren? The motifs of the Nativity scene can be seen ad nauseam, on the dates of December and already from the month of November, in stores and objects more or less of absolutely commercial and design production, many times close to the Kisch. It is the representation of a collective rite, a memory of deep-rooted family traditions that have also suffered the fluctuations of the times and that, still, seek to preserve their representation in the social space that our environment occupies.

Also Read  survivors and the hard road to recovery

One of the most beautiful and important nativity scenes in Europe, we have it very close, is the one created by Francisco Salzillo, 18th century, whose Neapolitan father, sculptor and image maker, based in Murcia, was a decisive influence for him to develop an important sculptural work and to create a large nativity scene, with figures between 25 and 30 centimeters, and a total of 556 pieces, which we can enjoy in the museum that this artist has in Murcia.

The iconography and styles created by Salzillo and the great masters of history, the corporeity of their images, their postures and gestures, are a reference for sculpture and painting of all times, including movement and theatrical space, conditioning the evolution of other performing arts such as cinema, photography. There is an acceptance of these models in the great works of the past. Although we currently reject his concept as reality or fiction, his imagination is in our visual DNA.

The Nativity, finally, is a place to remember, to relive our childhood, which we can hardly forget. But it is also a place for the vision of art, for the analysis of its multiple works that tell us about centuries of relationships, influences and unsolved problems or with solutions to be discovered. This evolution in the development of the plastic arts, in painting and sculpture, is part of the gaze that we forge ourselves over time and the achievement of an intangible heritage, the iconographic and thought of our experiences as human beings.