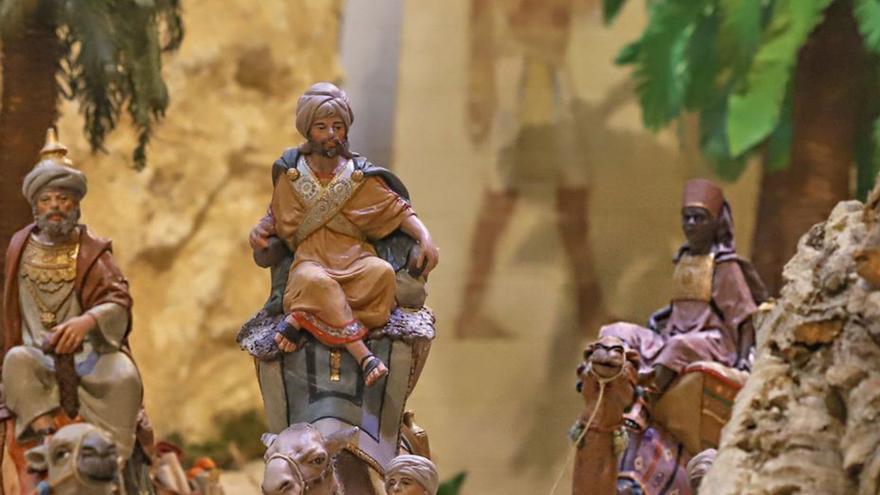 When these dates arrive, we are filled with nostalgia. Loved ones come to our hearts who, although they are present throughout the year, their memories intensify and with them the experiences that we share, not only in childhood, adolescence and maturity, but in our daily lives throughout many years, maybe few.

Christmas comes and goes, it approaches us between lights and gifts, and in the same way it moves away opening the door of the following year, which due to the current sanitary circumstances we see flanking the threshold of the door with the hope that it will really be prosperous. and better this and the previous one. With the confidence that it will return to normality to which we were used.

Every year those customs that our parents taught us and that we have tried to transmit to our children and their children are renewed, trying to keep the tradition within our possibilities in the best possible way.

About ten or twelve days before Christmas Eve, one of the rooms in my house was transformed to set up the nativity scene that every year presented something new, with its mountains made of paste-coated paper and painted brown, white and green. A river made of silver foil covered with a glass was incorporated, through which some ducks glided and next to a bridge there was always a washerwoman and a man fishing. I remember the year when a shepherd joined who was trying to lift a donkey that had fallen and whose load of apples was scattered on the ground. He called him “Antón”, recalling the character from “Los Pastores de Belén” that we saw performed in those days in the theaters of the Catholic Circle and the Festive Oratory.

The nativity scene was practically set up and on the morning of the “Sorteo del Gordo” day, in the class I attended at the Doña Concha Ortega College, we listened to the radio from a neighbor’s home, with the repetitive sing-song of the Children de San Ildefonso, until it was broken by the departure of one of the big prizes.

When leaving the school, a visit was required to see the nativity scene that the family of Pepito Rocamora used to set up, in front of the Radio Luz establishment.

During those days it was obligatory to go to churches and convents to see the nativity scenes, among them those of the Asylum, And that’s how we lived these days when for Christmas Eve dinner and lunch on the first day of Christmas, we would get together uncles and cousins ​​with my grandmother Maria, in the tailoring shop. On Christmas Eve, the “canon boil” was an obligatory dish that I still try to keep as a first course almost every year. For desserts, we sang Christmas carols and later attended the “Misa de gallo” in the Church of San Juan de las Clarisas.

I try, as far as possible, to maintain this ritual despite the years that have passed, and it is curious to remember that in 1896 (twenty-five decades ago), the Oriolan press made little reference to the celebration of Christmas, except in the market prior to the herself. In that year, the eggs were at an exorbitant price that were inaccessible to the poorest. There was quite a crowd of strangers and the stalls were installed until five in the afternoon, the pair of capons sold for 30 reais and the turkey sold for between 20 and 40 reais.

Also Read  'Europe is on the sidelines': Russia meets US in Geneva and NATO in Brussels | European Union

The city changed its appearance and there was a great bustle of people in the streets, inns and inns. In fact, many families traveled to enjoy the company of their children who had not yet taken their vacations at the Jesuit and Jesús María schools, in which recess hours were increased and classes were changed for religious functions and academic. As always on those dates, every year financial aid was claimed for the old men of the Asylum, so that the Little Sisters of the Abandoned Elders could give them some extraordinary food.

“Tempus fugit”, all are memories and nostalgia for what was lived, in which the mark of a nativity scene always remained in a room transformed by a mountainous landscape and a river. With the Magi and their camels, with an intense smell of rosemary mixed with paint, with an inn, with the Flight into Egypt, with chickens, turkeys and clay sheep and with a Baby Jesus in a humble cradle. And of course, with the mythical “Antón”, whom I take care of so that he does not deteriorate and last for many years.