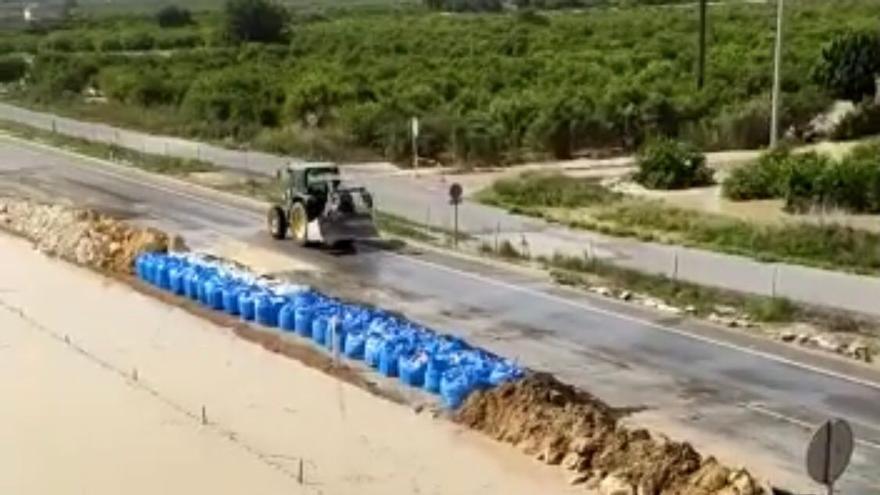 On September 15 (2019), dfter the third break of the river butte, it was decided to blind the drainage of one of the main roads in the south of the municipality (CV-91) and, as a consequence of that action, the waters of the avenue reached the district. That action did not only manage to block the drainage system of the highway, it also blocked the relationship between the residents of Heredades and Almoradí. Just a few months after the floods, the president of the CHS, Mario Urrea, visited Almoradí and gave explanations at a public event. However, since the houses of the residents of Heredades were flooded on September 15, no member of the municipal government team has explained the reason for that action.

The debate around Municipal plan against the risk of floods He confronted the groups of the Almoradidenses corporation with the discontent of the district. Last December it was intended to bring the municipal plan to full and The residents of Heredades let all the political groups know that they would not forgive their approval. First of all, you had to explain in situ, on the one hand, what happened on September 15, 2019 and, on the other hand, what actions would be carried out in the future in the face of similar situations. After probing the impossibility of carrying out the plan, the government team removed the debate on the municipal plan from the agenda. However, given the foreseeable resumption of the face-to-face plenary sessions, it was decided to include the debate on the municipal plan in the March 25 session. The government team wanted to avoid the bad luck of having to debate the plan in front of the citizens. But, even so, they did not give the numbers, what opposition group would betray the legitimate claim of the residents of Heredades? What political group would be so “responsible” to unblock the situation to the government team? The logic pointed to Contigo, a municipal group with a single component.

But, to everyone’s surprise, it was not. Izquierda Unida did not hesitate to approve the municipal plan with its back to the citizens of Heredades. Apparently, the left group negotiated harshly. He committed the government team, on the one hand, not to modify the water course (something that is required by law) and, on the other hand, to demand that the drainage systems of the CV-91 and the AP-7 and that a greater permeabilization of these two routes be carried out. In other words, it committed the Almoradí government team to commit other institutions, of an autonomous and state nature, and, incidentally, prevented the PP from Almoradí from taking over its main obligation: to give explanations to the residents of Heredades . IU did not unlock CV-91 when the residents of Heredades needed it most; but it has unlocked the emergency plan against floods when the PP government team needed it most. Between the haughty disdain of the PP and the tortuous megalomania of IU, the citizens of Heredades see, like absent Almoradians, how the life of the municipality passes and how their claims are parked aside.