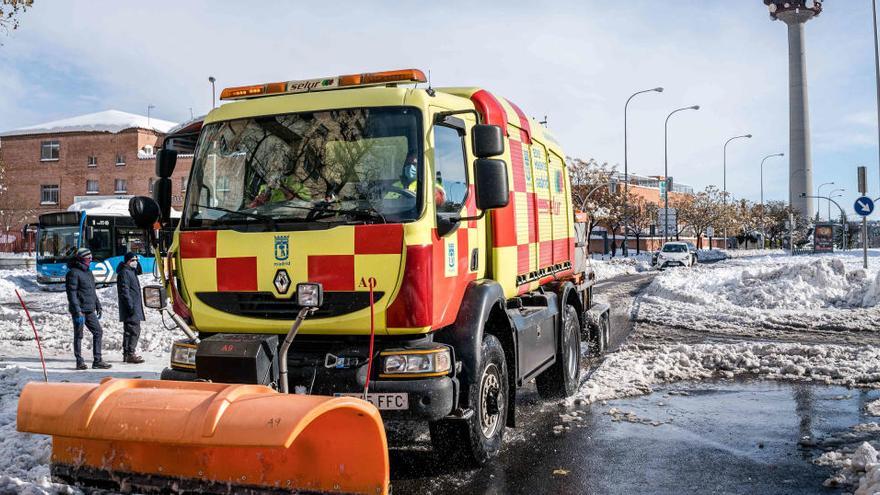 He snow storm that this weekend has covered in white almost all of Spain will give way this Monday to a cold wave that will alert more than thirty provinces due to temperatures that could reach -15ºC, according to the prediction of the State Meteorological Agency (AEMET), which has issued a special warning this Sunday.

During the day, in the Cantabrian and upper Ebro, there is the possibility of weak and scattered rainfall, while in the Mediterranean area, occasional rainfall is expected, which may be in the form of showers and locally intense storms in littoral areas of the Strait, Alboran and the Balearic Islands. The islands of Mallorca and Menorca will be in yellow warning (risk) due to rains.

In the rest of the Peninsula, cloudy intervals are expected, predominantly low clouds in the interior. And in the Canary Islands, the skies will be cloudy and will bring weak rains in general in the north of the islands.

During this Monday, snow levels will continue below 500 meters in the northern third of the Peninsula, and will oscillate between 500 and 800 meters in the Mediterranean area. Although, only in Cantabria the warning will remain this Monday, of a yellow level (risk) due to snow.

Maximum temperatures will tend to rise in the northwest and southern third of the peninsula, and will fall in the rest. So, they will be lower than 0ºC in the Central and Iberian systems and neighborhoods, and also in other areas of the northeast of the peninsula. And the minimums will go down, the decreases being notable in the Pyrenees and the south of the Iberian system. In the Canary Islands, hardly any changes are expected.

In any case, throughout Spain they remain below their usual values ​​at this time, with generalized frosts, more intense in the mountain systems, South plateau and south of the North plateau, with temperatures that may range between -10ºC and -15ºC.

For this Monday, the AEMET has activated notices of different types in more than thirty provinces. Thus, in orange notice (important risk) will be Huesca, Ávila, Segovia, Albacete, Ciudad Real, Cuenca, Guadalajara, Toledo, Lleida and Madrid (for temperatures between -8ºC and -10ºC).

Finally, this Monday there will be a predominance of north component winds, with strong northeast intervals on the Galician coast, and northwest at the mouth of the Ebro, Ampurdán and the Balearic Islands, and the winds will be light in the southern interior of the peninsula. In the Canary Islands, the winds will be from the north and northeast.

The wind will cause bad seas in the Balearic Islands, Catalonia and the Valencian Community. Thus, Mallorca will be in orange notice for waves, while Ibiza and Formentera, Menorca, Barcelona, ​​Girona, Tarragona, Alicante, Castellón and Valencia will have yellow warnings for this phenomenon.

According to the special notice of the AEMET, the storm ‘Filomena’, which has lost intensity after passing through the Peninsula, is already in the western Mediterranean, although in the next few hours there will be showers and some storms in the area of ​​the Strait, Alboran and the Mediterranean area.

Yet from the northwest, the Atlantic anticyclone will spread over the Peninsula, stabilizing the atmosphere clearly starting this Monday throughout the country.

With the arrival of the anticyclone there will be a sharp drop in night temperatures over the next few days, which will lead to a cold wave that will last until Thursday in Spain.

With this cold wave, there will be generalized frosts in the interior of the peninsula, which will be strong in mountain areas and in large flat areas with snowy surfaces, especially affecting the central area and areas of the interior of the eastern half, which is where the most important snowfalls have been registered.

The lowest night temperatures are expected next night, from Sunday to Monday, and also early Tuesday morning, with strong frosts in large areas of the interior, where temperatures below -8ºC will be reached. In mountain areas and flat areas with snowy surfaces, the minimum temperatures can be below -10ºC.

The AEMET also highlights that daytime temperatures, both on Monday and Tuesday, even with a predominance of slightly cloudy or clear skies, will not exceed 5ºC in much of the Peninsula. In mountain areas, and even in flat areas of the central area, they will remain negative throughout the day.

Starting at dawn on Wednesday, a rise in temperatures will begin, especially at night, which will affect half of the peninsula and mainly mountain areas. In any case, the frosts will continue in a generalized way in the interior of the peninsula, although not with the intensity of the first days of the week.