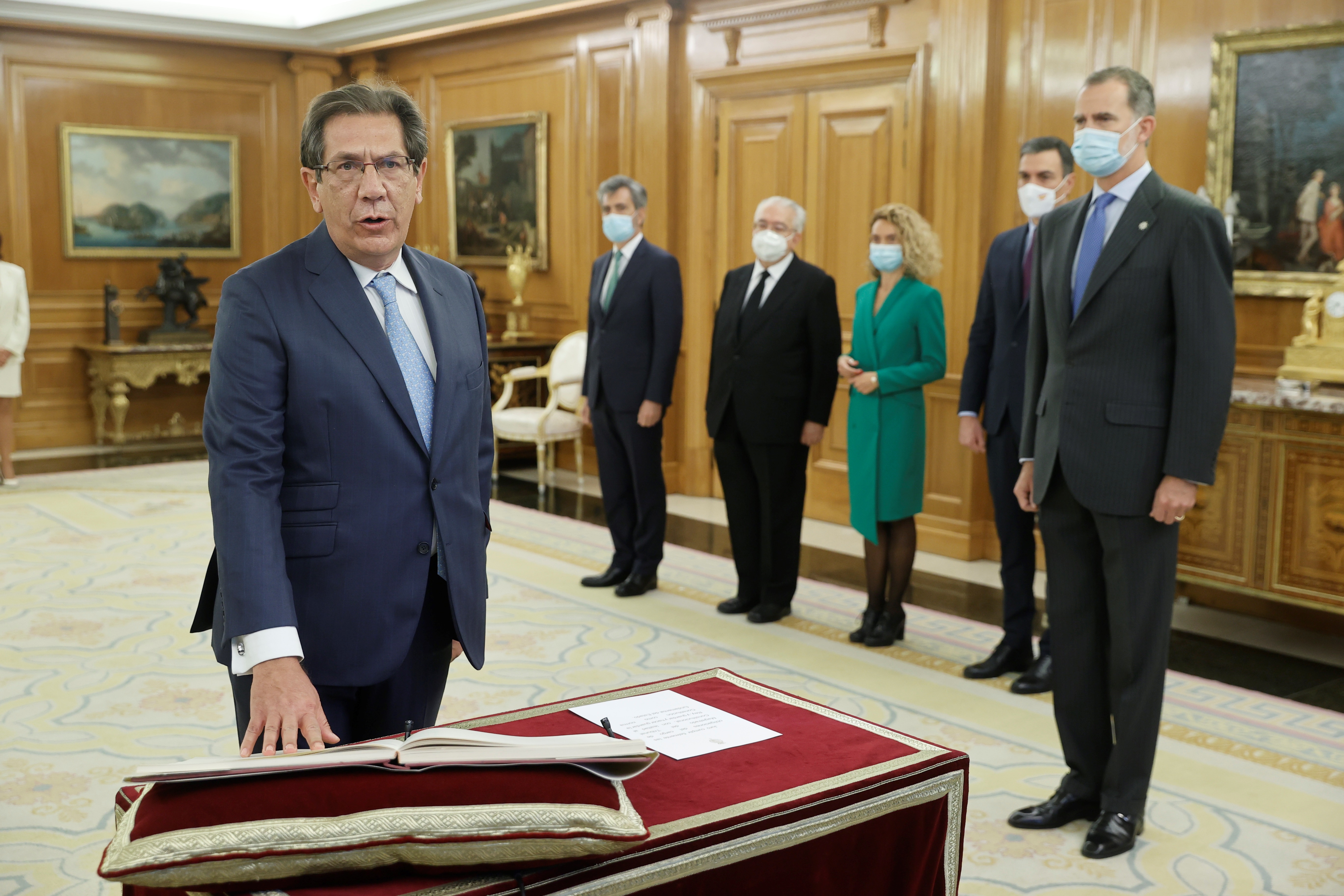 Justices Enrique Arnaldo, Concepción Espejel, Inmaculada Montalbán and Juan Ramón Sáez Valcárcel have promised this Thursday morning before Felipe VI in the Palacio de La Zarzuela their new positions as members of the Constitutional Court. The President of the Government, Pedro Sánchez; the president of the Congress of Deputies, Meritxell Batet; the president of the Supreme Court, Carlos Lesmes, and the president of the Constitutional Court, Juan José González Rivas, until now. Valcárcel has been the first of them and has chosen to use the formula of promising his position. Arnaldo, who has been sworn in, has followed him, as has Espejel. The latest has been Montalbán, who has leaned on the promise. At 12 noon, the four have come to take office at the headquarters of the high court, in Madrid. The ceremony took place after the State official newsletter (BOE) published his appointment on Thursday and also after the plenary session of the guarantee body met this week to verify that the four candidates met the requirements for their appointment. Each of the applicants received the support of nine of the current members of the plenary session. According to Constitutional sources, the four candidates also won – in a secret ballot – a vote contrary to their suitability for the position.

The court has indicated in a statement that it was confirmed that the four new jurists proposed for magistrates, appointed by Congress, met the requirements of the Constitution. The verification took place a few hours after the plenary session of Congress approved by a qualified majority of more than three-fifths the appointments of the four candidates. The vote was peppered with the controversy surrounding the name of one of the applicants, Enrique Arnaldo, for his work for the FAES foundation – the foundation headed by José María Aznar and which marks the hardest line of thought among the popular ones – and for appearing in the summaries of two causes of corruption linked to the PP: the one baptized as Palma Arena case – although the investigation against him was closed – and the Lezo case, the plot that has as its epicenter the former president of Madrid, Ignacio González.

Arnaldo, who was proposed for the Constitutional by the PP, appears in the summary of the Palma Arena case Due to the work of the company Estudios Jurídicas y Procesales, a law firm that was owned by the jurist, which invoiced works for administrations governed by the popular for 979,000 euros. These works are detailed in a report from the Treasury with which the Balearic judge José Castro tried to determine whether the former Balearic president Jaume Matas rigged a contract with the legal studies company.

The agreement between the PP, PSOE and Podemos to renew the four members of the Constitutional Council – and also other institutions, such as the Ombudsman and the Court of Accounts – has caused tensions in the parties of the left. The socialist deputy Odón Elorza broke the voting discipline of the formation and refused to give his support to Arnaldo “in defense of the prestige and dignity of the institutions, the TC and the Congress.” Two deputies from Podemos, Gloria Elizo and Meri Pita, also expressed their disagreement with the decision to accept the PP candidates – the other is Concepción Espejel, who in 2009 considered the abortion law approved by the Government of José Luis Rodríguez Zapatero unconstitutional and that she was recused from Gürtel case due to his closeness to the conservatives – although Elizo eventually respected group discipline and supported the appointments.

Both PSOE and Podemos have justified the agreement with the PP as the previous step to renew the General Council of the Judiciary, a body that has expired for more than three years. The intention of the coalition government is for this institution to have a progressive majority, the result of the 2019 general elections, and stop having a conservative majority that does not adjust to the result of the polls. The other argument of the parties that make up the Executive to defend their support for Arnaldo and Espejel is that it represents the first step for the complete renewal of the Constitutional, in June 2022, with a change of majority, from the conservative 7-5 now to a 7-5 progressive. However, if the PP continues to block the renewal of the Judiciary, which also elects two of the four members of the Constitutional Party to be renewed next June, the entire political cost of assuming Arnaldo will have been fruitless.

Also Read  Jane Fonda on the fight for the climate: 'The cure for despair is action' | Climate crisis