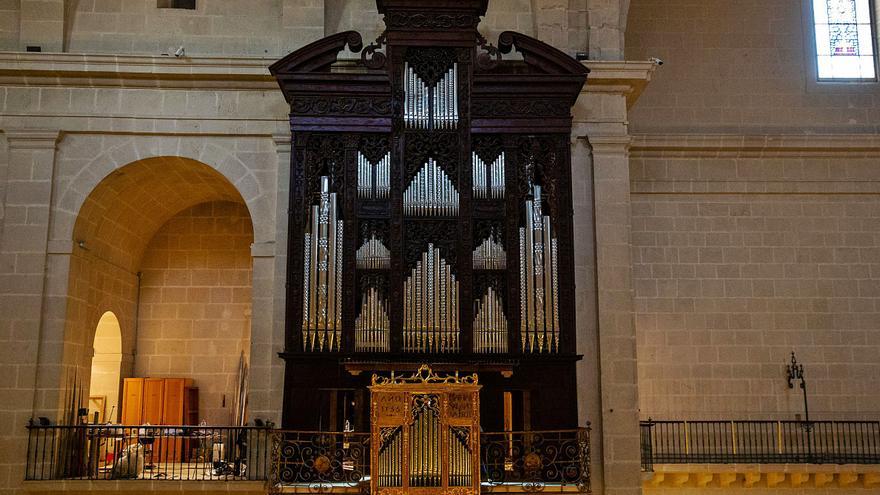 “It is a fantastic organ, wonderful, I have been playing and technically it is very pleasant, because of the keyboard, the pedals, everything is very orderly, the arrangement of the registers and the sound palette which is fantastic”, says this musician who has already recorded eight discs.

If last Thursday he took the stage of the Palau de la Música de Barcelona together with the jazz pianist Marco Mezquida, in a fascinating mix for him, yesterday he circled the choice of the program that he will perform on the 18th, it still needs to be defined. “I have not finished making up my mind yet, but the program will go, above all, around Baroque composers, such as Bach or Dietrich Buxtehude, but I would also like to make some foray into contemporary music because I think the organ admits it well.”

In his opinion, «the inauguration of an instrument is always a very special moment because it is the first time it has been heard and it involves the presentation in society of a work of many months of the organ builder, because it is not just a technical question, it is also artistic, and for an organist it is an honor ”, assures the musician who considers“ a success ”that Desmottes was chosen to build the instrument. «The organ builder is exceptional, top of the line; the level it has is beyond doubt, Desmottes is a guarantee of a quality instrument. The sound is as I had imagined it.

The organ, which consists of some 25,000 pieces with 2,900 pipes, began to take shape at the end of 2019 with the disassembly of the old instrument from which only the main box, made in 1580, which is the oldest in the Valencian Community, has been saved. and the cadereta, from 1755, made by Matías Salanova. “It is a super interesting instrument; from an artistic point of view it is large, with many registers and three keyboards, so it has many possibilities ». To this is added, he says, “the sound of the co-cathedral itself.”

Juan de la Rubia, who was fascinated as a child by sound and the complex organ machine, believes that for Alicante “the recovery of an instrument of these characteristics that is part of our heritage is very important” and “one of the most important of the Valencian Community ». In addition, he considers that “the important thing” is to make it “available to the musical community and society; it must be preserved and cared for, but it should not be a closed instrument.

For the musician, “everything is very exciting for those who have intervened in the process, but also for the people who have seen the instrument fade. Now he is going to get a very pleasant impression ».

The parish priest of the co-cathedral, Ramón Egío, defines the new stage that the temple will face from now on as a “very great illusion.” On the 18th, the parish priest will bless the instrument and the Juan de la Rubia concert will be held, although the official inauguration will take place later.

“It is like a dream come true”, something that occurs, thanks to the support of the Alicante Provincial Council, which at the end of 2018 promised to finance the cost of the new body. And last Friday, the plenary session of the provincial institution approved an item of 500,000 euros for this purpose.

“We have recovered a Renaissance jewel,” says Egío, “who recalled the former organist, José María Parreño,” who died without being able to see it.

“I am convinced that an absolutely new era is opening for the city in terms of organ music concerts of all times, which could not be performed before,” he highlights. “Finally Alicante is not going to be excluded from the organ cycles that take place in the province.” Without forgetting, he points out, that it will provide “a cultural dimension for tourism.”

De la Rubia, together with the organist of the cathedral, Luis Egío. | RAFA ARJONES