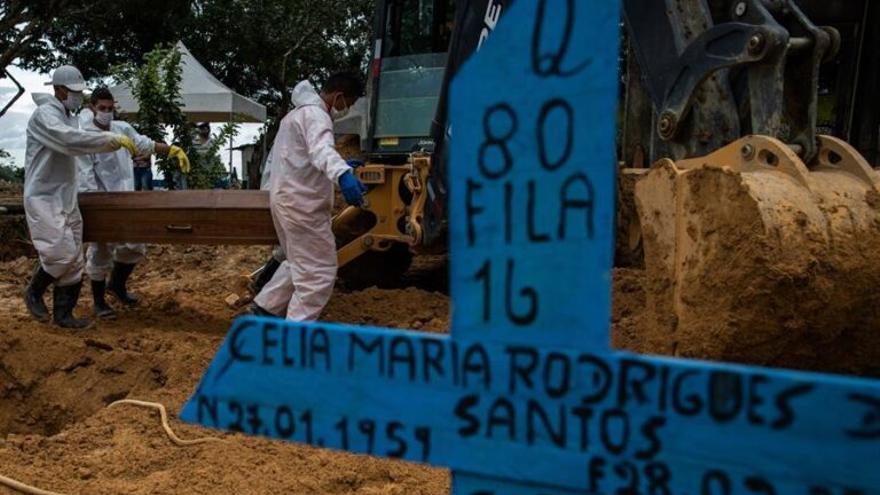 The The new coronavirus threat has a name: P.1. And a place of origin, Brazil. Specifically the city of Manaus, where it was discovered and where it has left an impressive trail of infection and death. To the point that researchers consider as probable, for the first time, the existence of cases of reinfection with fatal results.

This is what the latest study published 48 hours ago in the prestigious journal “The Lancet” says, in which Brazilian scientists come to the conclusion that the neutralizing capacity of antibodies is six times lower against this Brazilian variant, compared to other coronaviruses .

And they state that «the data indicate that the P.1 lineage can escape neutralizing antibodies generated in response to previously circulating SARS-CoV-2. ‘

In other words, this drop could mean that at least some people would be vulnerable to new P.1 infections.

These are data obtained in the laboratory and will not necessarily be fulfilled in real life. But they are really worrying.

This is P.1 the new threat of the coronavirus

First was the B.1.1.7 variant from Great Britain, famous for its contagion capacity and the speed at which it spread throughout the world. Then the South African strain arrived, casting doubts about its ability to dodge the antibodies and some of the vaccines. And now it’s P.1, a variant born in the city of Manaus, the capital of the Brazilian Amazon.

P.1 was discovered in Brazil at the end of last year, in the last days of December, but the research did not focus on it and its effects until some scientists have considered whether this strain can really have the ability to infect people who theoretically had immunity from having suffered the disease.

At the moment there are already three studies that, although they have not yet been published in scientific journals or peer-reviewed, are alarming, especially since they seem to weaken the protective effect of antibodies, and even that of a Chinese vaccine that they are now using in Brazil.

The situation is summarized by a Harvard epidemiologist, William Hanage, stating that “It is a variant to be taken seriously and the data shows that it is right to be concerned”.

Especially because, in addition, this variant has already been found in 24 countries and in several US states.

Manaus is a city of just over 2 million inhabitants located on the banks of the Negro River, in northwestern Brazil, and the capital of the extensive state of Amazonas. That was where, in the first days of the pandemic, a little less than a year ago, the coronavirus entered with enormous virulence.

In those days, coronavirus infections soared in the city and the dead were filled in cemeteries. The epidemic hit so hard in Manaus that a study carried out months later, with samples taken from a blood bank, determined that three out of every four inhabitants of the city had been infected by SARS-CoV-2.

Nothing less than 76% of the population. A fact that would be above the theoretical threshold of herd immunity, that is, it could be thought that the city had achieved the long-awaited group immunity.

And so they spent about seven months of relative tranquility, until in the first days of January the infections multiplied by six, and of the 552 infected that they had had between December 1 and 19, they went to 3,431 from 1 to 19 from January. An increase as unexpected as it is worrying, after seven months with a controlled rate of infections.

For this reason, scientists began to look to see if the British strain was to blame, which was already increasing infections in many parts of the world. But they did not find the B.1.1.7 strain or the South African strain in Manaus.

However, they found something that no one had seen before. A set of 21 unknown mutations.

And once the variant was located, they began to study why it was spreading so fast. It was about seeing if those mutations had made the coronavirus more contagious, or if he had just been lucky.

But whatever it was, the situation made no sense. Infections were skyrocketing in a city in which the vast majority had already passed the Covid-19.

There was no explanation. At least not with the known data. Because there are hardly any proven cases of reinfection in the world and because the antibodies produced by it are known to be effective for at least months.

Could it be possible that we are facing a mutation that is capable of defeating our antibodies?

And they began to study all the possibilities, tracking the P.1 variant from their first samples in December. And combining the data from genomes, antibodies and medical records in Manaus, they concluded that P.1 conquered the city not thanks to luck but to biology: its mutations helped it spread.

First because calculate that P.1 is between 1.4 and 2.2 times more transmissible than other variants of the coronavirus.

Second, and this is even more worrisome, because yes there seems to be reinfections.

This is the conclusion of an experiment whose results were published Monday in a preprint (article not yet peer reviewed) in The Lancet.

This study is signed among other authors by William M. de Souza, from the Virological Research Center of the Faculty of Medicine of the University of Sao Paulo, and Mariene R. Amorim, from the Emerging Viruses Laboratory, Department of Genetics, Microbiology and Immunology .

And in their research they have concluded that the neutralizing capacity of antibodies is six times lower against the P.1 lineage compared to other coronaviruses.

Furthermore, five months after the “CoronaVac” booster immunization, the COVID-19 vaccine developed by the Chinese pharmaceutical company Sinovac Biotech, the plasma of vaccinated individuals failed to effectively neutralize the virus of the lineage P.1.

So the report concludes with a more than worrying statement: “These data indicate that the P.1 lineage can escape the neutralizing antibodies generated in response to SARS-CoV-2 that were previously circulating.”

That is, this drop could mean that at least some people would be vulnerable to new P.1 infections.

To the extent that scientists believe there is “a growing evidence »suggesting that the majority of cases in the second wave in Manaus were the result of reinfections. And they claim that out of every 100 people who were infected in Manaus last year, between 25 and 61 of them could have been reinfected if they had been exposed to the new P.1 variant.

But scientists insist that these results obtained from cells in test tubes do not necessarily mean that the vaccines will be less effective to protect real people from the new Brazilian strain, P.1.

Vaccines can provide strong protection against P.1 even if the antibodies they generate are not as potent. And even if the variant manages to infect vaccinated people, they will most likely remain protected from a severe attack by Covid-19.

Also, in the real world, Outside the laboratory, there are at least two possible explanations, not mutually exclusive, for this second wave of Manaus and its tragic consequences.

They are explanations developed in an article published in The Lancet and led by Ester C. Sabino

The first considers that it would be possible that the rate of SARS-CoV-2 infections in the first wave could have been overestimated, so that the population actually remained below the threshold of group immunity until the beginning of December 2020. And in this scenario, the resurgence could be explained by a greater mix of infected and susceptible individuals at a time when measures were quite relaxed.

The second It would be that there is a possibility that immunity against infections had started to decline in December 2020 (six months after the first wave), due to a general decrease in immune protection against SARS-CoV-2 and antibodies. But the study itself finds that waning immunity alone is unlikely to explain the increase in cases in manaus.

And so we are, awaiting further investigations and knowing that, today, the only possible measures remain the same. Maintain protective measures and vaccinations.