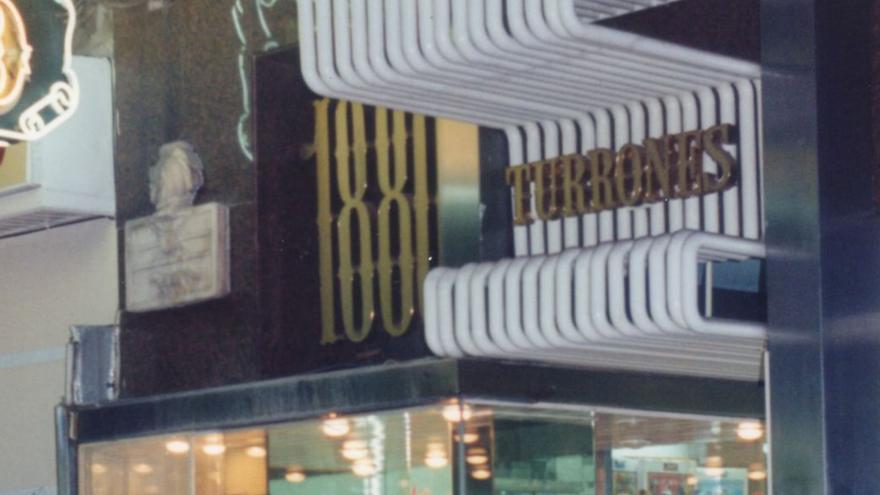 Taking advantage of the fact that during this Bridge of the Constitution Jijona celebrates, after last year’s break, its Christmas Fair, we are going to review today 140 years of the commercial history of Calle Mayor, a historic artery in the center of Alicante. And we will do it through the Jijona nougat shops that have long been installed on this street.

In 1878 we already found references to a nougat shop run by jijonencos in the central Alicante street. Specifically, the shop of Juan Sirvent’s Widow, which offered its products at number 34 Calle Mayor.

At the beginning of the 20th century we find the news of the inauguration of a horchatería in this central street run by Manuel Sirvent. Perhaps it is the same Sirvent nicknamed “Uncle Quico’s Nephew” who in 1926 ran the Kiosko Monumental del Portal de Elche, where the famous nougats of the Teclo brand were already sold at that time.

In 1928 the nougat shop of the Hijos de Manuel Sirvent Miralles was already advertised in the Alicante press as an “old and renowned establishment” located at number 23 (sometimes 25) Calle Mayor. And it was not surprising, since the store was opened to the public in 1909. It sold its nougats under the Teclo brand. Its origins date back to the year 1824 when Juan Sirvent obtained from King Fernando VIII the title of Master Confectioner. At the beginning of the 1990s, the company had two stores, one on Calle Mayor and the other in Maisonnave. Economic problems led to disaster for the historic company that ended the 20th century, plunged into a judicial labyrinth, seized and in the hands of third parties. With layoffs of workers, production stoppages and litigation with the Aznar Sirvent family for the use of the Teclo brand, including the controversial seizure by the Civil Guard of almost 2,500 tablets in the Alicante store due to problems with the protected name, the company jijonenca closed its doors definitively in 2006. After several changes of location in recent years, Teclo today sells its products on Poeta Vila y Blanco street.

On October 10, 1932, another Sirvent, in this case Juan Sirvent García, opened his nougat shop at then 17 Calle Mayor. After spending several years in the management of Teclo nougat, Sirvent decided to open his own business by setting up, according to the press at the time, a store in which “there is no room for greater elegance, clarity and good taste and it can be said, without hyperbole, that this establishment is the best in Alicante in all respects ». In addition, the construction of a modern factory in Altozano was announced, which was installed at 28 avenue de Novelda.

Almost half a century later we find the 1880 brand nougat shop at 9 Calle Mayor. In December 1976 the new nougat was advertised on the Information pages as “What you expected. A high-class establishment for the best nougat in the world ”, describing its nougat as a“ craftsman’s pride ”. The company, which at that time was called Juan Antonio Sirvent Selfa SA, has its roots in the 18th century. In 1924 they created the El Lobo brand and after the Civil War, the prestigious 1880 emerged, representing the year in which the family recipe was written for the first time. When in 1939 they decided to launch the new nougat and calculated its cost, that famous phrase arose: “this is going to be the most expensive nougat in the world.” After the closing of the Turrones Teclo store, today it is the only historical nougat that remains open on Calle Mayor. As a curiosity we will say that his store in Madrid, recently opened, has the same address.

Crossing the narrow passage of San Francisco Javier, we access Rafael Altamira street. On the corner of this street with what is now called María Josefa Ágreda y Muñoz we find the Turrones Carbonell store, owners of the El Barco brand. It is run by the Successors of José Carbonell Miralles whose roots go back to the year 1840. About 1914 José Carbonell Miralles opened his business in the then Calle Princesa number 15. Years later they moved to the opposite sidewalk and expanded the business. The terrible explosion of the Llopis “El Gato” Armory in 1943 swept away this trade. Forced by the situation, they moved their business to La Rambla and Castaños, returning in 1953 to Calle Rafael Altamira, 26, precisely ground zero of that catastrophe that occurred ten years before, where they continue to this day.

I am aware that I leave out other current and past historical nougat shops located in other central streets of the city. We will return with the center of Alicante and its nougats in future deliveries.