Summer has arrived and with it, the unbearable temperatures of the year. What if a week at 38º, what if a few days at 42º… after a few days of suffering, our body says enough and that’s when the debate comes in: air conditioning or ceiling fan?

Heat waves are so common in our country that we should simply start calling them summer. In summer it is hot, a lot or a little depending on where we live. And there are many ways to combat it.

The traditional one is to go to the beach and take a swim every time the sun shines. If you stay in the city, yours is to have a friend with a pool. But, if you are one of those who has a full wallet, the question is between the ceiling fan, a classic, or the air conditioning, a waste?

For this eternal debate, the Organization of Consumers and Users wanted to explain a little more advantages and disadvantages of both refrigeration models. Although we have already told you the difference, it is, first of all, a question of money.

The ceiling fan is very efficient at moving air around the rooms. Its large blades mean that with a low speed of rotation it can move large amounts of air. This, if the room is not too hot, is enough to feel comfortable at home. What is clear is that it does not cool the air, it only moves it.

As for the air conditioning, what it does is take air from outside, cool it as much as we want (usually no lower than 16º, the ideal temperature being 24º) and put it inside the house. It does this through a motor that is placed outside our house. 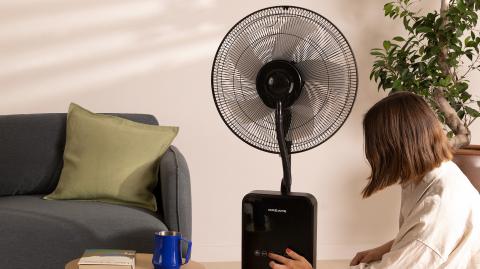 The OCU made realistic calculations, of the normal use of both devices in a normal house, where some 200 hours of use per month were estimated in the case of air conditioning, and around 340 for a fan.

As obviously a fan does not consume the same as an air conditioner, and there is not even parity between the same devices, the OCU, in order to be able to compare, focused in appliances for rooms of about 20 m2, ceiling fan with a diameter of 132 cm, and Split-type air conditioning equipment with 2.5 kW of thermal power.

In that situation, the efficient ceiling fan would consume about 8.5 kWh per month, which is 2.55 euros; while the air conditioning would reach 83 kWh, which translated is 25 euros per month.

Namely, the ceiling fan consumes 10 times less than an air conditionerenough difference so that, in case of a tight budget, the ceiling fan is the one who wins the battle for cooling our house.