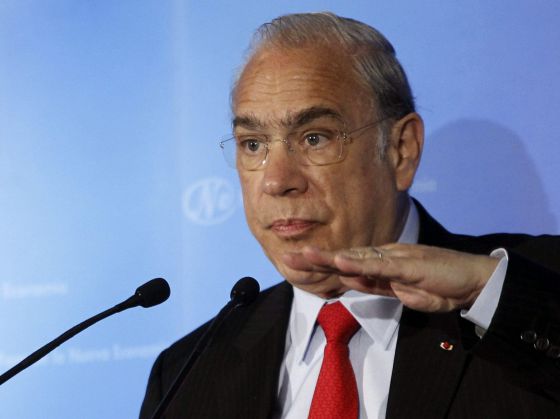 Six months ago, things could only go bad or worse because of the pandemic. Today the world is still mired in the greatest crisis since the end of World War II due to the coronavirus, but the outlook is somewhat less bleak, according to the Organization for Economic Cooperation and Development (OECD). The promise of a prompt vaccine and the effectiveness of the crisis containment policies of many governments, especially in terms of preserving companies and jobs, suggest that the global economy may, by the end of 2021, return at least to where I was in that pre-pandemic 2019. But it is a fragile hope and, above all, uneven, according to the agency warns in its new economic outlook report, presented this Tuesday at its headquarters in Paris.

“The assumption that new outbreaks of the virus will be contained and the prospect of a widely accessible vaccine by the end of 2021 underpins the confidence that a gradual but uneven recovery should be achieved in the next two years,” notes the OECD. “The vaccine has somewhat dispelled the fog of uncertainty, although we are not out of danger yet,” declared the secretary general of the organization, Ángel Gurría, when reeling off the report.

According to its forecasts, the world economy will end this 2020 with a negative growth of 4.2% that next year will turn into a robust 4.2%, this time positive. The trend was already in sight in September, but the contrast with the perspectives of the last global report, that of June, is abysmal. So, even after the first countries of the first wave of coronavirus had just emerged, the OECD warned of a global recession this year of at least -6% and up to -7.6% in the worst possible scenario, that of a second wave. This has happened, but the grim expectations have not been met and the OECD now even dares to put the word “hope” in the title of its new report: Coronavirus: turning hope into reality.

“The worst has been avoided, most of the economic fabric has been preserved and could quickly revive,” celebrates the chief economist of the organization, Laurence Boone. But it is not yet time to claim victory. “The situation continues to be precarious for many vulnerable people, companies and countries,” he warns. The figures corroborate that sober warning at a time when everything, especially trust, remains very “fragile.” And the losses have been massive. Compared to forecasts a year ago, “we have lost the equivalent of the combined GDP of Germany and France,” Boone staged during the presentation.

According to the latest estimates, the euro area will grow by -7.5% this year, a minimum variation of the -7.9% estimated in September but significantly better than in June, when it was forecasting a drop of -11.5%. In 2021, the euro countries as a whole will grow by 3.6%, a figure that will rise to around 3.3% in 2022. All major European engines will suffer sharp falls this year —Germany -5.5% ; France and Italy -9.1% -, but they should return to the path of forceful recovery in 2021, especially France, for which a recovery of up to 6% is expected. It shows, however, of those inequalities that the OECD warns about – and that they are not only hemispheric or between developed and poor countries – is that Spain will suffer a fall of -11.6% this year, only comparable in the European zone with -11.2% British. Both countries, however, should also return to the path of positive growth in 2021.

The advantageous student is once again China, which with 1.8% is the only major economy that will not end this year negatively and that in 2021 will achieve an astonishing 8% growth, thus achieving, in the two years that a priori it will have dominated the pandemic, almost 10% growth that will put it well ahead of other countries that just aspire to return to 2019 levels. In fact, the OECD believes that many of the countries will continue in 2022 to register growth 5% less than before the crisis.

For its part, the United States, which in 2021 will experience a political change with the arrival of Democrat Joe Biden that could profoundly affect the world economy – without explicitly mentioning it, the OECD during the years of Donald Trump insistently warned of the damage that They made their protectionist measures and trade tensions, strategies that the president-elect is expected to reverse – will end this 2020 with a growth of -3.7% although it should recover to 3.2% in 2021.

But that the economy begins to heal wounds does not mean that they will not leave scars. And if you don’t act carefully, they can stay forever. “Effective and well-financed health policies (which implies not only reaction to pandemics, but also ensuring preventive and affordable health for all) and flexible macroeconomic and structural support measures are essential to contain the virus and minimize the potential cost to long term of the pandemic in living standards ”, emphasizes the OECD. Above all, it is crucial not to withdraw aid instruments established by governments too soon, “as was done after the global financial crisis” of 2012.

Thus, the OECD advises, it is necessary to “continue accommodative monetary policy” and fiscal measures “while containment measures (of the virus) limit economic activity”, so that sectors, companies and related jobs can be “kept alive” . But at the same time, governments must make a careful analysis so that the enormous debts incurred do not result in failed policies. In this sense, Boone establishes three priorities in public spending: investing in education – young people being the key to the future, but also those most affected by the crisis – in health and in physical and digital infrastructure; undertake “decisive action” to reverse a lasting increase in poverty rates and income inequality and, finally, promote international cooperation. Because “protectionism and border closures are not the answer” to the first complete global crisis since World War II, stresses the chief economist. And a clear objective must be set, he concludes: “the world must prevent the health and economic crisis from becoming a financial crisis as well.”