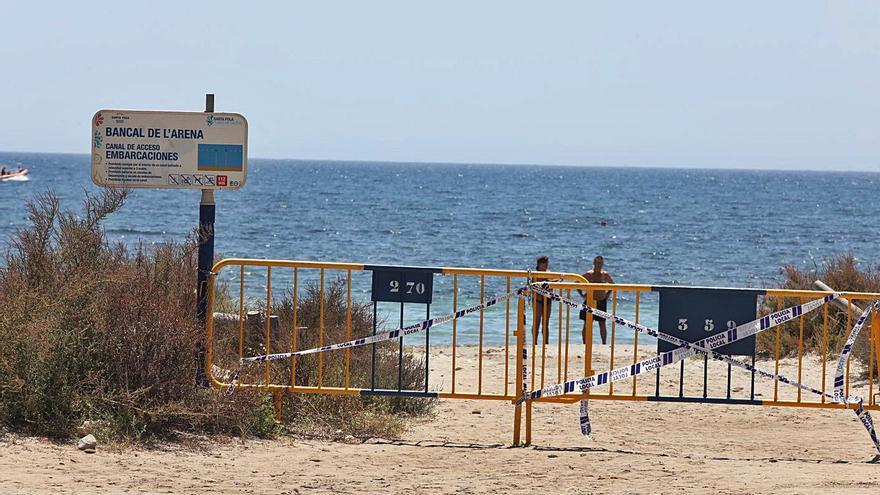 The public access channel to motor boats from the coves of Santa Pola It has been sealed for more than two weeks since part of the beacon was detached after the last storm. This is the only free entry and exit channel for boats that the fishing village has, so the closure of this ramp has generated great discomfort among owners of pleasure boats who used to stop at the cove of Bancal de l’Arena to start a journey to Tabarca and other points.

There are users who fear that this access will be closed permanently as has already happened in other parts of the fishing village, although the truth is that the municipal claim is to reopen it this week. According to Jorge Díez, mayor of Playas, the entrance has had to be sealed because the red and green buoys that Costas regulates have been lost for the channel to work, so he hopes that they can be replaced this week without fail, after the City Council announced in late June of the problem.

Disgust has reached such a level that there are numerous users who have formed groups for messaging applications to propose solutions or alternatives in other municipalities that do have this free public service, although the options are scarce. Francisco Carretero He is passionate about the sea. He lives in Albacete but spends the summer in Santa Pola, where he has a family.

He tells this newspaper that this temporary closure «supposes a huge expense for users and a danger too, since those of us who cannot afford to take the boats through the port do so in Urbanova, It is a ramp that is fatal, with poorly placed concrete blocks so that with bad seas you could have a severe accident, “he explains.

Also Read  Delays in culture accumulate due to the pandemic

The ramp of the fishing village is one of the most sought after in the south of the province, and in high season there are even queues to access it because «it is well located if you want to go to the port, to fish, in case you want to go to Tabarca, We do not bother bathers, there is no longer the amount of people that Playa Lisa could have, for example, ”explains this user. At the same time, he calls for better regulation in the area so that there is more security “because it is a nautical channel” and bathers can be seen near the ramp.

Keyvan Leader, Another individual who uses this ramp reproaches that the administration is taking so long to replace the beacons, especially in the middle of the summer season when this access is in high demand. Understand that this blockade will encourage many users to move to other more risky enclaves. “Only that of Agua Amarga is available and it is very dangerous because of the rocks that exist, so the most accessible is the one under the Lighthouse and as it is a public service it should be enabled,” he says.

Users reproach that the cost to access a private ramp in the town is high and if the boats left other municipalities such as Guardamar or El Campello «it would travel four times the distance that we would sail from under the Cape to reach areas like Tabarca », reproaches another assiduous to this recreational activity.

Also Read  Timnit Gebru: Why the firing of a black Google researcher has become a global scandal | Technology

The City Council pledged in February to study the implementation of a new boat ramp in the urban core as well as to adapt the existing ramp, after the local executive (PP) approved Vox’s motion on this matter. The training asked a few days ago on social networks to comply with the motion approved after public criticism.