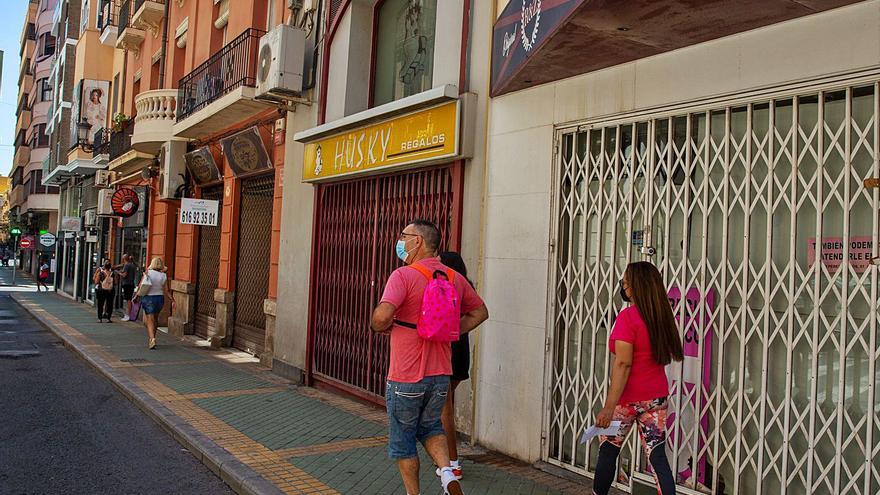 Companies have suffered with particular virulence from the crisis generated by the coronavirus. The latest report on firms registered in the Social Security of the Statistical Portal of the Generalitat, which counts those companies with a contribution code, that is, those that have at least one salaried worker registered, indicates that Alicante closed last year with 57,262 active companies, which means that 2,296 were left on the road, 3.9% of the total. The vast majority, small businesses that could not withstand the onslaught of the pandemic. Construction managed to maintain more or less, with 6,158 companies, only 24 less. Industry lost 277 firms, to 5,787, while 2,052 disappeared in services, reaching 43,339. To all this must be added the 7,000 businesses that have had to draw the blind to date of the 26,000 existing, according to the data managed by the sector’s employers’ association.

Based on the approximate estimates provided by the various sectors, the losses generated by the pandemic are above the 16,000 million euros, Being the tourism sector the one that has suffered the most, with 9 billion, followed by the trade, with 4,000, and industrial sectors, with the footwear to the head.

All of this has had direct consequences on GDP, with an annual cut of 13.5%. According to this estimate, Alicante has reduced its annual wealth creation by about 5,100 million euros, representing 2.96% of the national GDP, which in turn represents a setback to the 2015 data. In this way Furthermore, the province descends one notch in the national ranking in favor of Vizcaya, being relegated to sixth position.

The president of the Alicante Chamber of Commerce, Juan Bautista Riera, highlights the inequality in the condition. “Tourism – he regrets – has had a very bad time, and this summer the presence of foreigners has been reduced. Trade has also suffered, although the current behavior is not bad at all. The industry, however, has held up quite well. The future, he adds, is presented “surrounded by uncertainties, although with the advance of vaccination, the situation begins to normalize.”

For his part, the president of the Valencian Business Confederation (CEV), Salvador Navarro, points out that “there are sectors that have suffered more, although within them, there are also companies that have been able to weather the storm better or worse. The impact, of course, has been hard, and we all hoped that this summer tourism could regain normalcy, which at the moment is not being entirely possible. But when we are able to advance herd immunity, I am convinced that the recovery will be powerful. However, and for this to be possible, it is also necessary to remedy issues that are acting as a drag, such as the rising cost of raw materials, electricity or transport.

One of those that has suffered the most from the pandemic due to mobility restrictions and the forced closure of establishments has been tourism, with losses of 9,000 million euros of which 600 belong to hoteliers and the rest to hospitality and related businesses directly with this activity, such as travel agencies, buses, car rentals or certain businesses. From the Hotel Business Association of Benidorm, Costa Blanca and the Valencian Community (Hosbec) it is recalled that until May 9, 70% of the hotel plant had to remain closed, and that billing has fallen by around 80%. The sector sees a complicated outlook ahead. The summer campaign is operating based on the national market and hopes are pinned on recovering foreign tourism in winter.

Commerce is another of the major victims, with 7,000 establishments closed in the province, according to estimates by the Alicante Federation of Commerce (Facpyme). The entity calculates that, apart from closings, sales have fallen between 20% and 50%, depending on the type of articles in which they are specialized. The sector faces another problem, such as the rise in electricity rates, and regrets that, while some municipalities have turned to helping them through consumer bonds, others have not.

Footwear is the industrial sector that has been most affected by the decrease in turnover, close to 400 million, due to the fall in fashion consumption. Issues such as the threat of tariffs by the United States have not contributed to improving the health of companies either. The national employer Fice trusts the gradual return to normality, in parallel with the advance of vaccines and the recovery of social life, although it is estimated that it will not arrive until 2022.

The Federation of Metal Entrepreneurs of the Province of Alicante (Fempa) calculates the drop in billing by 30%. Aspects such as the increase in electricity prices, taking into account that it is a large energy consumer, are complicating the recovery. Also the high cost of raw materials and freight for maritime transport.

The Association of Textile Entrepreneurs of the Valencian Community speaks of a drop in turnover of 14%, a percentage that has not been greater thanks to the good functioning of the home sector, as well as the ability of companies to manufacture masks and equipment of sanitary protection.

The decrease in toy sales, according to the national employers’ association, has been 7%, although there are subsectors, such as costumes, that have had a worse time. There is also concern in the sector about high freight prices and delays in supplies, which could put the next season at risk due to its great seasonality.

The fall in sales in the marble sector has oscillated between 30% and 50%, due, as explained by the Marmol de Alicante association, to the fact that it is not an essential sector. What is worrying at the moment is the increase in raw materials and even the shortage of some of them, such as resin, which is making it difficult for some orders to be shipped.

The Provincial Association of Real Estate Developers of the Province of Alicante (Provia) affirms that the impact has not been so pronounced in this sector, beyond postponing the formalization of sales due to mobility problems. The national clientele has gained greater weight.

Agriculture is the only sector that manages to grow

The agriculture is the only sector that has managed to grow during the pandemic coronavirus, as evidenced by data related to the number of companies. While the rest of the sectors of the province registered closures, in the case of this activity it has gone from 1,921 active firms at the beginning of 2020 to a total of 1,976.

It should be noted, in this sense, that food was considered at the beginning of the health crisis as a essential sector, and that the supermarkets, both national and international, registered strong increases in sales during the confinement.