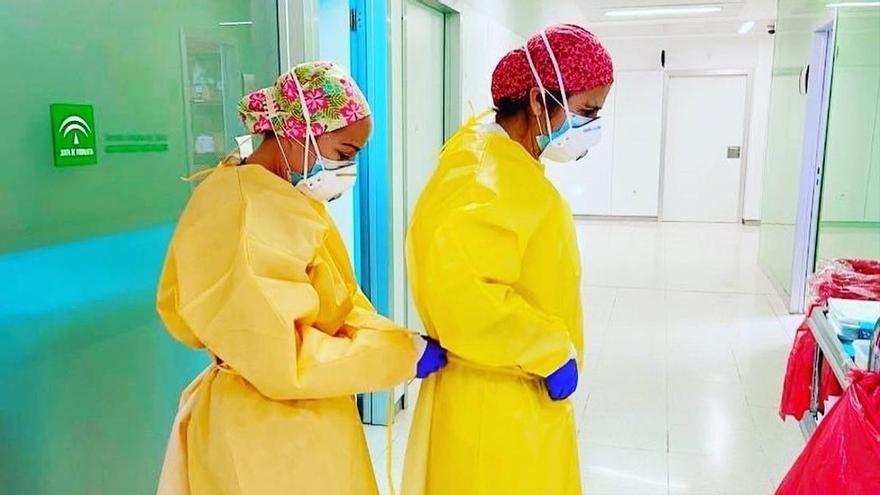 Uncertainty, fear of contagion, protocols that change, ethical dilemmas, deaths, physical and mental exhaustion … are some of the causes that have affected the mental health of doctors during the coronavirus pandemic. In two years, the Comprehensive Care Program for Sick Physicians (PAIME), which was created in 1998 to offer specific care to professionals with mental disorders and / or addictive behaviors, has served 1,201 new cases, almost 37% more than in the two previous years. 60% of the patients who have attended the program are women. Cases of addiction account for 13.5%: 66% for alcohol abusel and 34% for other toxins.

This is stated in the report of the Foundation for the Social Protection of the Collegiate Medical Organization (FPSOMC) which is released this Thursday and to which EL PERIÓDICO DE ESPAÑA has had access, newspaper belonging to the same communication group as this medium. They clearly draw the bill that the pandemic has passed to Spanish health workers in terms of mental health. At least those who have been cared for through PAIME, a veteran program – born in 1998 – that was created to offer specific care to doctors with mental disorders and / or addictive behaviors. With nuances, explains to this newspaper, the doctor Gustavo Tolchinsky, secretary of the Barcelona College of Physicians (CoMB), because, being a national program, the PAIME is “very heterogeneous” since, in reality, it represents the microcosm of the 52 Schools from Doctors of Spain, “with its peculiarities and a very disaggregated reality“. The report is prepared with all the data provided by school officials from the different communities. Dr. Tolchinsky is one of the thirty experts who, on November 4 and 5, will meet in Cádiz to address the main challenges in mental health of the medical profession, within the framework of the IX National Congress of PAIME and III Latin American Meeting of the same program.

Days before, the FPSOMC has revealed some statistics that will be put on the table and on which the doctors will debate. For example, with those registered for 2019 and 2020, it has been found that this program attended almost 37% more cases (a total of 1,201) than in 2017-2018, when the average was around the 400 professionals per year. Since 2011, the first year in which the FPSOMC records the evolution of registered cases, almost 6,400 physicians have gone through this specialized program.

Doctors, out of fear, guilt or social stigmatization of the disease itself, tend to hide it

In the last reporting period, the metal disorder it has been the main reason for admission to the PAIME with an increase of more than two points (76.8%) while addictive pathology represents 13.5%. Of this percentage, 66% are cases of alcohol abuse and 34%, for other toxins. Cases due to dual pathology decreased to 9.7%, according to the study.

Like other groups, doctors too, out of fear, guilt or social stigmatization of the disease itself, tend to hide and deny it. They are not easy patients, admits Dr. Gustavo Tolchinsky from Barcelona. “It is hard for them to admit it. That a doctor has a disease does not mean that he is incompetent, what he cannot be is irresponsible. “In addition, he draws attention to a fact: this type of program actively followed doctors with mental disorders or addictions before the The “brutal” impact of the pandemic was unforeseen.

The report by the WTO Foundation for Social Protection reveals an increase in members who have spontaneously attended the program: 63% in 2020. The largest number of cases is related to adaptive disorders. Of the 1,201 new admissions, a total of 233, that is, 19.4%, have required hospital admission in the Galatea Clinic of Barcelona, ​​dependent on the Foundation of the same name, which is the hospital resource available to the doctors who need psychiatric care.

Of the total number of doctors attended, the vast majority 63% were working when they entered the program

Of all these cases, 20.3% have been considered complex and, of these, 60% represent risks to praxis. Of the total of doctors attended, the vast majority, 63% were working at the beginning of the program, 34% had sick leave; 2% were unemployed and 1% had temporary professional disqualification. In terms of job performance, 86% work in the public health system, 9% in private practice and 5% in both.

As soon as to sex, the percentage of doctors affected by mental health problems and / or addictions (60%) is still higher than that of doctors (40%) and continues its upward trend in recent years, says the report. By age group, the data show a worrying reality: a rebound in the number of physicians treated who are less than 30 years old.

Psychiatry and anesthesiology specialties are presented as the most vulnerable

The specialties with the highest number of cases attended by PAIME are Family and Community Medicine and Emergency, followed by anesthetists (6%), pediatricians (6%) and psychiatrists (4%). However, if it refers to the susceptible population, the study indicates, they are Anesthesiology and Psychiatry, the specialties with the greatest vulnerability.

PAIME is a pioneering program in Europe with a long history: almost 24 years since its launch. It is coordinated through the different professional associations and has procedures (direct access, confidentiality, the use of therapeutic contracts for the follow-up of complex cases, etc. ..) and of a care unit, through the Galatea Foundation.

Psychologists and psychiatrists warned him from the outbreak of the crisis. The harshness of fighting face to face with covid-19, with overflowing health centers, professionals at the limit and trying to save lives in a collapsed country, would leave consequences. Anxiety, impotence, anguish, sleep disorders, pain… were some of the most common reactions among health workers.

For this reason, the secretary of the College of Physicians of Barcelona distinguishes, if the impact of the pandemic is discussed, between health workers with serious mental health problems – who have required psychiatric care – or those who have needed to go through programs such as the Emotional Support Service for Health Professionals (SEPS), also from the Galatea Foundation, with milder pathologies.

In these months there have been numerous studies published on the effects on the mental health of those who faced the disease on the front line. The Collegiate Medical Organization (WTO) already published the study in February 2021 “Repercussions of covid-19 on health and the exercise of the profession of doctors in Spain “. A work carried out by researchers from the WTO, the Galatea Foundation and Mutual Médica. The research -now we are working on a new wave of data– It produced devastating figures: 51% felt overwhelmed by the pandemic. And 34% had thought about leaving the profession at some point.

In the worst of the crisis, the Mental Health units of the large hospitals urgently deployed their professionals to the centers themselves to attend to their colleagues, especially those who worked in the most sensitive areas such as Emergencies, ICU or the covid patient isolation plants. The situation was so dramatic that it was attended to at the foot of the track. Wait a minute, in a hallway. Emergency therapy so that they would return to work tirelessly.

Those were those days when most communities also opened psychological care lines for health workers, their families and, of course, for patients. Specific programs and circuits that, as the incidence of the virus has decreased, have been dismantled, explains EL PERIÓDICO DE ESPAÑA, Javier Prado April, clinical psychologist in Zaragoza and member of Anpir (National Association of Clinical and Resident Psychologists).

During this time, what clinical psychologists have been observing, Prado Abril explains, is that, during the pandemic and also now, those who have resorted to therapy the most have been women, many of them nurses. “There may be a gender profile, and women are more predisposed to ask for help “, he specifies. Most of the consultations, he details, have been for depression, anxiety, exhaustion, burning, insomnia and, also, some case of serious mental disorder.

“I cry every time I remember what I lived, what I felt and what I lost. A smell, a person or a word triggers a cascade of emotions that I cannot control, we are still injured and there is no band-aid that heals for now ”. These are words, in the form of a tweet, written just a few days ago by nurse Ana Antón on the social network. Very illustrative of what the toilets still feel.

No, you are not the only one. I cry every time I remember what I lived, what I felt and what I lost. A smell, a person or a word triggers a cascade of emotions that I cannot control, we are still injured and there is no band-aid that heals for now. A hug 🤗

The Nursing Union, SATSE, has denounced that the different public administrations have left “to their fate” the health professionals who have been seriously affected at a psychological level by their assistance and care work during the pandemic. They criticize that specialized support offices have not been set up in the hospitals themselves, Primary Care areas or in social and health centers.