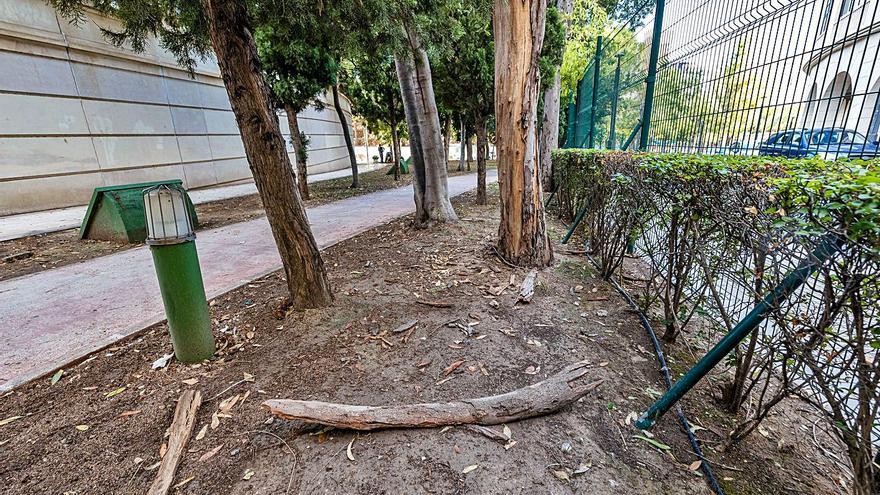 The park of the Sink of Benidorm is one of the green lungs that has the city located in the heart of the city. A natural space mixed with a unique architectural design that in recent times has lost some “oxygen”. And it is that in some parts it is “in pieces” and the destruction o la lack of trees or grass they follow one another along its central aisle.

In the greenest areas, pines and trees shade this space. But the grass is missing or in bad shape. Some slopes are damaged or even vandalism has made its appearance, leaving graffiti on them and in other areas. There are also remains of trees on the ground, old posters in the entrances or a damaged bathroom. And there are small flaws in fountains or large flowerpots.

The Parque de l’Aigüera was a project of the architect Ricardo Bofil who designed a green space in the heart of Benidorm on the ravine of the same name in the 80s. It was created as a large public space with architectural elements reminiscent of the neoclassical style with large “vessels” as flowerpots or capitals of that style. It has two auditoriums, the smallest Óscar Esplà; and another with capacity for 6,000 people with the name of Julio Iglesias. The first of them was remodeled and damages were repaired and they were provided with accessibility. The second has a large auditorium where all kinds of events are held. In the stands, the grass is the protagonist. A green item that “dies” due to use. Since 2019, the City Council has been repairing the pavement of the entire park, characteristic white and red tiles that have been changed at the hands of several employment workshops. The last one is still underway and the works can be seen in the central corridor that connects both auditoriums.

Some green areas have lost their vegetation or have pieces of broken trees. | DAVID REVENGA

The state in which the park of l’Aigüera is located has made Ciudadanos (Cs) request that action be taken as soon as possible. To do this, they ask the PP government to incorporate into the 2022 budget an item to completely renovate this green area, especially the grass or trees. But they also ask for a comprehensive rehabilitation project for the auditoriums, renew the signage at the entrances to the park, urgently repair the breakdowns in the toilets and remove rusty elements. They remember that they are working on the pavement, but “at such a slow pace that by the time the whole is fixed, cracks will have started to appear in the initial areas.” All this will be presented in a motion in plenary next Monday. In addition, after the complaints of the neighbors, they have also raised the need to act on the light of the largest amphitheater that remains on all night. The training indicates that “improvement and repair actions are non-existent” and that in 2017, the Corporation and approved to act on this space, without success.

For its part, the local government ensures that it does act on a regular basis. The councilor for Public Space, José Ramón González de Zárate, indicated that, for example, “graffiti is cleaned as soon as it is seen.” Preserving this “green lung” with 30 years of existence, its characteristics and the large number of public goes through almost a daily job. “The lighting will be changed with the subsidy that we have requested and with the Edusi project, action will be taken on the upper part of the park, where the bullring is,” he added.

As for gardening, “the ‘bald spots’ occur in areas where the trees themselves do not allow the grass to grow” and he explained that, normally at the beginning of the year, the grass is replanted, when the events end. “We don’t stop,” he added. The next intervention is planned in the toilets of the Julio Iglesias Auditorium.

One of the green space bathrooms that is broken these days. | DAVID REVENGA