The accounts with the vaccines keep coming out. Despite the potholes, the stoppage of AstraZeneca, the delays and the slowness of the European Union when compared to countries such as the United States, Israel or the United Kingdom, if the forecasts made by the Commission are met, the doses they would be enough to vaccinate 70% of Europeans in early summer. Spain has committed to reaching that percentage before September 21, when this season ends, but if there are no problems with the agreed supplies and the doses are administered in a timely manner, this could happen as early as June.

Thierry Breton, responsible for the collective purchases of the EU vaccine, reiterated on Sunday on French television TF1 that the forecast is still to deliver to the 27 between 300 and 350 million doses in the second quarter. Being conservative, Spain would have 30 million of these doses. Added to those that are in reserve (1.3 million), those that have to arrive this week (almost one million) represent 32.3 million. Taking into account the people who have already been vaccinated, they would be sufficient for full immunization (with a double schedule in the vaccines that require it) to 58% of the population between the end of June and the beginning of July. But the vaccination rate does not follow this logic: now there is no aspiration to close the cycle, and many people will be waiting for the second dose, so it is likely that more than 70% of the population could be reached with, at least, a prick.

The key to reaching the figure is that the EU expects vaccine manufacturing to multiply as the months go by. The problems that have existed so far, if these plans are fulfilled, would be more than alleviated. Even AstraZeneca’s defaults and the drugmaker’s trade war with Europe would be just a small stumbling block that would not prevent reaching the figure, as long as no new problems arise with other manufacturers. The funnel could be more in the capacity of the States to administer the doses than in their availability.

Although it is not known exactly how many doses of each pharmaceutical will arrive, the Minister of Health, Carolina Darias, revealed on Sunday in La Sexta that Spain will receive 5.5 million Janssen in the second quarter, requiring a single dose. This allows for calculations that until now were impossible, since depending on the number of this single-shot vaccine, the speed to reach the objectives varies substantially. 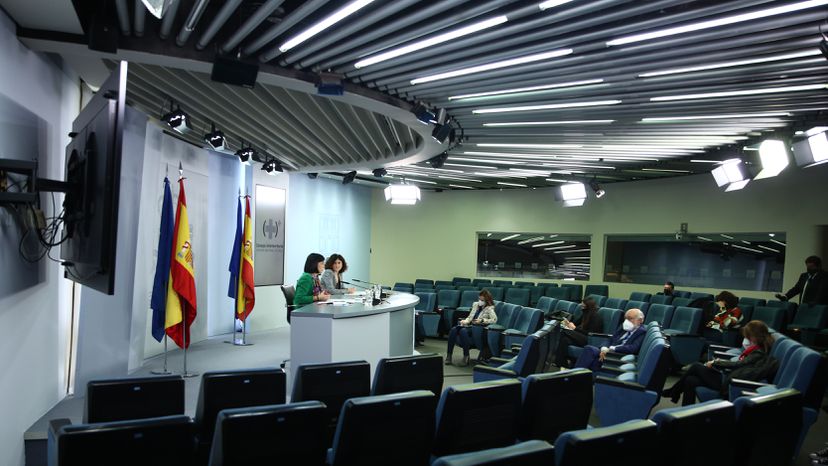 On video, statements by the Minister of Health, Carolina Darias.EUROPA PRESS/R.Rubio

The plan is to reach 70% of the adult population vaccinated during the summer. In Spain this is equivalent to 27.4 million people. According to the latest data from Health, there are already 2.1 million with the complete schedule and there are another 2.1 million with a dose awaiting the second. In addition, it must be taken into account that those under 55 years of age who have had a positive diagnosis in the previous six months will only be administered one dose, since it is sufficient for a complete activation of the immune system. Although this figure is not public, with the figures of registered cases of Health and age ranges since June published by the Carlos III Health Institute, an approximation can be made. There would be about 1.2 million people in this situation.

If we add the 5.5 million who will receive the Janssen single-dose vaccines, plus the 2.1 million who await the second dose, plus the 1.2 million under 55 years of age who have already passed the disease and therefore will receive only a prick, the result is that to fully immunize this population about 8.8 million doses are required. The total, adding the 2.1 who have already received the complete guideline, is almost 10.9 million fully immunized people.

If these 8.8 million doses are subtracted from the 32.3 million available doses, then another 23.5 million doses would remain in the second quarter, according to the Commission’s forecasts. With them, almost 11.8 million additional people could be set double standards. Adding the previous 10.9 million, the total is almost 22.7 million complete patterns, 58% of the adult population.

But again, that won’t be the exact order. In reality, if all the vaccines that arrive are given, there will be a higher percentage than that with the first dose and a lower percentage with the full schedule. And from July the arrival, predictably, will accelerate.

The conclusion, with these forecasts, is that the funnel will not be in the number of doses. Yes, it can be at the rate of administration that the system is capable of achieving. In an interview with EL PAÍS, Darias assured that this will not be a problem, that all communities are presenting plans and that they will expand their capacities as necessary, either by hiring toilets, doubling shifts or counting on the help of private mutuals, in health centers and large facilities, when necessary.

It will also be necessary to check whether public rejection of the AstraZeneca vaccine is an added obstacle. Despite the fact that both the European Medicines Agency and the WHO, as well as the Ministry of Health insist that it is safe and that its benefits far outweigh the risks, half of Spaniards distrust it.

The rate with Pfizer is 99%

The experience so far is that the pace is very good with Pfizer, but not so good with AstraZeneca. Moderna’s arrival rhythms are so irregular that it is difficult to assess them. The last day to evaluate this rate, in the case of Pfizer, is last Tuesday, since on Wednesdays the communities receive the new shipments and a new cycle begins. On Tuesday, March 16, almost 99% of the doses that had arrived from this pharmaceutical company had been injected.

In the case of AstraZeneca, it is necessary to go back before, since on Monday 15 the vaccination with this serum was stopped waiting for the European Medicines Agency (EMA, for its acronym in English) to investigate thrombotic events after inoculation. It is necessary to take the figure of March 9, when only 60% of the doses had been given. With the stoppage, this figure has fallen even more: there are almost a million vaccines from the Anglo-Swedish pharmaceutical company in storage, almost as many as those that have been injected. The rate of administration of this serum will have to rise rapidly to reach the objectives when vaccinations are resumed, this Wednesday, after the EMA found no link between the thrombi and the drug.

This vaccine will now have to face a possible rejection of public opinion. Despite the fact that both this European body and the World Health Organization, as well as the Ministry of Health insist that it is safe and that its benefits far outweigh its risks, half of Spaniards distrust it. According to a YouGov poll, 52% believe it is “unsafe”, up from 25% at the end of February.