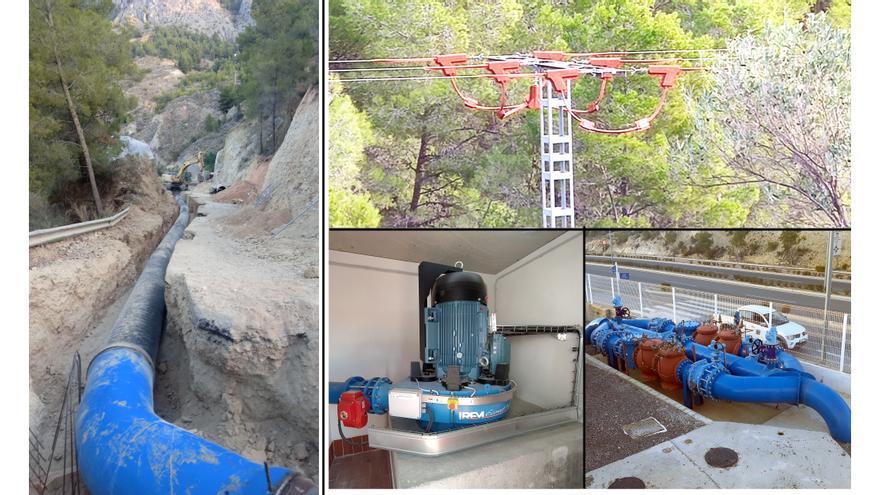 The Water Consortium of the Marina Baja It is located to the south of the Sierra de Bernia and with the termination on the Mediterranean in the Morro de Toix, belonging to the dry climatic region of the Iberian Southeast, with scarce and usually intense rainfall, an extremely irregular rainfall regime, which combines harsh and prolonged droughts with sporadic floods.

For what it constitutes, the difficult challenge to make compatible the extraordinary tourist and urban development of its coastline, with its center in Benidorm, and limited and intermittent water availability, very unequal from one hydrological year to another, has found in the agreements between the irrigation communities and the Consortium, the frame suitable for a harmonious, agreed, comprehensive and sustainable water management, fruitful and profitable for consortium municipalities and concerted irrigation communities.

The water management proposed by the Consortium is a successful model based on the agreement, interdependence, mutual commitments and reciprocal obligations of the participants, which produce extraordinary and singular synergy; it is viable and sustainable, with the broad and accurate response of an imaginative and technically well-resolved hydrological planning, which includes greater regulation of epigeal flows, improvement, subjected to continuous and rigorous control, of existing well fields and addition of new boreholes; and, very prominent, for its characteristics and consequences, the highly perfected reuse of reclaimed water, all this assisted by general pipelines that allow a successful symbiosis of two independent systems -white and recycled water-, which work in unison according to the rainfall and hydrological year, undoubtedly the most unique component of such a complex and well-articulated mechanism .

Finally, let us add the use of foreign flows, through the Rabasa-Fenollar-Amadorio pipeline, or to the reserve at the Mutxamel desalination plant. And it is noteworthy that, in prolonged periods of intense drought, the effluent from the Benidorm WWTP, to which should be added, in the near future, with similar quality, those of the WWTP of Villajoyosa and Altea, supposes the maximum guarantee of availability for agricultural use.

In short, fair agreements, satisfactory for all, and adequate hydrological actions have allowed us to face, with optimal results, one of the biggest imbalances in Spanish territory between water availability and demand; evidencing how the existence of adequate management and infrastructures, usually shared, designed for this purpose can allow and promote agreements, with mutual advantage and reciprocal benefit, between users whose positions could seem or be, in principle, antagonistic and difficult to reconcile.

The Water Consortium of the Marina Baja, since its creation in 1977, It has had to face a natural limitation of the first order, such as the high interannual irregularity of rainfall and the availability of water. The adaptable, ductile and flexible remote-controlled system from the Algar Pumping Station has been perfected to face interannual rainfall variability and inequality with one or another set of its conventional and unconventional sources of resources; and, specifically, for supplies, with white water: epigean, underground or, where appropriate, foreign provided by the Rabasa-Fenollar-Amadorio connection.

The economic impact of these conditions on the economic costs of water is very high, by decisively influencing the water-energy binomial and the acquisition of electricity. The most unfavorable situation arises with the purchase of external flows from the Rabasa-Fenollar-Amadorio connection during situations of intense and prolonged drought.

To guarantee that this emergency installation is always in perfect working order, the Consortium’s Technical Directorate has proposed that every year transfer a minimal amount of water to check the lines and the new Ramellat Pumping. The impact of the rainfall determining factor on the water-energy binomial is felt in the consumption of electricity and in the operating costs of the different supply sources: the epigeic resources provided by the Amadorio and Guadalest reservoirs are mainly fed by pumping. del Torres and Algar, to which others are added if the resources provided come from well batteries (Sacos-Algar and Beniardá) or from other pumping stations, such as the Mandem.

Specifically and once all the special characteristics of this Consortium have been defined, it is noteworthy that all the proposals and investments that are being produced always derive in the first place, the guarantee of the resources and in the second place in saving them, with which reflects that the distribution in high It is carried out at lower prices than in other Alicante towns (Alicante, Elche, Torrevieja, Javea, Denia, …).

For comparative purposes, the lower price of the distribution service in discharge makes the total cost for each cubic meter of water supplied and registered in discharge one of the lowest in the entire coastline of Alicante than in the municipalities of the Marina Baja. On the other hand, the Consortium performs an efficient management of resources that translates into the percentage of water losses is less than 1%, only that corresponding to the evapotranspiration of the reservoirs.

In short, the Management system of the Marina Baja, is established on 3 fundamental axes: