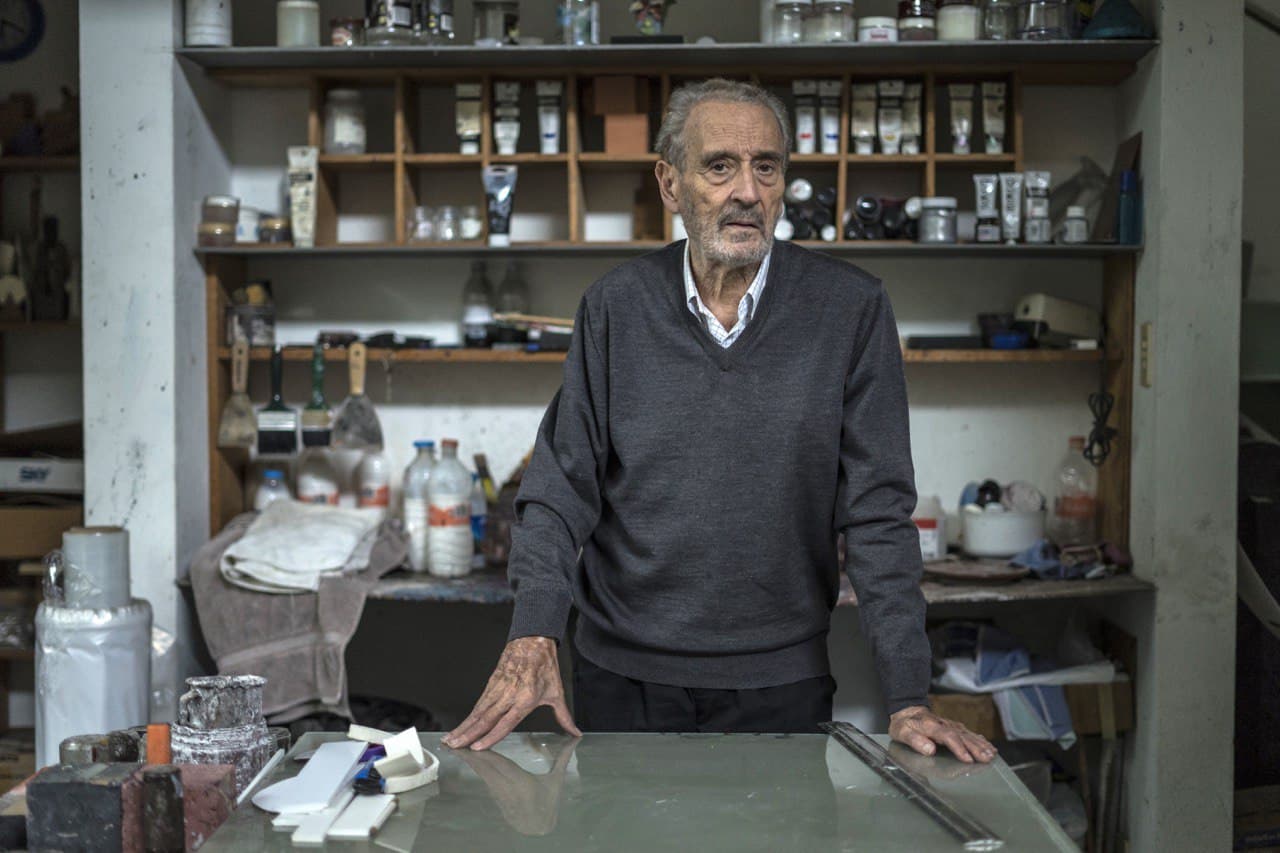 The artist Vicente Rojo has died this Wednesday afternoon in Mexico City, as confirmed by his partner, the poet Bárbara Jacobs to this newspaper. Rojo (Barcelona, ​​1932) was one of the pillars of Mexican graphics in the second half of the 20th century and one of the most fruitful creators of a generation of artists who subjected various disciplines to a dialogue that shaped modern Mexican art. . The artist had turned 89 years old this Monday. In a recent tribute that the Government paid him, through the Ministry of Finance, the abstract painter and editor said: “All I have done has been to help myself through life, to help me through my life, through my way of living. I suppose that at my age death can be around, but I don’t care ”.

Vicente Rojo was born in Barcelona in 1932. His father Francisco, a member of the Socialist Party, began the journey in 1939 from Bordeaux to the port of Veracruz on the ship Ipanema, a steamer that carried 994 other Spanish refugees in its belly. The man was the nephew of General Vicente Rojo, the last chief of the Republican Army’s General Staff and who organized the defense of Madrid against Franco’s troops. This is how Francisco’s eldest son was named, who at the age of seven at that time stayed with his mother in Barcelona to meet his father in Mexico a decade later. “I met him when I was 17, but during all that time my mother had the ability to make him always present in the house. My mother would tell us about him, we would read the censored letters that arrived together or I would send him small drawings in the correspondence, “said the artist in 2019 in one of his last interviews with EL PAÍS. That year Rojo prepared an exhibition on the journey that family history began on this continent. Upon his arrival, Vicente was reunited with his father, a union that he described as “luminous freedom.”

Rojo was 17 when he arrived in Mexico. Without having much idea of ​​the country that welcomed him, he confessed to Elena Poniatowska that when he arrived he felt that this was his country. The wonderful light and the gentle treatment of the Mexicans had conquered him. He settled with his family in the Narvarte neighborhood, a central middle-class neighborhood in Mexico City, which was already experiencing a powerful economic boom in those years. Red was struck by the public life of painters. “They thought about everything: politics, history, education, sports”, confessed to the author of Tinísima.

Rojo searched among his acquaintances for someone to act as a teacher. He found it in Miguel Prieto (1907-1956), who introduced him to graphic design. Over the years, this was to be one of Rojo’s definitive traces in Mexican culture thanks to the style that he printed in two newspapers, The Day Y One plus one, to which he added a very personal touch and a strong rejection of advertising. The blank in journalistic graphics, however, did it as an assistant in the influential supplement of Mexico in culture, directed by Fernando Benítez, one of the country’s leading intellectuals at the time. The publishing industry also changed thanks to ERA, a label he founded in 1960 with his friends, the Neus brothers, Jordi and Quico Espresate and José Azorín, all of them Spanish exiles like him.

His formal education was six years at La Esmeralda, the important school of Mexican art where Diego Rivera, Frida Kahlo, José Chávez Morado, Raúl Anguiano and Agustín Lazo were teachers. The latter, one of the fathers of surrealism in Mexico, was one of the first local influences for Rojo, who only stayed at the academy for six months. He continued to paint on his own until in 1958 he had his first exhibition in an independent gallery. A year earlier, in 1957, Rojo married the editor and cultural promoter Alba Cama, who was his wife until she passed away in 2003 after a long illness. Their daughter, the mathematician and sculptor Alba Rojo Cama, died in August 2016 as a result of cancer. The year he was widowed, Rojo became a partner with Jacobs, who was Tito Monterroso’s partner for three decades until his death.

With the 60s came a time of rich exchange. The artist was beginning to find his voice, which he refined after making friends with the painters Alberto Gironella, Manuel Felguérez and Fernando García Ponce. All these protagonists of the movement of rupture within Mexican plastic arts, which meant a cut with figurative painting and a commitment to abstraction and play with textures and geometry.

Cuauhtémoc Medina and Amanda de la Garza, curators of Written / Painted, Rojo’s last major retrospective, staged in Mexico in 2015, called the artist a triple agent of local culture. “The synergy of his contribution as a graphic designer, painter and editor had a weight in the cultural life of the country only comparable to that of public intellectuals such as Fernando Benítez, Ocatvio Paz, Jaime García Terrés, Carlos Monsiváis, Fernando Gamboa or José Emilio Pacheco ”, they wrote the commissioners.

This triple quality that the experts rescue can be illustrated with the case of 1968. Rojo dedicated the year to trying to carry out two collaborations with Octavio Paz, who at that time was the Mexican ambassador to India. The artist learned that the writer was finalizing an essay, at the request of the New York MOMA and the Philadelphia Museum of Art, on Dice: 1. The Waterfall, 2. The Lighting Gas, works by Marcel Duchamp. Vicente offered in a letter to edit the text. From that epistolary exchange originated the suitcase book Marcel Duchamp or The Castle of Purity (ERA, 1968), which became a work itself with texts by the French avant-garde translated by Tomás Segovia and facsimiles placed in a box with a chessboard-shaped cover. “Duchamp is going to be very happy,” wrote the Mexican Nobel Prize winner by letter when he had Rojo’s artifact in his hands.