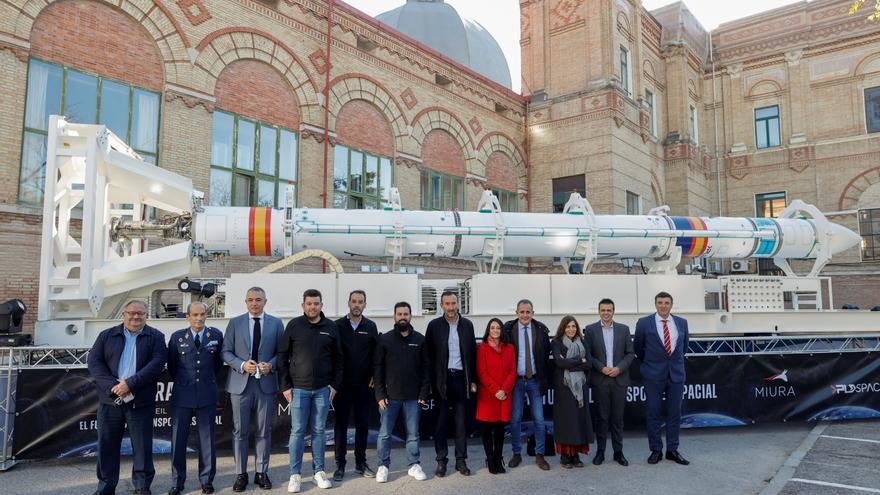 The suborbital vehicle presented in the square of the National Museum of Natural Sciences It is the culmination of the dream started ten years ago by two young people passionate about space, Raúl Torres and Raúl Verdú, project leaders and co-founders of this company that is making history in this sector, considered by Morgan Stanley as the next trillion industry of dollars.

The meeting in the capital of Spain brought together numerous institutional representatives, such as the director of the National Institute of Aerospace Technology (INTA), José María Salom; the head of the R&D Planning Area of ​​the Ministry of Defense, José Ramón Sala; or the head of the Office for the Coordination of Strategic Initiatives associated with the European Funds of the Center for Industrial Technological Development (CDTI), Jorge López. The former Minister of Science and astronaut, Pedro Duque, also attended.; the Regional Secretary for the Economy of the Generalitat, Rebeca Torró; the general director of Institutional Relations in the Valencian Community, Jorge Alarte; and the mayor of Elche, Carlos González.

Timeline of a success story

As explained the promoters of PLD Space and its executive president, Ezequiel SánchezSince its inception, the company’s goal has been to become a benchmark player in the aerospace sector, through its reusable rockets for launching small satellites. “We have always been clear that we wanted to take advantage of the business opportunity in the space sector and contribute to democratize it, making room for new players in this increasingly thriving industry, which will play a key role in the coming years. It has not been an easy road, but if to date Spain could only manufacture ships and aircraft parts, now we are also capable of developing space rockets, ”said Raúl Torres.

For this, Raúl Verdú added, “the support of institutions such as the CDTI, Enisa or the IVF, which have been co-financing the developments of the last ten years with our private investors, has been decisive. We are proud to have funded the first private space race program in our country.

For his part, Ezequiel Sánchez emphasized the strategic importance it has for Spain «to become the fourteenth country with access to spaceas this select group of nations will play a crucial geostrategic role for Europe. ‘ In fact, the company emphasized that the Miura 1 is not only the first Spanish space rocket, but it is also the first dedicated to transporting small-format satellites that is manufactured in Europe, which places the country at the head of this industry.

The rocket in question is a 12.5 meter high suborbital vehicle manufactured at the company’s facilities in Elche, designed to reach a maximum altitude of 150 kilometers and with the capacity to carry a payload of up to 100 kilos. After passing through Madrid, it will return to the PLD Space base at Teruel airport to carry out the combined qualification tests, with the aim of later moving to the company’s technical facility in El Arenosillo de Huelva. Once there, the ground infrastructure will be validated, with a view to its launch in the second half of 2022.

In parallel, PLD Space is also working on the development and fopening of its first orbital rocket, which it hopes will be ready for its first mission in 2024, and that will mean the start of commercial launches of the firm’s satellites. The Miura 5, as it will be baptized, will be a propeller three times larger than its predecessor, and with the capacity to carry satellites weighing up to 900 kilos, and its launch is scheduled to take place in French Guiana.

36 million financing obtained for the project

PLD Space has obtained 36 million financing, and is already working on a second round to reach 100.

100 new workers to join the workforce

The company is going to double its workforce with the entry of 100 employees.

The Miura 1 will be able to carry satellites of up to 100 kilos, while its successor will reach 900.

«The benefits will be multiple, since It will allow us to provide service to any company or institution that wants to put its small satellites into orbit, in the most feasible and secure way, and with a more contained budget ”, emphasized Verdú. In fact, the range of satellites that can be used by the Miura 5 will be very wide and for very varied fields. These include agriculture, defense and intelligence, energy and infrastructure, forestry, global communications, in-flight connectivity, rural coverage, climate change or natural disaster monitoring.

But behind this project there is not only a great technical and engineering effort, but also budgetary. And it is that the Elche company has already achieved more than 36 million euros of investment, 80% private and 20% public, and is already preparing a second round of financing to reach 100 million.

The company’s growth forecasts are also exponential, as Ezequiel Sánchez highlighted. In his words, “we hope to incorporate more than a hundred professionals during the next year, which means more than doubling the current team. We will continue to need a lot of talent to continue advancing in the successive phases of the project ».

The mayor of Elche, Carlos González, who attended the presentation accompanied by the Councilor for Economic Promotion and Industry, Carles Molina, praised the work carried out by PLD Space, making Spain one of the 14 countries in the world with space launch capacity . The mayor, in this sense, highlighted “the undoubted positive consequences in terms of visibility and socio-economic impact that this project entails for Elche, which is the place where this initiative was born and where this space technology is being developed.”