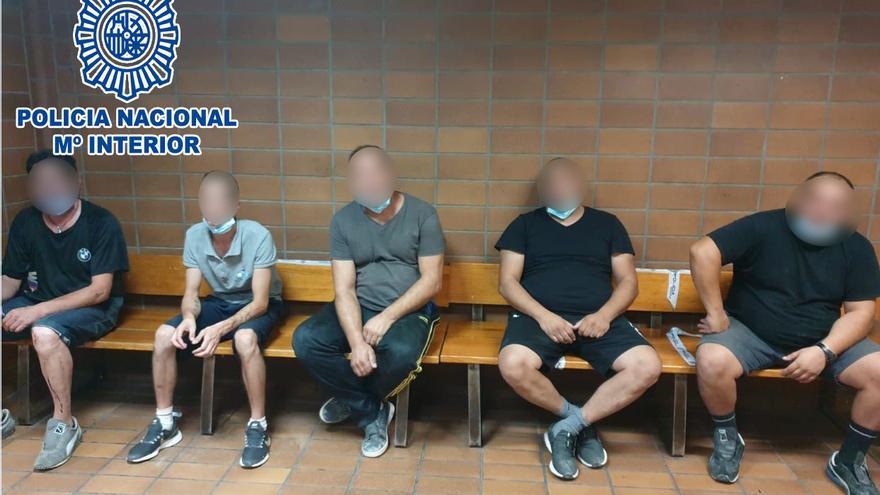 The police intervention was carried out recently after receiving a notice in room 091 from the security guard of the aluminum company located on Avenida de Elche in Alicante. The guard discovered that they had cut the access fence to the enclosure and also had already taken out a large number of aluminum rolls to take them away.

Agents of the Response Task Force from Alicante Central District Police Station they urgently traveled to the area and mounted an operation to locate the thieves. In this way, a patrol detected a rental van parked nearby and another saw a man who was next to a high-end car parked in a parking lot in the Palmeral. This person was monitoring the access road to the factory to detect the police presence and was located thanks to the expertise and seniority of the agents, who were aware of previous robberies and entered the place through secondary accesses.

Thus they located the member in charge of monitoring and the rest of the patrols deployed to strategic points to cordon off the area. The “vigilante” of the group of thieves he was very nervous and constantly gave contradictory versions about his presence in the place. In the end he ended up confessing that he was there watching and waiting to be notified when the van was loaded, which coincidentally he had also rented in his name. His mission was to go by shuttle in front of the van to warn them in case of crossing with the Police.

While the Police were with this person, he received a call on his telephone and provided the agents with the meeting place with the four material perpetrators who entered the factory. All four were arrested despite trying to flee and one hid inside a pipe.

An agent from Alicante at the scene. INFORMATION

In the car of the first person arrested, the Police found aluminum sales slips, which is why it is suspected that they had already committed similar thefts before.

The factory manager appeared at the premises of the Operative Group of Judicial Police of the Central Police Station and in addition to indicating that they had already suffered several thefts, he quantified the value of recovered aluminum at more than 2,500 euros and the damages at more than 200 euros.

The factory has a perimeter fence that extends through an orography that entails quite a bit of difficulty to reach it, and you must be a good connoisseur of the roads that lead there from the rear. According to the manager of the factory, they have had to repair the fence on multiple occasions at different points and have even observed that the different authors of the robberies have filled in complicated areas of the roads that reach the fence to approach with the vehicles they use. According to the Police, in this type of robbery, knowledge of the area, the seniority of the agents and the caution to establish quick and effective devices in the vicinity of the affected places without alerting them of their approach to the place, are crucial for success. of police interventions.

The agents continue with their own efforts to clarify more facts of similar characteristics, since the origin of a multitude of delivery notes that were seized from those arrested is being investigated.