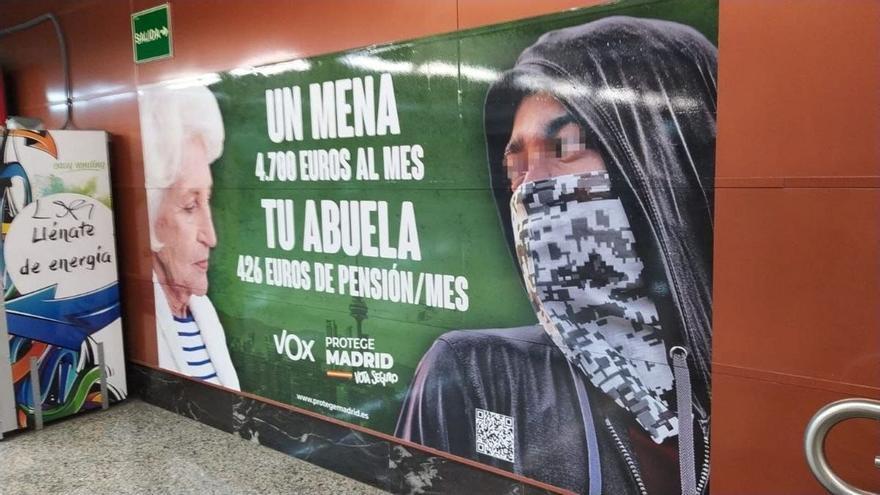 The opinion of the Police, “a technical report”, according to the sources consulted, contradicts that of the Prosecutor’s Office itself, which has opened investigation proceedings against Vox for an alleged hate crime. The Penal Code punishes with fines and sentences of up to four years in jail to those who “publicly encourage, promote or incite, directly or indirectly, hatred, hostility, discrimination or violence against a group, a part of it or against a specific person by reason of their membership of that group, for racist, anti-Semitic or other reasons referring to the ideology, religion or beliefs, family situation, the belonging of its members to an ethnic group, race or nation, their national origin, their sex, orientation or sexual identity, for reasons of gender, illness or disability “. The police report believes that the Vox cartel does not fit that behavior.

The diagnosis of the Police coincides with that of the judge on duty, holder of number 48 of Madrid, who refused to remove the electoral poster, as claimed by the Prosecutor’s Office. The magistrate stated that “There is neither danger due to delay, nor appearance of good law”. The Prosecutor’s Office understood that the cartel could provoke “gratuitous and prejudicial” attacks for unaccompanied and supervised minors in the Community of Madrid. After the judicial decision, the Prosecutor’s Office has appealed and it will be another judge who finally decides on the merits of the matter.

The police report also includes an analysis of all the reactions generated in social networks by the Vox cartel. And he finds no evidence of crime. On the other hand, he does appreciate the existence of a possible hate crime in the performance of a tweeter related to Vox’s thesis, Alvise Pérez, which on April 21 published a message on social networks in which linked immigrant minors to sexual assault: “1. 30% of minors in protection centers in Madrid are already ‘menas’. 2. A group of Moroccans has just kidnap and rape a young Spanish woman with a disability in a house in Parla“, he claimed.

The police report sent to the Public Prosecutor’s Office does warn of a crime in those messages: “In that case, unaccompanied minors are generically and falsely charged with a Serious felony, as a sexual assault, which they had not committed and which also turned out to be false “, explain the sources consulted.

The Vox poster against the ‘menas’ provoked a barrage of criticism from the opposition parties and was one of the main topics during the Telemadrid debate between the candidates to preside over the Assembly. The Community of Madrid itself denied the message implicit in the advertisement by underlining that it serves 269 ​​unaccompanied foreign minors and denied that each is allocated 4,700 euros per month.

The training led by Santiago AbascalFor his part, he defended the posters and even denounced that some of them, exhibited at the Cercanías de Sol station, were vandalized with graffiti, reproaching the “violence” of the performance. “We will continue to show reality throughout Madrid. We will continue to say that if they are minors, with their parents in their countries. And if they are criminals to their prisons,” they insisted from the Vox Twitter account.