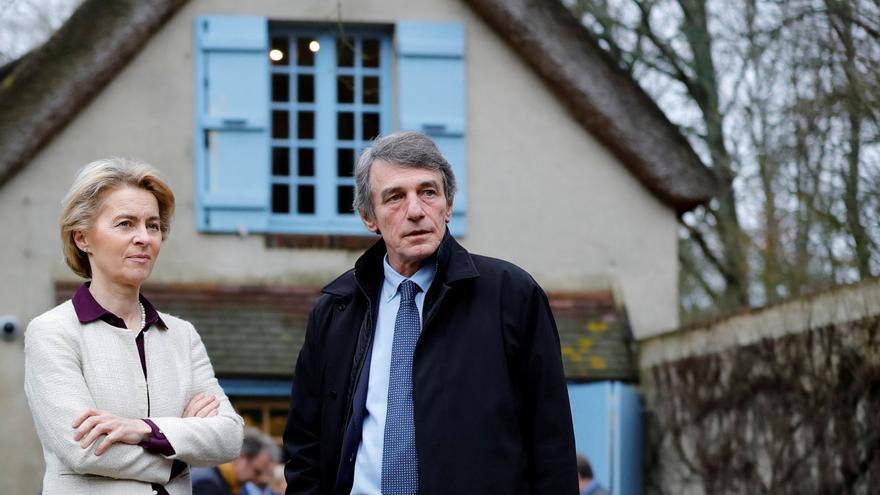 “I am deeply saddened by the terrible loss of a great European and proud Italian,” said Von der Leyen on his official Twitter account.

Sassoli was “a compassionate journalist, a prominent President of the European Parliament and, above all, a dear friend “, affirmed the German policy, after assuring that his “thoughts are with his family”.

For his part, the President of the European Council, Charles Michel, showed his sadness for the death of David Sassoli, of whom he said that he will miss “his warmth, his generosity, his kindness and his smile.”

“I feel sad and moved after the announcement of the death of the president of the European Parliament, David Sassoli,” confessed the former Belgian prime minister on his official Twitter account, while conveying his “sincere” condolences to the family and friends of the Italian politician.

A sincere and passionate European, we already miss his human warmth, his generosity, his friendliness and his smile.

Sincere condolences to his family and loved ones.

In Spain, the Prime Minister, Pedro Sanchez, has also expressed his condolences and highlighted the work that the socialist has done during the pandemic “for a more united and social EU”.

“What sad news is the death of President Sassoli,” the executive leader wrote on Twitter, reminding him of “a progressive friend, a great defender of European values.”

What sad news the passing of President Sassoli. A progressive friend, a great defender of European values, who in recent years worked firmly for a more united and social EU during the pandemic.

All my love for David’s family and friends. pic.twitter.com/14rahlsTyT

Sánchez has transferred in the aforementioned publication a message of affection to the family and friends of Sassoli, you have written in Italian.

Garzón and Díaz mourn the death: “A terrible loss”

The Minister of Consumption, Alberto Garzon, and the Second Vice President and Minister of Labor, Yolanda Diaz, have lamented this Tuesday the death of the President of the European Parliament, David Sassoli, who had been hospitalized since last December 26 due to a serious complication caused by a dysfunction of the immune system.

“A progressive man with deep democratic convictions. A terrible loss,” the head of Consumption has moved in a message that he has published on his profile on the social network Twitter. “What sad news”, he concluded his words.

What sad news. David Sassoli, President of the European Parliament, has passed away. A progressive man with deep democratic convictions. A terrible loss. 😥 https://t.co/ijnh1uXyaL pic.twitter.com/BAWPMUaEqG

In this same key, Díaz has praised his “good work, capacity for dialogue and firm commitment to humanist values.” “It is, without a doubt, a huge loss for the European family,” he assured.

The Minister of Labor conveyed her condolences to those close to him who has been President of the European Parliament since 2019 in these difficult times.

David Sassoli was good at work, a capacity for dialogue and a firm commitment to humanist values. It is, without a doubt, a huge loss for the European family.

My condolences to those close to him at this difficult time. pic.twitter.com/b09EvO7Ixy

It was his spokesman Roberto Cuillo who announced this morning the death of Sassoli, at a quarter past one on Tuesday, a few hours after announcing, also on Twitter.

After contracting pneumonia last September, Sassoli had spent more than two months recovering in his native country and he had recently returned to political activity when on December 26 he was admitted to an Italian hospital again.

His entry was not made public until this Monday when his spokesman announced the cancellation of all his public events.