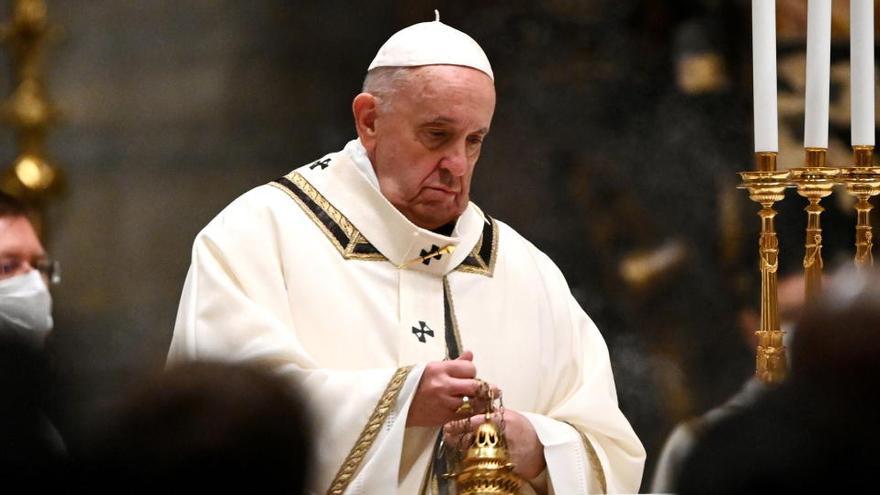 Pope Francis officiated this Thursday the more solitary mass of the rooster, before a few faithful and advanced to respect the curfew due to the pandemic, and called to serve others fleeing from the behavior of the “illiterate of goodness”.

“You who save me, teach me to serve. You who do not leave me alone, help me to console your brothers, because from tonight all are my brothers” were the words with which the pontiff concluded his homily on Christmas Eve, in a basilica of San Pedro rarefied.

And is that the temple Vatican on a festive date as important as this, in which the birth of Jesus of Nazareth is commemorated, one of the most important Masses of the liturgical year, if not the most.

On this occasion the pope was accompanied by his concelebrants and by about one hundred and fifty faithful, men and women religious and residents of the papal State, all separated and wearing masks.

Christmas, a period of rebirth

In his homily the pontiff explained that Christmas is a period that allows the faithful “to be born inwardly again” and that is why he launched a message of brotherhood and religiosity, even quoting the American poet Emily Dickinson.

“Today God amazes and tells each one of us: ‘You are a marvel’. Sister, brother, do not be discouraged Are you tempted to feel out of place? God tells you: ‘No, you are my son!” , despite the “ingratitude” of man and injustices.

Francisco wondered why the messiah was born at night, poor and rejected, without decent accommodation: “To make us understand to what extent he loves our human condition: to the point of touching with his concrete love our worst misery,” he said.

For this reason, this period of spiritual renewal takes precedence over the behavior of the men of our time who “hungry for entertainment, success and worldliness” feed their lives “with foods that do not satisfy and leave a void within.”

Because people said “We talk a lot, but we are often kindness illiterate.”

“It is true: insatiable to possess, we throw ourselves into so many mangers of vanity, forgetting the manger in Bethlehem. That manger, poor in everything and rich in love, teaches us that the food of life is to let ourselves be loved by God and to love others. others, “he said.

Thus, he called to attend to the needs of others: “His helpless love, which disarms us, reminds us that the time we have is not to feel sorry for ourselves, but to comfort the tears of those who suffer.”

This solemn ceremony for several years has not been celebrated at midnight but this time it has had to be advanced even further, by two and a half hours, at 7.30 pm local time (6.30 pm GMT), to respect the night curfew imposed throughout Italy .

The mass began with the announcement of the birth with the reading of the ancient text of the “Kalendas” and then Francisco discovered an image of the Child Jesus already placed on one side of the altar and kissed her knee.

In addition, the Eucharist, also broadcast in sign language, took place at the altar of the chair of Saint Peter, in the apse of the temple, and not at the papal altar, which is located in the center of the basilica, under Bernini’s imposing canopy. .

Outside, the Plaza de San Pedro appeared spectral in this cloudy Roman day, illuminated by the tree and the Portal de Belén but only populated by police patrols in charge of security and monitoring compliance with the rules.

The virus that stole Christmas

And it is that the coronavirus has marked the year of the pontiff, who has undergone several tests in recent months and some of whose collaborators became ill.

This mass of the Rooster begins a Christmas celebration entirely unusual, due to the restrictions imposed by the pandemic and in which there will not be acts with thousands of faithful as always.

This is due to the fact that the Italian Government confined its population during the great days of these festivals and their eve and they are only allowed to leave the house for reasons of necessity.

In the morning of December 25 Francis will read his Christmas message and will impart the blessing “Urbi et Orbi”, addressed “to the city and to the world”, inside the Apostolic Palace and not from the balcony of the central loggia of St. Peter’s Basilica.

It remains to be seen if he will decide to look out on this balcony for a silent blessing before a confined Rome, as he did on March 27, when he blessed the world before an empty, dark and rainy square, in the worst moments of the health crisis.

The Angelus of January 26 and 27, as well as those of January 1, 3 and 6, 2021, will take place in the library of the Apostolic Palace as Italy will remain confined.

While on the last day of the year he will celebrate the first vespers and the Te Deum in thanksgiving of the year that concludes again in a deserted Vatican basilica.

In any case, the Argentine pontiff has invited think that these restrictions can serve to discover the true meaning of Christmas beyond consumerism.