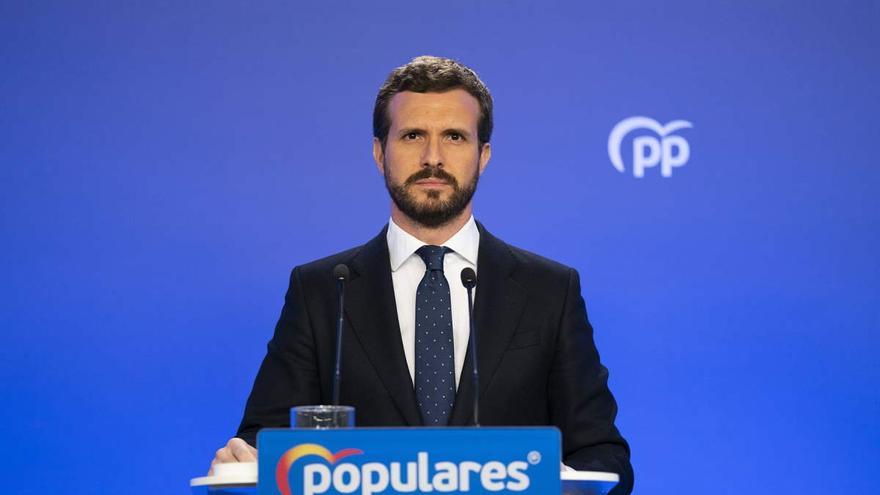 The leader of the PP, Pablo Casado, has required Pedro Sanchez that he cease all members of his Government who do not clearly condemn the violent altercations of the last nights over the conviction of the rapper Pablo Hasél. Minutes before the chief executive condemned the incidents in a forceful way, Casado has made Sánchez ugly that he has not stopped the feet of his second vice president, Pablo Iglesias.

“If he does not stop his vice president’s feet, he is taking responsibility for what happens,” he snapped at the Prime Minister at an online breakfast at the New Economy Forum. The leader of the conservatives, who has shown his support for the police, has indicated that Sánchez, in addition to removing the secretary general of Podemos from the Council of Ministers, should censor “the political spokesmen who are encouraging this kale borroka”, in reference to Pablo Echenique.

Along the same lines, the PP spokesperson in the Interior Committee of the Congress of Deputies, Ana Belén Vázquez Blanco, has charged Iglesias for encouraging the riots and against Sánchez for allowing him: “Mr. [Pablo] Iglesias is guilty of what is happening in the streets and the lord [Pedro] Sánchez he is responsible. “The popular leader has focused her criticism on the Prime Minister for not reprimanding his partners when last Thursday they criticized the police action.

At the appearance of the Minister of the Interior, Fernando Grande-Marlaska, the PP deputy has indicated that the second vice president “should have already been dismissed” after the parliamentary spokesman for United We Can, Pablo Echenique, will show its support for the “young anti-fascists who are demanding justice and freedom of expression in the streets.” “Is democratic normality for a government party to support violence in the streets?” Vázquez asked the minister, referring to Iglesias’ criticism of the democratic normality of Spain.

Hours before, the PP spokesperson in the lower house, Cuca Gamarra, has also pointed to the chief executive as the final person in charge of the United We can instigate the protests. “It is Sánchez, who is the one who appoints the members of the government and allows there to be a person who is silent in the face of these events and continues to promote attacks on what is the constitutional structure and order.”

However, a few minutes after the PP deputy attacked the Government in the Interior commission, Sánchez has condemned the violence. “In a full democracy, and Spanish democracy is a full democracy, the use of any type of violence is inadmissible”, the head of the Executive has sentenced in an act in Extremadura. Next, he stressed that “there is no exception to this rule. There is no cause, no place, or situation that can justify the use of violence, because violence is not a freedom, it is an attack on the freedoms of others. “. Thus, he has assured that “the Government of Spain will face any form of violence.”