The PP is on the verge of achieving an absolute majority in the Andalusian elections next Sunday, June 19. Only two seats separate him from such an ambitious summit, according to a survey carried out by GAD3 for ABC ten days before the voting. The electoral pull of the current president of the Junta de Andalucía, Juanma Morenowould translate into 53 seats and 41.2% of the votes. The personalist campaign that he has devised, with all the spotlights on the candidate beyond the acronym, would have served him to lead his main rival by more than 15 points. Not even changing the headliner, the PSOE manages to come back and recover the lost confidence of the Andalusians.

The absolute majority threshold is 55 deputies in a Parliament with 109 seats. If the elections were held today, the PP would get more than double the number of deputies than in the previous elections on December 2, 2018 (26 representatives and 20.8% support), in which Susana Díaz took the victory, but got the worst results in history for her party. For the first time the right (PP, Ciudadanos and Vox) added more than the left, which caused the socialists to be evicted from the San Telmo Palace, the seat of the regional Presidency, where they had been comfortably installed for almost 37 consecutive years since the transition. 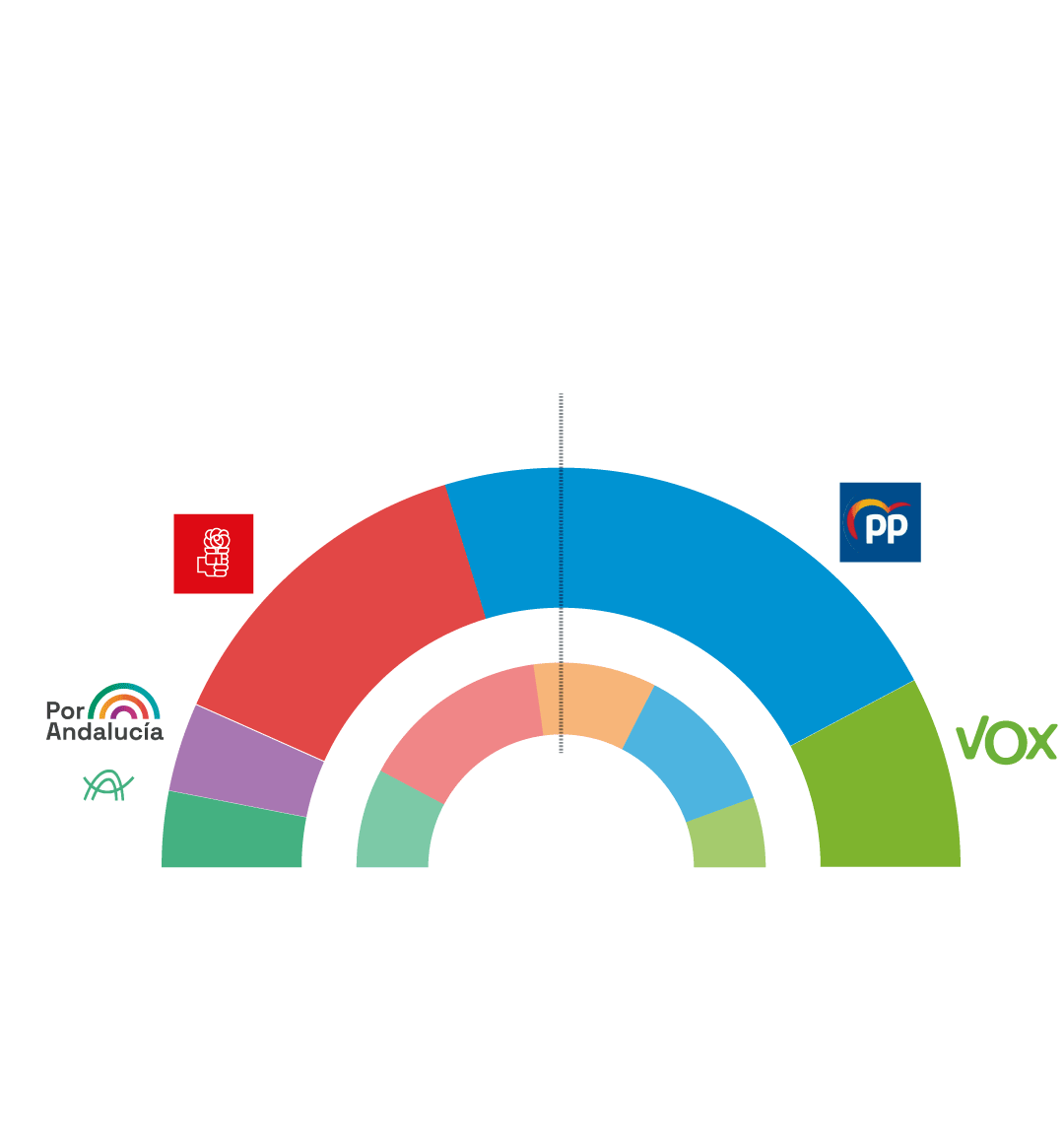 Estimated vote in the Andalusian elections

In percentage of vote

In 2018 Adelante Andalucía included, among others, Podemos and IU

Estimated vote in the Andalusian elections

In percentage of vote

Also Read  some of his actions 'are beneath him'

In 2018 Adelante Andalucía included, among others, Podemos and IU Now, the Conservatives would not only win at the polls -and for the first time they would do so in the eight Andalusian provinces-, but even

they would beat the mark of 50 seats that Javier Arenas achieved in the regional elections of 2012, the only time that the popular have won in Andalusia, a territory traditionally hostile to the right.The great threat of election day under the scourge of heat is demobilization. GAD3

has made its vote prediction on an estimated turnout of 64%

. In 2018, it stood at 58.7% and was unusually low. So, the PSOE lost 400,389 ballots because many of its potential voters stayed home. Andalusians seem to have acted with more foresight now: postal voting has skyrocketed by 98%. Citizens, from the ‘sorpasso’ to the debacle After three and a half years of shared management with Cs, the PP would look at the PSOE dwarfed from the rearview mirror and electorally eat its government partner. The Vice President of the Board and candidate of the Liberal Party, 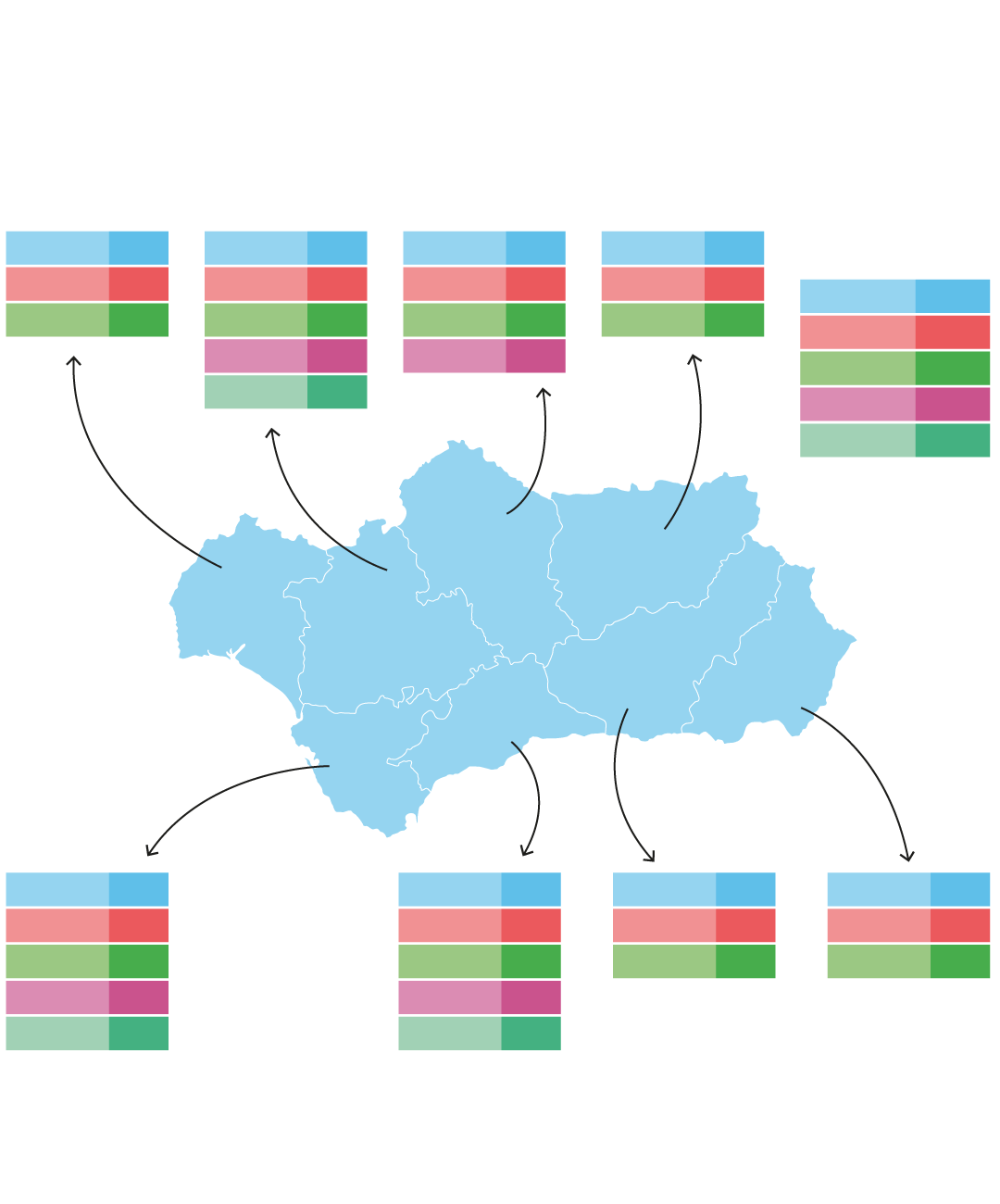 Juan Marín, would star in the 19-J debacle by staying out of the Chamber

with only 2.2% of the ballots, according to the GAD3 survey. It would be a dramatic epilogue for Cs. He would go from aspiring to overtake the PP in 2018, when he reached 21 seats, to fall into political irrelevance, even having managed notable portfolios with a large budget, such as Education, Employment, Social Policies or Tourism.

Vote estimate by provinces The scenario drawn by the survey, based on a thousand interviews conducted between June 7 and 9, represents a historic turnaround. Moreno, who has

cultivated a moderate and transversal discourse during his tenure and in the campaign, it would have broken completely with the mistrust that the PP still aroused in the Andalusian electorate more inclined towards center-left positions.The harvest should be enough for the PP to rule alone by brushing the fingers of the absolute majority. His candidate has not stopped demanding a large majority from the Andalusians to send without ties and not depend on Vox. In his quest to become

the great center-right reference Moreno has not hesitated to present himself as a containment dam to prevent Santiago Abascal’s deputies from entering his hypothetical government.Moreno would have achieved his goal of concentrating by himself more seats than the entire left put together. The PSOE would get 33; For Andalusia, 4, and Forward Andalusia, 3 . In total, 40 deputies. It would be enough for the president that the 16 deputies (14.1% of votes) that the Vox candidate, Macarena Olona, ​​would obtain, abstained and did not ‘pinch’ with the left to block his investiture. Olona improves the results of the judge Francis Serranoin 2018, when Vox debuted in the Chamber with 12 seats and 11% of the vote. However, it would not reach the 20 seats predicted by the CIS of José Félix Tezanos. You run the risk of not meeting the expectations generated. Abascal has taken entry into the Andalusian Government as one more step in his career to edit a pact at the national level with the PP of

Alberto Nunez Feijoo . Normalized the political alternation in Andalusia, the PSOE, with the former mayor of Seville Juan Espadas as headliner-unknown to a large part of the electorate-, would register a slight setback in votes that would not subtract seats. The explanation for this paradox lies in the proportional calculation system of the D’Hondt Law, which makes that number of votes without parliamentary translation end up in the basket of the lists with the most support.

. The new electoral mark of the emptied Andalusia would not take minutes for this province, with 0.2% of the votes cast by the electoral poll. In less populated constituencies at least 7% is needed to obtain representation. split left The amalgamation of formations to the left of the PSOE pay dearly

its fragmentation and internal disputes before and during the preparation of the electoral lists, although in his case the vote is not as heavily weighted as in the right-wing bloc.According to the demoscopic portrait offered by the consulting firm he chairs Narcissus MichavilaFor Andalusia, the brand that brings together Izquierda Unida, Más País and Podemos, among others, would only get four seats, a very poor result for the platform that leads

the Second Vice President of the Government and Minister of Labor, Yolanda Díaz

. Adelanza Andalucía, the nationalist formation of Teresa Rodríguez, could improve its harvest and scratch three seats. But they do not equal the 17 seats of 2018, when they ran together. A stagnant PSOE, with an atomized left, would have no chance of recovering the Board.