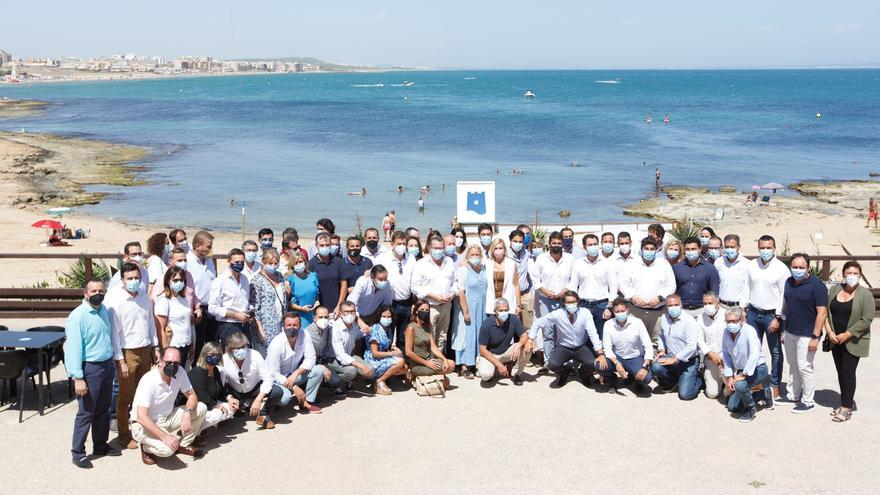 Back to the old tradition. The PP of the Valencian Community and the one of Murcia have celebrated today a massive lunch in Torrevieja, as it was established in the years of wine and roses of Eduardo Zaplana and Ramón Luis Valcárcel. Around 80 political and institutional positions They have met in an exclusive restaurant in the coastal city. The meeting has been organized by the president of the party in the Valencian Community, Carlos Mazón, and his counterpart in the Murcia region, Fernando López Miras, who have been supported by the party’s secretary general, Teodoro Garcia Egea. The meeting has served to stage the alliance between two groups that seek to make common force to place issues that affect both territories on the national agenda. “In aspects such as financing, water or the Mediterranean Corridor, the Valencian Community cannot walk alone. We must weave alliances and claim that it is our turn”, Stressed the leader of the popular Valencians.

The conclave takes place a few days after the start of the new political course, the first of Mazón at the head of the PPCV. It will also be the course prior to the holding of the regional elections, provided that there is no advance in the elections. The party, led by Pablo Casado, is making every effort to enhance the visibility of the president of the County Council and has focused on the Community; a territory that was the watchword of the PP for two decades, until the Botanic came to power. So much so that in the strategy outlined by Genoa the celebration of the PP national convention next October in Valencia.

López Miras and Mazón have publicly shown their alliance to try to get new regional financing for the two communities, which they see as the most “punished” in Spain by the central government. Financing, water and infrastructure, especially the delayed Mediterranean Corridor project, are the three axes of the shared agenda.

The meeting between positions of the PP has taken place in Torrevieja. Alex Dominguez

López Miras has assured that in financing the Murcian and the Valencian are “the two most affected” in the whole country, which makes their citizens are treated “as second-rate Spaniards” since they do not have the same resources and social coverage as the rest. Del Corredor, has shown that the future connection between both territories articulates 50% of the population and of the Spanish GDP despite which “it is stopped”, and on water has said that the retreat of the Tajo-Segura for reasons ” sectarians “puts agricultural exports and 300,000 jobs at risk.

Mazón has agreed with the diagnosis and has stated that the PP start the course “very proactive” and with the desire to provide “solutions to the problems” for the main challenges that exist, which are added to the fight against the health pandemic of the covid-19.

Regarding the financing, he pointed out that there will be a “common front” with the Region, and has also opted for the need to implement a fiscal revolution as other communities have started, including Murcia.

“You have to be vindictive and say that the Community is up to it. We do not want to be better than anyone nor do we want privileges above anyone, but we have been below others for too long and this is truly the time for the Valencian Community ”, he stated. Thus, the president of the PPCV has defended that the Community is above everything else ”and has called to“ claim with pride what corresponds to us ”.

The number two of the national PP, Teodoro García Egea, has subscribed the opinions of his two barons when commenting that the Valencian Community and the Murcia Region “are the two worst financed by the Government, the worst treated” and has disfigured the Executive of Pedro Sánchez who “does not spend a minute” trying to solve his problems.

In this regard, he sees “silence and indifference” in Sánchez towards these territories, and in some cases even worse, such as wanting to “alter the rules of the Tagus” despite the fact that the transfer worked with rules agreed in its day by all the administrations involved.

He also regretted that the infrastructures in the Community and Murcia “are conspicuous by their absence” and has opined that the connections should not only be radial “but connect territories that have a lot to contribute to each other.”

In the same way, he has referred to other issues, such as an electricity bill “that breaks records” despite which he has said that today President Sánchez has not said “not a word” even when small and medium-sized entrepreneurs and freelancers “they are drowned by the rise of the receipt.” It has continued that in these matters Pablo Casado has extended his hand to the central government without it having picked it up, as he did 18 months ago asking for a pandemic law to prevent the autonomous communities from having 17 regulations that, in addition, their respective courts superiors of justice can “knock down”.