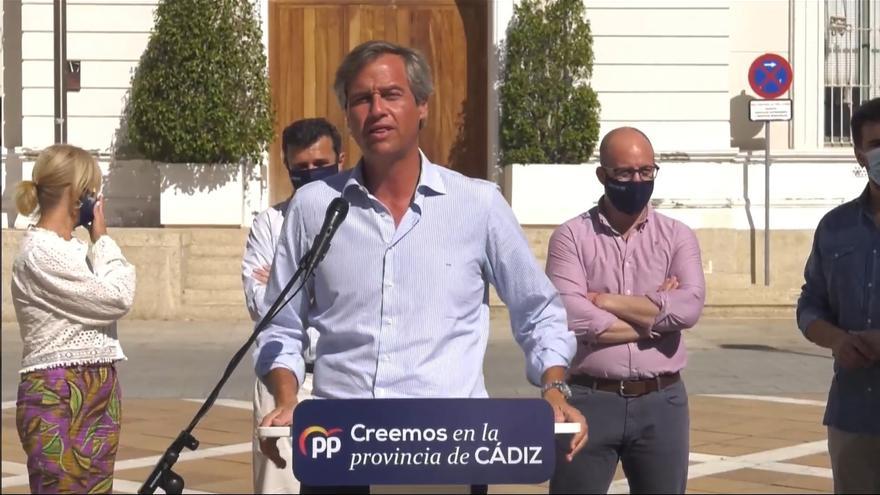 The vice-secretary of Territorial Policy of the PP, Antonio González Terol, has criticized this Sunday the management of the National Executive of PSOE and United We Can, and has said that the “triumphalist balance” of Pedro Sánchez, “instead of Cumpliendo, should be called Lying, since deception of the Spanish is the only constant in your Government “.

This is how González Terol has declared himself to the media in El Puerto de Santa María (Cádiz), where he has accompanied the provincial secretary of the PP and mayor of the town, Germán Beardo, whom he has given as an example of management “as opposed to Sánchez” , whom he describes as “the Olympic champion of incompetence and lies”.

González Terol has criticized that the Prime Minister a year ago he proclaimed “that we had defeated the virus, controlled the pandemic and bent the curve “, and a little over a week ago he affirmed” that Spain was making progress in the recovery thanks to its Government, which acted with the commitment to leave no one behind. ”

Well, today “thanks to the inaction of Sánchez and his Government, the fifth wave of the pandemic is hitting our country hard, it is known that the Delta variant will subtract close to 3,000 million euros from GDP in the summer and will doubt that they are achieved GDP growth figures in 2021 that the Government has encrypted at 6%, “González Terol lamented, adding that Spain is a” world leader “in the rate of admitted to the ICU due to covid.

In his opinion, this “sad leadership” is explained by several reasons: the first is that Pedro Sánchez “has left the autonomous communities abandoned” in the face of the virus, has not provided them with “the necessary legal instruments” to fight the covid and in July, in addition, “it sent them half of the planned doses”, delaying and paralyzing the vaccination and immunization of all Spaniards.

“Mr. Sánchez, the autonomous communities continue to demand a Pandemic Law to adequately cope with this terrible disease, “he added.

In his speech, González Terol also said that Sánchez “goes against the governments that defend freedom against interventionism and lower taxes against a fiscal socialism that confiscate from citizens and companies what they have earned with your effort and your work “.

For this reason, the popular estimates that the low tax policy that the PP has applied in the Community of Madrid since 2004 has allowed Madrilenians to save more than 48,000 million euros, an average of 15,000 euros in savings per person, so opposes “the governments of freedom of the Popular Party against the fiscal hell of Sánchez wherever the Socialist Party governs. ”

González Terol has urged Sánchez “to return to institutionality and respect the decisions of the courts “and that” stop blocking the renewal of the constitutional bodies and get your hands off justice. “” Spaniards deserve a government that respects the separation of powers and judicial independence, a government that It will come from the hand of Pablo Casado, “he said.

He has assured that Sánchez’s policies have caused that 736,000 Spaniards who worked in 2019 today cannot do it, that the vital Minimum Tax (IMV) only reaches “a third” of the applicants and that the price of electricity has broken all historical records this year.

“The Government of Sánchez he has gone quietly on vacation because they have managed to buy the support to continue on board the car and the official plane, continue to buy luxury chalets and place the nanny as an advisor to a minister, “he stressed.

He has asked Sánchez “to stop promoting inequality among Spaniards, to show his face and convene the debate on the state of the nation” to explain “if he will continue to despise the CCAA loyal to Spain and the Constitution “, and that it clarifies what has happened with the help to Plus Ultra, if it will transfer the competence of the MIR to Catalonia, that it explains “the true” negotiating agenda with the leaders of the procés and “if it will continue to sell to Spain to remain in La Moncloa”.

Finally, he said that in the case of local entities “the abandonment of the Government has been absolute” and, a year later, it still does not launch the 3 billion euro covid fund that it promised.

“The best mayor in history”

González Terol’s work schedule ended this Sunday in Port, after holding a meeting with “the best mayor in the history of this city”, referring to Germán Beardo, as he has said in his statements to the media.

He has summarized the work of the Portuense councilor with the fact that he has achieved that the municipality “be present in public life again”, with actions that it specified as the new jobs list (RPT) or the comprehensive improvement of Aurora Street, which will benefit a school in the area.

“They tell us to be on the street and close to people. That is what we have done this week: defend the interests of the municipalities, “he said.

He also coincided with the mayor of Porto when praising the “team“that the party has to defend citizens and their demands and interests.

Beardo assured that the city is experiencing a good summer “within what is the pandemic, hand in hand with hoteliers and merchants” and being aware of security measures and with the aim that “the economy goes up, serving the tourist sector as one of the main in this city “.

“With Pablo Casado we will have the leg that is missing in the province and in the Portuense town because Pedro Sanchez It has not gone through El Puerto nor its policies either, “he concluded.