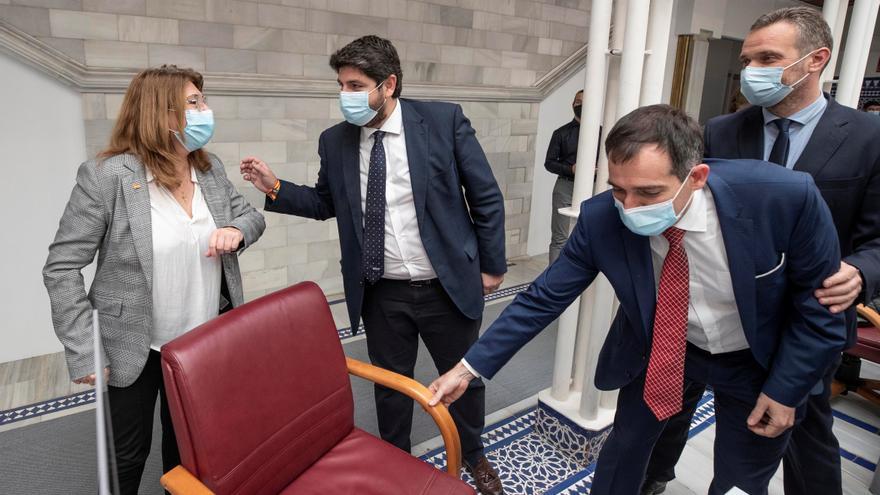 Liarte’s statements before expressing his clear support for the Government implicitly revealed that it was possible to negotiate with the PSOE in this regard, since in relation to this matter there were shades of gray between black and white, implying that the socialists could accept a ‘ pin ‘nuanced that would be acceptable for both parties on the pretext that to reach an agreement everyone has to give in.

Deputy Liarte is the Anguita of the regional Parliament: program, program, program. That has been his game in the tessitura of the motion of censure when verifying that both PP and PSOE were in his hands. And although it seemed obvious that, given his ideology, he would have to decide for the popular ones, he made it clear to them from the beginning that, since he does not obey any party discipline, he was willing to vote for whoever assumed his programmatic demands, with the nuances that were necessary, but without giving anything to anyone.

The PSOE came to suppose that this was so, without realizing that deep down such an ordeal constituted a pressure for the PP, and was about to offer that pearl (“in the PSOE they have told us that you can talk about the parental pin” Liarte declared yesterday) before Fernando López Miras showed himself willing, not only to assume the parental pin but to give the exVox the very Ministry of Education so that, as a gesture of guarantee, they could administer the matter. Liarte also had a predilection for the Ministry of Social Policy (that is where Women and LGTBi are registered, sensitive issues for Vox), but in the PP they objected that they could only open a gap in any of the ministries under their charge, since the four of the initial pact with Cs were sacred, even though Cs as such is no longer in the Government.

It is true that putting the Ministry of Education in the hands of the exVox will undoubtedly mean raising a continuous conflict in the education sector and permanent mobilization: unions, parents’ associations, etc., but the answer they gave me is very significant. yesterday a senior PP official when I told him that this situation would occur: “We prefer to have this problem than for a PSOE government to have it,” thus implying that the Socialists would have had to give in in similar terms to win the motion of censure .

Would Diego Conesa have integrated the exVox into his Governing Council? The question is horrifying, but the national slogan (“this motion cannot fail”) invites us to suspect that any transfer could have been justified for the sake of a higher motivation: to throw out the PP. And in this objective, the end would justify the means. Liarte, who without being a politician is the best politician in the parliamentary arch, has all his contacts registered with both the socialist Lucas and the Cs spokesman, Juanjo Molina, who has played the role of negotiator on behalf of his party and the PSOE with the exVox, without the PSOE getting more wet than necessary, and in those records it will be possible one day to show how far the alternative coalition to the PP government (PSOE and Cs) was willing to give in favor of the unruly bench with Abascal . However, the PP-exVox pact does not start very well, because in the PP they assure that López Miras has been angered by the anticipated leak of the change in the Ministry of Education, since it supposes a logical discomfort with the current holder of the portfolio , and more because the matter is not yet closed: negotiations with the exVox will try to close over the next week.

In addition, there are two loose ends in this agreement that analysts of national politics will have to investigate. One: the entry into a PP government of a counselor from the original Vox nucleus could call into question the image of a Pablo Casado who intends to place himself in the political center by laminating Cs. On the other hand, having ex-militants from Vox could anger the genuine ones, who have been invited by Teodoro García to go to the ‘common house’ on the right.

And something more important for the development of the PP after the motion of censure: in exchange for counseling the exVox, the PP will demand that this group assume the whole of the Government’s policy in other areas, to prevent the counseling in charge of these new partners in the Executive is a separate government, and even the personal tutelage of the president will probably be agreed; that is to say, López Miras could be a supervising Education Minister, in the way that mayors are in turn councilors, since all powers belong to them before delegating them.

The motion of censure, In practice, it has served to project the image that the PP has won the elections again without the need for elections, and to promote a face-to-face show of a triumphant Casado who is destroying Cs and absorbing the best assets of Vox, and all because of the recklessness of the PSOE in not withdrawing the motion of censure when it was obvious that he was going to lose it. And with it, some of his electoral essences, to the point that at the same time that he denounced the ‘tránfugas’ of Cs, he hoped to win the motion with the votes of the former Vox deputies. At whatever price? “This motion cannot be lost.”