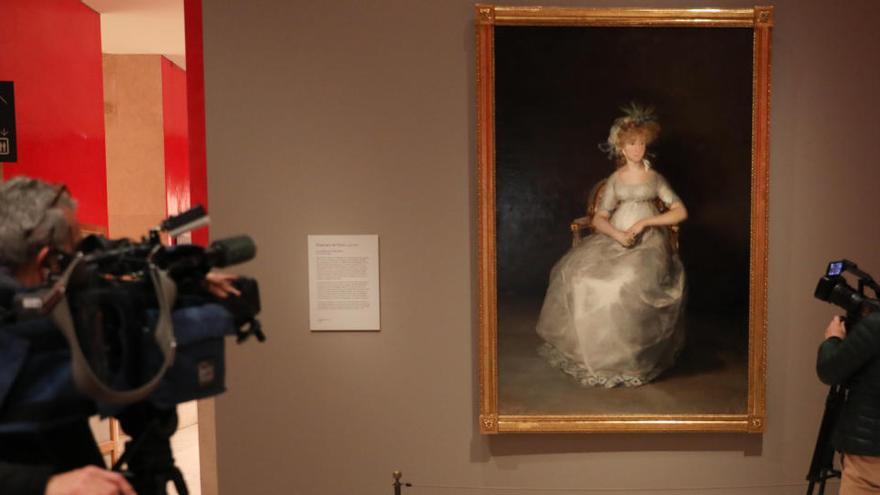 The Prado Museum has presented the restoration of ‘The Countess of Chinchón’ by Goya, quintessence of the court portrait painted on an image of Godoy and that reveals “the painter’s polyhedral facet” and allows us to appreciate in detail his brushstrokes in a masterful use of “white and gray tones”.

The painting has been restored by Elisa Mora who puts the finishing touch on her career as a restorer after 38 years at the Prado. “It is a delightful painting that undoes one of Francisco de Goya’s clichés, in which only the painter of violence, war and tearing is shown, to show his facet as a multifaceted and complex character: a Goya sensitive and familiar “has highlighted Andrés Úbeda, director Deputy of Conservation and Research of the Museo Nacional del Prado.

The anteroom of the Muses of the Prado Museum has hosted this morning the presentation of the restored work, through a process in which phases such as the “fixing of the pictorial layer” or the “removal of the oxidized varnish” stand out, which allow observing the brushstrokes of this painting documented in the year 1800.

Made on a canvas that, according to the technical study, Goya already used on two previous occasions to portray Godoy himself and an unknown gentleman, who was in “excellent condition”, and where the portrait of the Countess can now be seen of Chinchón, in which aspects such as the “lightness of the brushstrokes” and the “little material used” stand out..

The portrait, whose restoration began in March 2020, already had “minor interventions in the work” until his arrival at the Prado in 2000, after having previously passed through the Godoy Palace, the General Deposit of Kidnappings and the Boadilla del Monte Palace (Madrid), in the possession of the direct descendants of María Teresa de Borbón y Vallabriga , Countess of Chinchón.

“Today we celebrate three miracles in the Prado, the miracle of Goya, that of the Countess of Chinchón and also that of Elisa Mora,” said Úbeda, referring to Mora, restorer of the work that ends her professional career with this project. 38 years at the Prado Museum, which the director has defined as “years of dedication and public service”.

In a restoration process that Mora has defined as “nice and simple“, the portrait, in which the Countess of Chinchón can be seen wearing a white gauze dress and a headdress with green spikes, has been intervened” by reinforcing the corners of the original canvas “, in addition to” exchanging various patches for linen threads of fabric applied in the past over small tears “, he explained.

They have also been a key part in the restoration “fixation of the paint layer” as well as the “removal of oxidized varnish”, which allows us to appreciate Goya’s brushstrokes in his masterful use of “white and gray tones, two of the most complex color ranges to be used with mastery”, said the restorer, for whom this work has been “the finishing touch” to your career.

For Javier Portús, head of the Prado Department of Spanish Painting, addressing the restoration of this work was a “necessary task”, regaining the prominence of the “extraordinary color gamut of subtle whites and grays“, which Mora has restored after finishing Goya’s” El Invierno “, a painting with” very similar characteristics “in which these tones make up” chromatic symphonies “.

“The Countess of Chinchón is one of the works in history in which there is a greater emotional inclination on the part of the viewer; no one remains indifferent to this image” has highlighted Portús.

Details like “the feeling of dynamism of the hair“or the gaze of the Countess of Chinchón endow the painting with” sensitivity “, which, as Úbeda emphasizes, is the result of Goya’s” great empathy with the characters represented in his works “, and of which this work, restored with the collaboration of the Iberdrola Spain Foundation, Protector member of the Prado Museum Restoration Program, is an example.

After ten years of collaboration between the Prado Museum and this entity, Ramón Castresana, director of the Iberdrola Spain Foundation, has highlighted that the objective of this alliance, among others, is that “in two hundred years we can see paintings like this so well preserved as we see them now. ”