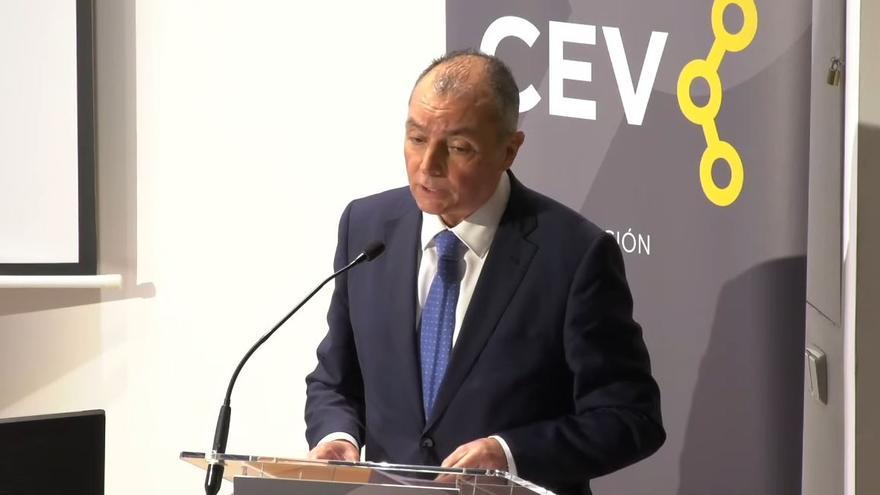 Advances in the development of the vaccine against covid-19 have opened a door to hope, which the regional employers believe could materialize from the second half of next year. But, until then, businessmen demand new measures to sustain the productive fabric and prevent its disappearance, while criticizing tax increases, such as the one approved by the Generalitat last week, or the one proposed by the central government for companies.

Specifically, the president of the CEV, Salvador Navarro, has demanded this Thursday from the Government the “non-refundable aid” for SMEs and the self-employed, and the extension of the ERTE “without excluding any sector”, “at least until the vaccine be effective. ” Otherwise, the spokesman for Valencian businessmen has warned that many of these ERTEs can become ERE.

This has been stated by Salvador Navarro during his speech at the General Assembly held by the CEV in Valencia and which, among other things, has served to certify the reconciliation of this organization with Uepal, the association heir to the disappeared Alicante employer Coepa. Also to announce the constitution of a new commission of self-employed within the employer’s association.

An intervention in which Navarro has not spared criticism of the Consell either, despite the fact that the president of the Generalitat, Ximo Puig, closed the assembly, and, in particular, has charged against the rise in Wealth Tax and personal income tax that it approved the regional executive last week, which he called “populist measures, approved in a certain ideological key”. Likewise, he has assured that “it makes no sense that while we are trying to maintain employment, the central government raises an increase in the tax burden on companies.”

Thus, instead, the president of the CEV, after recognizing that more resources will be needed to meet the expenses derived from the crisis, has advocated pursuing the underground economy to achieve them and for reforming the administration to lower their cost.

Regarding the measures to protect the business fabric, Navarro has valued the extension of the ICOs very positively, but has insisted on the need to approve new measures. Thus, he has indicated that, in line with what has been done in Italy, France or Germany, administrations must grant “non-refundable aid to SMEs and self-employed persons”.

In addition, he has advocated maintaining the ERTE “until the companies recover sufficient levels of activity to ensure their viability and maintain their workforce.” That is, “at a minimum, until the vaccine is effective.”

Regarding the proposals, Navarro has insisted once again on promoting public-private collaboration and increasing the weight of the industry in GDP, for which he recalled that the CEV itself has drawn up an action plan that aims, among other things, , “recover the industrial activity that has been ceded to other countries”.

He has also called for more support for the entrepreneur and more investment in innovation and digital transformation; and a plan to avoid bureaucracy and be more agile. In this regard, Navarro to streamline tenders and awards, especially before the implementation of the European plan for recovery. “We are concerned about not being sufficiently agile and effective when European funds are available,” he assured. “For this reason,” he pointed out, “we value the amendment of the Botànic groups that will allow us to process the contracts for the actions carried out under the recovery funds through the emergency procedure.”

He has also insisted on the need to “get it right” with active employment policies and has called for a greater boost to infrastructure, especially for the Mediterranean Corridor.

The president of the CEV has also not forgotten to include in his speech the demand for a new autonomous financing system that, as he recalled, “should have been one of the priorities of the current legislature. This was promised. But once again the horizontal leveling fund has neither arrived nor been accepted “.

For his part, Ximo Puig pointed out during his speech that the main priorities at the moment are “saving lives, saving jobs and saving companies” and that there is no dichotomy between these objectives.

Of course, he has made it clear that what must be saved are “viable companies”. “It is not a question of going around with the helicopter to throw money away. We must use the funds wisely,” said the head of the Consell. In this regard, he has been in favor of legislative modifications to facilitate the use of European funds, as had been proposed by the president of the CEV.

Puig has also insisted that these funds must be used to take “a double step forward” and not just stay out of this crisis, but promote the transformation of the Community’s economic model, which guarantees its future.

The President of the Generalitat thanked the businessmen for their efforts to keep their businesses afloat, as well as the CEV’s willingness to dialogue, which has made it possible to reach important social consensus-building agreements during the crisis, such as the Alcem-nos plan. . He has also thanked Salvador Navarro for his ability to “backbone” the autonomy business organizations, in reference to the disputes that existed during the disappearance of Coepa and the former regional employer’s association. Without doubt, also in a nod to the peace sealed with Uepal.