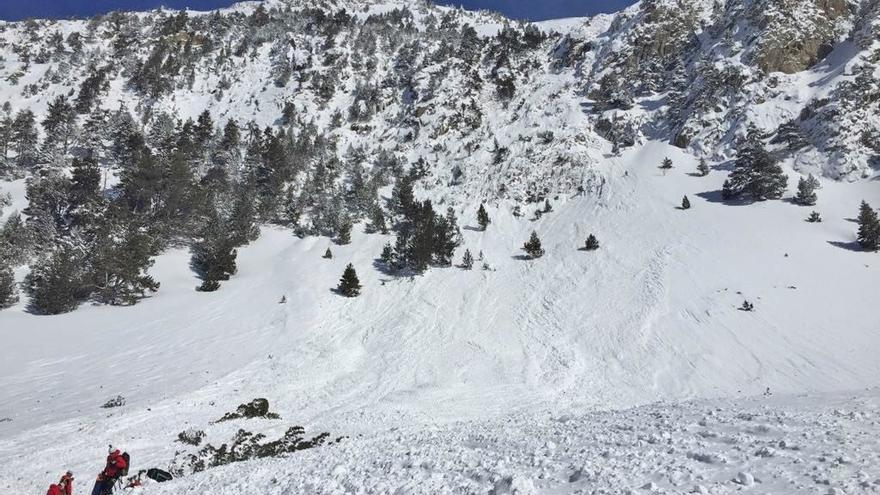 A judge from Vielha (Lleida) investigates the president of the Higher Council for Scientific Research (CSIC), Rosa Menendez, and two other positions of the state agency for the lack of preventive measures on an expedition to the Val d’Aran in March 2018 in which two workers died in an avalanche, one of them a 39-year-old biologist from Salamanca.

The president and those who were then responsible for occupational risks and human resources of the CSIC – an agency that depends on the Ministry of Science – have been summoned to testify on May 27 by order of the Hearing of Lleida before the “suspicions” that they may have committed a crime against the health and safety of workers, according to the car, to which Efe has had access.

The accident occurred on March 22, 2018, when three members of a scientific expedition to collect water samples from Lake Redon for a CSIC project were dragged by an avalanche in the Vall de Conangles that precipitated them down a vertical rock 90 meters high.

As a result of the accident, Roberto Sánchez, a researcher from Lasarte (Guipúzcoa) hired as a senior technician for the CSIC, was seriously injured, and the two people who accompanied him died: Gaspar Giner Abati from Salamanca, a biologist who had worked in this public company, and the mountaineer Unai Pérez de Arenaza, a resident of Bergara (Guipúzcoa).

Both deceased had been verbally recruited by the project manager, Luis C. -also investigated-, a few days before the departure of the expedition without carrying out any prior administrative procedure, nor manage any hiring request form and without the CSIC management authorizing any expenses related to their intervention in the sampling campaign.

This situation led to a demand by the Social Security Treasury and the social court number 1 of Lleida recognized in a sentence, which is being appealed before the Superior Court of Justice of Catalonia, that the deceased had an employment relationship with the CSIC despite the fact that this agency denied it.

The relatives of the deceased investigators have been constituted as a private accusation in the criminal case opened for the accident and have requested the imputation of the leadership of the CSIC because they consider that the expedition, whose members were equipped with material provided by the scientific company, was carried out without preventive measures.

In fact, after the fatal accident, the CSIC presented to the Labor Inspectorate an occupational risk plan that is approved in April 2018, that is, one month after the fateful expedition to Lake Redon, according to a report included in the summary.

The State Attorney, which represents the CSIC, and the Prosecutor’s Office opposed the investigation of those responsible for this company, but the Hearing of Lleida has ordered the judge take their statement as accused when understanding that they may be key to “know the organizational and preventive structure” when the accident occurred.

The court believes that, “despite the fact that the accident was described as fortuitous in an initial report prepared by the Mossos,” the existence of certain suspicions of the possible commission by those responsible for the CSIC of a crime against the health and safety of workers provided for in articles 316 and 317 of the Penal Code “.

The Hearing considers “of interest” the declaration of the CSIC positions as signatories of the occupational risk plan approved after the accident and, therefore, “possible persons responsible for the irregularities detected in this or other documents” and for the “omissions in the preventive measures that should have been taken and that possibly caused the tragic accident.”

The families of the two deceased already achieved a first victory when last December the social court number 1 of Lleida concluded that the provision of services they did to the CSIC was “of a labor nature”.

According to the judge, both workers “lacked their own productive infrastructure”, they were going to receive an economic compensation pre-established by the CSIC for their activity -not for the result of it-, and the company “made available all the equipment, utensils and material “necessary for its purpose.

This ruling maintains that the CSIC hired Roberto Sánchez as a senior technician with a temporary work contract to participate in the expeditions that had to collect samples from Lake Redon, in which he was normally accompanied by two people from outside the CSIC and the project director.

The two external members of the expedition -usually mountaineers or mountain guides- they used to be recruited “on an impromptu basis” shortly before departure, according to the sentence, which details that about 100 euros a day were paid for the accompaniment activity on the ascent and descent to the lake.

When he could not count on the usual external services, adds the judge, the project manager verbally hired “other acquaintances whose experience as mountain guides was assumed and with technical aptitudes to ski carrying weight “, to which he paid between 80 and 100 euros a day, in cash and without invoice.

In the tragic expedition of March 22, 2018, the project leader could not participate because he had a dislocation in his arm and neither did the mountaineer who usually accompanied him, so he booked the two companions who ended up dying.

However, when he testified before the Mossos d’Esquadra, the person in charge of the study affirmed that only Sánchez had been hired by the CSIC for his “extensive experience” and that he was accompanied by the two deceased mountaineers, for the “friendship relationship between them. united “.

According to the judge, from the CSIC “no administrative procedure was carried out” to hire the deceased, neither was the management informed of it, nor were they asked for a degree or insurance policy or proof of being registered as self-employed.