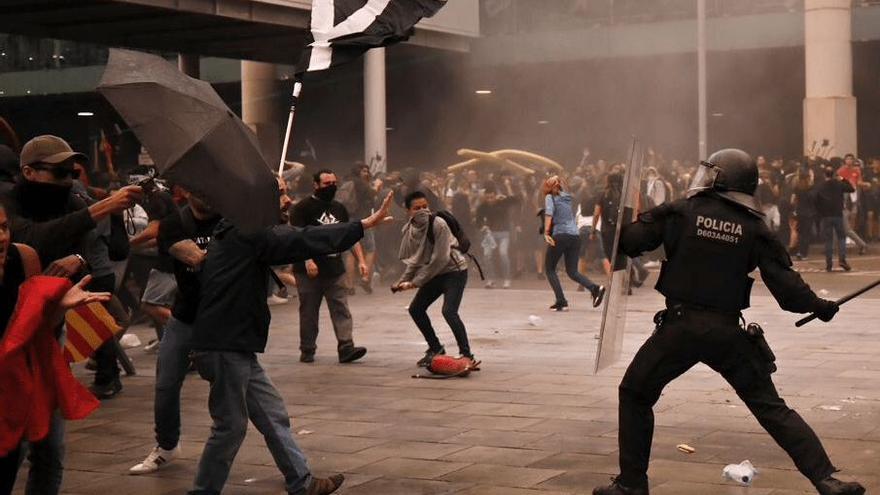 The hate crimes prosecutor asks for five years in prison for four far-rightists who, after the conviction of the leadership of the process they gathered in the Plaza Artós in Barcelona to chant Nazi proclamations and they started looking attack pro-independence, attacking “mercilessly” one of them.

In his brief, the prosecutor attributes the four defendants, MRC; XVA; XCC and JD.MV a crime of injury with the aggravation of abuse of superiority and to act on the grounds of ideological discrimination, which is why it also requests that they be prohibited from demonstrating in the Catalan capital in the five years after the prison sentence imposed on them.

In addition, it also requests that the four accused, two of whom remain in preventive detention, compensate the victim with 2,800 euros for the injuries suffered -political trauma-, with another 8,000 euros for post-traumatic stress and another 6,000 euros for moral damages.

The events occurred on October 17, 2019, three days after the conviction of the procés leadership, when thousands of independentistas took to the streets daily to protest the Supreme Court ruling, in demonstrations that led to serious disturbances in the Catalan capital.

In this context, according to the head of hate crimes at the Barcelona Prosecutor’s Office, Miguel Ángel Aguilar, about 250 people gathered in the Plaza Artós in Barcelona on October 17, as a result of a convocation of extreme right-wing ideology groups, in an act in which some of the attendees raised their arms simulating the Nazi salute, sang the Falange anthem – the Face to the Sun – and brandished Francoist flags.

Near the Plaza Artós they met spontaneously some 400 people from self-styled “anti-fascist” groups, to which the Mossos d’Esquadra deployed a strong device to prevent both antagonistic groups from coming into contact, although the respective assistants booed each other, uttering insults and threats.

In fact, according to the prosecutor, from the far-right group flares were lit and an attempt was made to break the police cordon, at the time when the accused MRC hit an agent of the Mossos d’Esquadra with the pole of a flag, facts that have been followed in another judicial proceeding.

Around 8:40 p.m. the far-right group left the Plaza Artós and paraded towards the center of Barcelona, upon learning that other calls were being made with a large influx of independentists, with the aim of attacking them, so that during the journey they took blunt utensils, such as metal and wooden posts, which caused several people to run away when they saw them , for fear of being attacked.

In his letter, the prosecutor highlights that several ultra-rightist groups, some with their faces covered and with blunt objects, such as sticks and iron bars, left the Artós demonstration “with a clear intention of looking for pro-independence people to attack them.”

The attitude of the far-right protesters was “rising in tone”, with a “belligerent” attitude and starring in clashes with the Mossos d’Esquadra, which were “overwhelmed”, according to the public ministry, which details that the police were able to disperse the ultras, although this caused some small groups to go through the Catalan capital “without any type of police control”.

In this situation, a group of about ten people from Artós, including the four accused and one minor, armed with sticks, metal tubes, stones and flags with wooden handlesAt the confluence of Balmes and Rosselló streets, and with his face covered, they reached a 23-year-old young man at the confluence of Balmes and Rosselló streets, whom they identified as an “enemy” by linking him to the independence movement, so they launched into him.

According to the prosecutor, the defendants, moved by their “deep animosity to the ideology” that they attributed to the young man, and with a manifest desire to injure him, took advantage of their numerical superiority and quickly brought down the “real mass of harassment”. young.

Specifically, JD.MV attacked him with a metal tube, before which the young man fell to the ground, where the other defendants “continued to attack him mercilessly” with blunt objects and repeatedly kicked and punched him all over the body and only abandoned their attack. when other people came to the victim’s aid.

In his letter, the prosecutor details that MRC and XVA have been involved in several confrontations against pro-independence activists and that XCC shows its adherence on social networks to radical sports groups such as the “ultra-south” and other organizations that legitimize violence for political reasons.