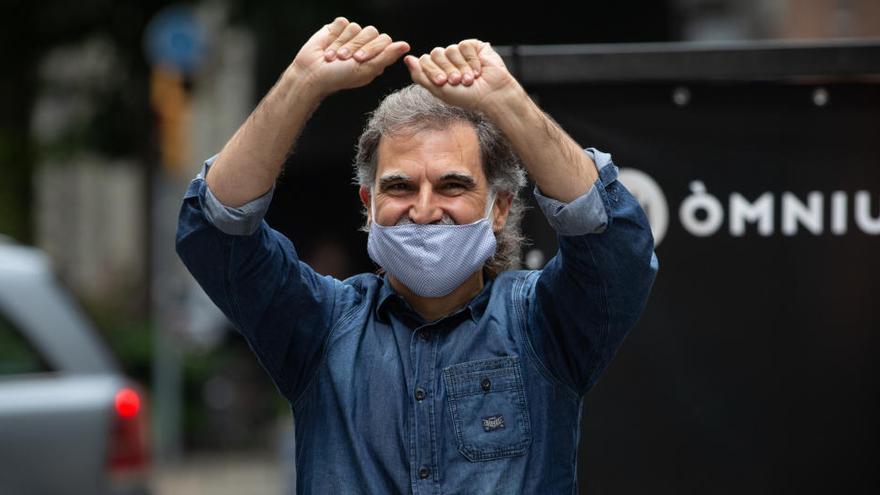 The Prosecutor’s Office defended this Thursday to condemn Òmnium Cultural for allegedly violate the right to self-image of a Civil Guard sergeant, of which the entity used his voice when testifying at the 1-O trial for a propaganda video, for which the Public Ministry has claimed compensation for moral damages of between 6,000 and 10,000 euros.

In the trial this Thursday in the Court of First Instance 57 of Barcelona, ​​the plaintiff civil guard has maintained his request for receive compensation of 10,000 euros for moral damages considering that his voice was used in advertising, and he has affirmed that the same day that he testified in the Supreme Court (TS) for his performance in the register of the Ministry of Foreign Affairs before 1-O rHe received “a lot of whatsapps and links related to that video.”

Has stated that that same night “there were more than 5,000 tweets” in reference to his testimony, and that several media outlets used his voice to report the trial, while he was also used on social networks in a humorous way for his statement about a Òmnium flag.

The video that originated this trial collects a part of the defense interrogation of the sergeant in the trial on 1-O, in which he describes a Òmnium flag that he saw during the Foreign search, although this description does not match the entity’s flag.

“They ridiculed me, they laughed… and I have not sued any of these people for all these videos. I understand that, although I am not a public person, I have been testifying in a public and interest trial. I do understand what freedom of expression is, “which is why he has argued that his complaint is only due to the fact that he considers that Òmnium used his statement for advertising purposes, since the message ‘Become a member’ appeared at the end of the video.

The agent has considered that Òmnium’s campaign video “marketed” with his voice, and has claimed that people whom he has not seen for years recognized him even though his image did not appear.

Regarding the justification for his request for compensation for non-pecuniary damage, he explained that his teenage daughter has been affected by the fact that other people have recognized him in the video, and added that the situation may harm him in his work as an undercover agent : “I have done several undercover services, where drug traffickers did not know my identity. I don’t know if today I can trust myself, because if a person who hasn’t seen me for 20 years has recognized my voice, can a drug trafficker I met 15 days ago recognize me? ”

To questions from Òmnium’s lawyer, the sergeant has clarified that no resolution of the body has “proven that his work as an undercover agent has been put at risk”, and has also answered that he did not file any complaint for the effects of the facts on his daughter .

“The sergeant was lying”

The president of Òmnium Cultural, Jordi Cuixart, who has intervened as a representative of the entity and by videoconference from the Lledoners prison (Barcelona), explained that the video “was part of a campaign to denounce the violation of fundamental rights” during the trial on 1-O.

Cuixart has assured that the video was one of the simplest of the campaign because it only consisted of reproducing the statement of sergeant: “What we wanted was to report that the witness was not telling the truth, he was lying saying that there was a flag when he was unable to argue it.”

“It is more than evident that either there is bad faith, or there is false testimony, or there is a manifest incompetence of a public servant unable to define that flag that he claimed he had seen, the president of the Chamber himself says so in the sentence, “he said about the statement of the sergeant in the Supreme Court, when the civil guard lawyer asked him if Òmnium reported false testimony, to which Cuixart has explained that they did not consider it necessary because the magistrates have already rejected his statement.

In this Thursday’s trial, three employees of the Òmnium Cultural communication area have appeared as witnesses, including the campaign director, who explained that the video in question was part of the ‘Trial of Democracy’ campaign, in which they also used videos of Civil Guard Colonel Daniel Baena, chief of the judicial police in charge of the 1-O investigation; of the former president of the Government Mariano Rajoy and the former delegate of the Government in Catalonia Enric Millo, among others, and has assured that none of them has sued Òmnium for those videos.

Regarding the final message of the video, ‘Become a member’, he said that was intended “more to mobilize society”, and has said that in the different videos they used other messages such as ‘Get involved’ or ‘Become a volunteer’ interspersed.

For his part, the entity’s communication director explained that to capture images of the room during the trial to 1-O they used the institutional signal of the Supreme, which all the media and also Òmnium received through TVE, and has defended that they did not change “not a single word of what the witness said.”