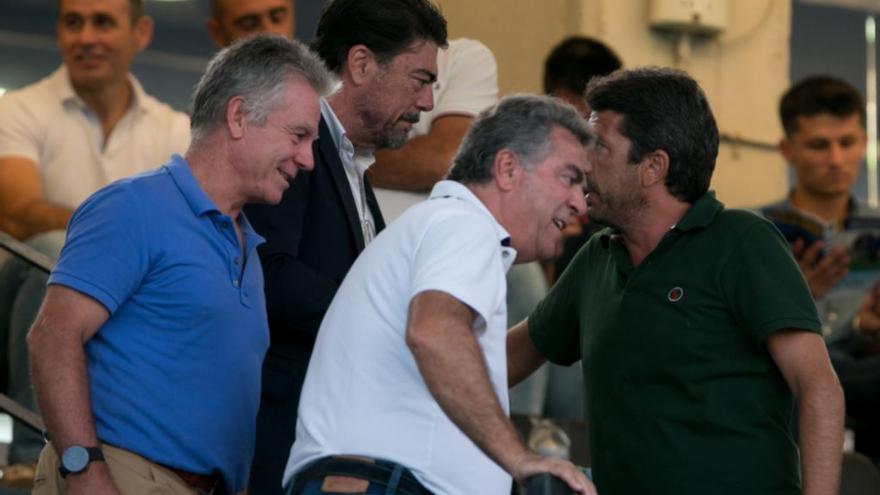 It is impossible to gauge the outcome of a revolt against the system which began the day that a mayor of Alicante, the first in the last 21 years, dared to question the credit of the owner out loud, openly, with microphones in front of him. That exhaustive “the owners have lost all credibility” lit the fuse of an artifact that, if exploded, threatens to generate an expansive wave that can wash away anything it catches.

The City Council has facilitated its processing by urgent means

What is going to happen tomorrow before noon is possible through the mediation of the first mayor, who promised to mediate by the groups of fans, four exactly –Unidad Herculana, Asociación de Herculanos, Negre Lloma and El Chepa– so that the formal request of the pertinent permits could be accepted by the Government Sub-delegation despite not respecting, by far, the terms of the ordinary channel. And that involvement of the first mayor is the one that has the inner circle of Enrique Ortiz the most disoriented, a businessman who is condemned to understand with the domestic administrations, with all of them, without exception.

Nobody in the PP had taken that step. No popular member had thought so frankly about the builder. Yet what was originally intended to be an assessment to lift the spirits of a city frustrated by the monotonous march of its team has turned into a tornado.

The fans, at least that part that they received in the council room, with which they shared in person (not even the plenary sessions are held face to face) for more than two hours, they thought they understood something from their mayor that actually Did not say. We know this because Quique Tébar – who intervened in the unanimous approval of the Institutional Declaration to accelerate a substantial change in the way of managing the Hercules property – reminded him before saying goodbye: “We are waiting for you all there.” They will not go, at least on behalf of their municipal groups. The acronyms of the parties will stay at home.

The councilors agreed not to represent their parties

The symbolic act of debating an issue such as the one voted on in the proposal in plenary is very relevant in itself. So much so that it was the first time. But there it will stay. The mayor lowered the tone of his criticism in his speech, he was able to underline, emphasize, abound, value, but he did not, he adhered to the script agreed by the six spokesmen. There were no fanfare, they all stayed on the stairs of the Central Market on Tuesday.

If the demonstration against the management of Ortiz and his partner on duty goes wrong – disappeared at all levels since the possibility of generating income jumped into the air at the epicenter of the pandemic -, that is, if they do not support it en masse For those who yearn for a transfer of powers, the fireball that reaches the Town Hall Square around twelve noon will remain in a simple flare that, incidentally, will facilitate a graceful exit to the first mayor, a friendly one who does not it would force anyone to be put between a rock and a hard place.

But if this is not the case, if it turns out that Herculanism takes to the streets and asks what the City Council has allowed it to ask, what has invited it to believe – whether or not it is aware of what it was doing – then it will be necessary to put all the cards on the table and take a picture, that is so unusual in the times of imposture that dot the world. The “now or never” that the advertising poster exhibits makes it very clear, the promoters are not going to settle for evasion.

Keep an investment of 80 million or risk the future

When the march concludes, the most popular businessman from Alicante in the capital will have much clearer than today what to expect. He will know, in the chess game that Barcala activated on Tuesday, how to execute his next move, one that he has already thought about, because he has always known how to be two steps ahead of his competitors, thus he has become rich and therefore the two million that he has been injecting into the team in Second B for 7 years, they haven’t taken him away from eating.

Ortiz does not want to leave an entity that has advanced under his control and that of his family for more than two decades. He may do it by circling, limping, exposing himself and his loved ones many times, but he considers it his property and a businessman like him does not raise a building so that the money from the sale can be pocketed by a ‘competitor ‘.

The builder is willing to explore the municipal road, a Hercules supervised by the City Council, with him at his side, injecting a part of the liquidity, with more entrepreneurs willing to join forces, not to stay with the productive unit, who knows what evil intentions, which is what he fears and is reminded of him daily in his closest environment.

Ortiz is not going to clash with the Town Hall or anything like it, but he is not going to leave Hercules if the mayor does not ask him publicly. Barcala will not be at the demonstration, not in person, but his name will be present in the heads of all the participants, he has the last word … and he will have to pronounce it. We are slaves to the verb.