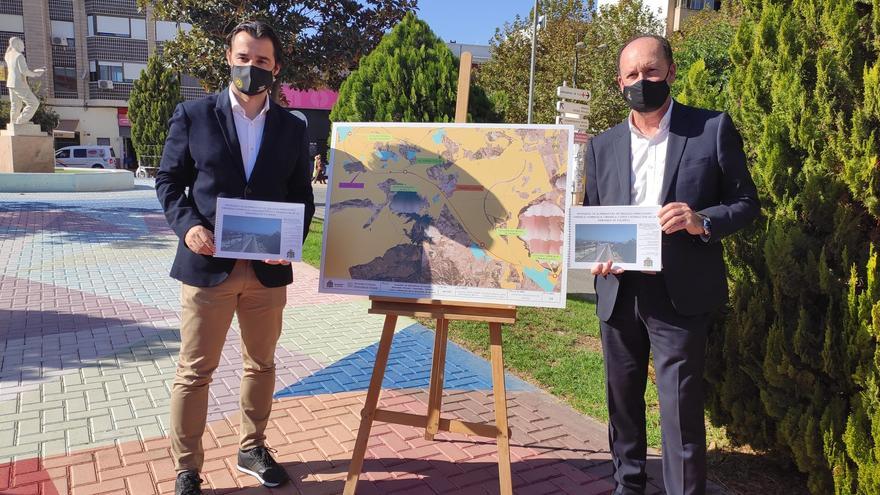 The mayors of Torrevieja and Orihuela, together with the president of the Provincial Council, have presented this morning at the Orihuela intermodal station a project of “Orihuela-Torrevieja / Orihuela Costa Railway Tracing”, commissioned by the Department of Civil Engineering at the University of Alicante, which it costs 270 million euros. After presenting it, they have asked that the Generalitat assume it and pay it.

The mayors of Orihuela and Torrevieja, Emilio Bascuñana and Eduardo Dolón, “showing the perfect harmony of the two largest nuclei in the Vega Baja”, according to the press release of the Orihuela City Council, they presented this morning the project of the “Orihuela-Torrevieja / Orihuela Costa Railway Tracing”, prepared by the Department of Civil Engineering of the University of Alicante, under the direction of the professor Armando Ortuño. The presentation ceremony was attended by the president of the Alicante Provincial Council, Carlos Mazon, while the vice president of the provincial institution Julia Parra and different councilors of the Oriolano City Council Government Team have also attended.

As Bascuñana has reported, this joint project between both municipalities consists of “Respond to the great needs of the Vega Baja, with the union of the coast with the interior, in a parallel way to the CV-95, through this railway route, which we are going to raise for evaluation before the Generalitat Valenciana and the Ministry ”.

A proposal for a railway connection route with Torrevieja-Orihuela Costa from the Intermodal and High Speed ​​station of Orihuela Miguel Hernández that “will add” to the current commuter service, to the offer of bus and coach services, in addition to those offered in terms of high speed, since as the first mayor recalled “The stop of the AVE in Orihuela is key in this route because it represents great opportunities for alternatives within the Region”, while it has also advanced that “We proposed the financing model of the availability payment to carry out this project and we hope the support of the rest of the towns of the region so that the route can be translated into reality as soon as possible”, has concluded Emilio Bascuñana.

For his part, the mayor of Torrevieja, Eduardo Dolón, has stated that “it is the best news that the Vega Baja region can have, because it is a totally viable project and it is the reality that we deserve in the south of the Valencian Community”.

Likewise, the first mayor of Torrevieja has insisted that “It is a good time for the VegaRenhace Plan to include an item for these rail route alternatives, and we hope to be received by the president of the Generalitat Valenciana and the minister to include an amount for the preliminary project in the budgets”. In addition, it has advanced that the project commissioned by the Orihuela City Council “It will be complemented later with the study on how it would enter the municipality of Torrevieja and how it would connect with the CV-95”.

On the other hand, the draft engineer and professor at the University of Alicante, Armando Ortuño, has explained different aspects of the railway route and has indicated that “The fact that Orihuela will have a high-speed stop means that, starting the branch from this station, we give continuity to different services such as long distance as well as other short-haul services such as commuter services.”

In this sense, two possible locations have been established for the project site from the Oriolana station. One next to the AP-7 and CV-95 before the entrance to the Los Balcones urbanization, and another in the vicinity of the Los Balcones-Torrevieja University Hospital urbanization.

It has also been made an environmental analysis which includes the main determining factors when defining the layout, such as the land of protected natural areas, urban planning in terms of classification and qualification of the land, flood hazard, PATFOR, morphology and characterization of the land as well as existing infrastructures.

There are two route alternatives such as the route between the nuclei of the districts of Arneva and Hurchillo (the route through the Hurchillo mountain in the form of a tunnel) and from the Orihuela station it intersects with the CV-925 running between Hurchillo and El nucleus of Bigastro (from the Pedrera area a single route would be made).

For his part, the president of the Provincial Council, Carlos Mazón, has stated that this infrastructure “It will bring economic impact because we are talking about an investment that can generate employment, more tourism, commercial traffic, economic activity, terms of competitiveness in the territory, in short it can generate a positive impact on the well-being of citizens ”. Mazón stressed that the union of these two municipalities “represents the locomotive leadership that we salute in provincial terms and that will bring us great days for the future for Vega Baja.”

“Regarding the cost of executing the project, the cost of the total execution is estimated at 277.6 million euros, the amount of which is divided into infrastructure, superstructure, expropriations and Bigastro-Jacarilla, San Miguel and Torrevieja stations. Orihuela Costa “, says the press release in its last paragraph.