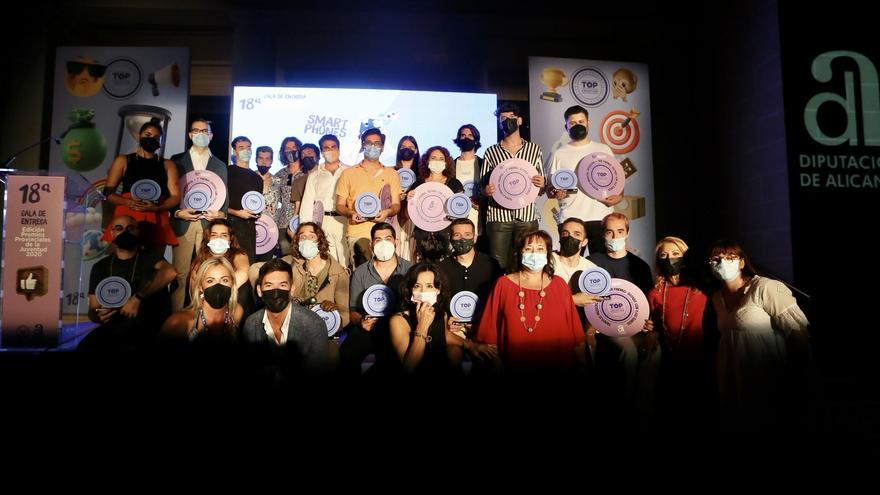 The gardens of the Provincial Archaeological Museum -MARQ- were filled with ingenuity and creativity last night in a new edition of the #TopCreation Awards Gala. During the evening the young talent from Alicante who have launched business initiatives, who have high-quality blogs, who make music, are photographers or photography lovers, or those who venture into letters through stories. In total, the Provincial Council, which annually announces these distinctions, distributed a total of 18,000 euros.

Alexis Sanz -El Campello-, promoter of the LAlicantina.com project, focused on relaunching local commerce, and Xavier Llinares -Cocentaina-, creator of Ohhana, an initiative that designs and markets knitwear under the criteria of sustainability and social responsibility, they won the Entrepreneurial Initiative Award, endowed with 2,000 euros, the first, and 1,300 euros, the second.

In the Blogs category, the first prize of 1,000 euros went to Carlos Congost, from Alicante, for his web space ‘Zero Music’; the second, 700, for Francisco Nicolás Mercader, from Benidorm, for ‘Beyond the city’ and the third, 300, for Antonio Ortuño, from Torrevieja, for ‘Douglas the ruthless’.

In the Musical Work section, the first prize in the Soloist category, endowed with 1,000 euros, went directly to Alvaro Hidalgo from Alicante for ‘Calling You’, while the second place went to Víctor Vera, who received 700 euros for his song ‘Santa Cruz’, and the third, 300, for Luis García from Alicante for ‘Against the Wall’.

For their part, in the Group section, the members of Padre Bombero, from Alicante, obtained the first prize -1,700 euros- with ‘Esta Canción’; those of No More Knobs, by Elda, and his work ‘Chase the Sun’, the second -1,200 euros-, and those of The Ubangui Stomp, by Ibi, the third -900 euros-, for their song ‘Sunset Girl’.

In addition, in the Photography category, Cynthia Ferez from San Vicente won the 1,000 euros of the first prize for her image ‘Ingrávido’, the Alicante-born Javier Galiana, the 700 euros of the second for ‘Powerxtreme’ and the Torrevieja Irene Mercader, the 300 euros of the third place for ‘Vorágine’.

Finally, in Short Story the three winners were María Gutiérrez, from Alcoi, with ‘Empanadillas’; Roger Garrido, from Cocentaina, with ‘The victory will be tougher’ and Raúl Egido, from Ibi, with ‘Zozobra’. The prizes amounted to 1,000, 700 and 300 euros, respectively.

The deputy of Social Services, Equality and Youth, Mª Carmen Jover, presided over the ceremony of delivery of these awards, endowed with 18,000 euros. “This edition is especially significant because, in addition to serving as a platform for young people to spread and make their talent known, we want it to serve as a stimulus and motivation in these difficult times. Now, more than ever, we need to recover the illusion that the pandemic has taken from us and we believe that proposals like this are an excellent incentive to do so, ”said the provincial official.

The well-known comedian Sara Escudero She was in charge of presenting this act in which there was no lack of laughter and the ‘good vibes’. More than 150 people gathered at this long-awaited gala, which in 2020 could not be held due to the pandemic and which ended with the singer’s performance Mention Jones.