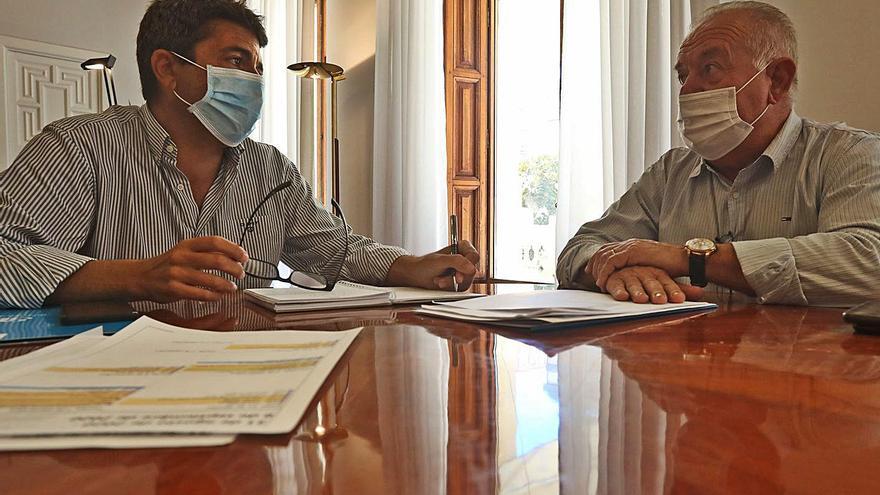 The Alicante Provincial Council has transferred to all city councils in the province the 14.7 million euros with which the provincial institution participates in the Resist Plan. It has done two months after the signing of this rescue plan and for the Generalitat to make the funds available to municipal governments through the bank confirming formula, a zero-interest financial mechanism.

The political unit that Ximo Puig Y Carlos Mazon They have claimed on many occasions it has cracked both in the bottom and in the forms. Plan Resistir, endowed with almost 400 million destined to sustain the productive fabric and maintain employment, has only increased the tension between them as a result of the delay in the granting of aid by the Provincial Council. The distrust between Ximo Puig and Carlos Mazón is absolute and, in addition, the two strive to expose it publicly. It is not uncommon for discrepancies to arise or for the two political leaders to accuse each other of serious errors in management. Carlos Mazón has his sights set on the PP regional congress and will not miss any opportunity to consolidate his leadership and his opposition to the policies of the Consell. For his part, Ximo Puig is focused on putting together a convincing Alicante story, knowing that Mazón is the man chosen by Pablo Casado and Teodoro García de Egea to replace Isabel Bonig.

In this context, the Resistir Plan has become the main reason for disagreement in recent weeks. This crash plan It was signed between the Consell, the councils and the municipalities to help economically the sectors most affected by the sanitary restrictions and that have been forced to close their businesses, reduce their opening hours or limit their activity, with the economic losses that it has caused. Within this program, the Parenthesis Grants were launched, designed to inject liquidity into the sectors affected by the economic crisis, and which had the consensus of the Valencian Government and the representatives of the rest of the administrations. The Alicante Provincial Council promised to allocate 14.7 million – 22.5% of the total that amounted to 65 million – and at the beginning of February, Carlos Mazón signed the decree of adhesion. Since then, both the Generalitat and the councils of Valencia and Castellón have made effective their respective subsidies to the consistories, while the delay of the Alicante institution has aroused all kinds of criticism among opposition groups, who have rejected that the team The government will trust these aid to the remaining treasury instead of including them in the budget. For its part, the PP has attributed this delay to the obstacles it has had during the administrative processing of this program and has insisted that the Generalitat make its payments through confirming and not by nominative transfer as the provincial institution does. The popular maintain that the contribution of the Generalitat, which has opted for confirming, will not become effective until mid-May, despite the fact that both the Consell and the socialist mayors have ensured that the autonomous funds are already in the municipal coffers and, in fact, there are towns that have already given all the aid. “We are pleased that the Provincial Council is finally fulfilling its commitment after two months. We have finally completed a process that should have been faster ”, said yesterday the general director of the Local Administration, Toni Such.

For his part, the deputy for Economic Development, Sebastián Cañadas, affirmed that all the Alicante consistories have already received in their respective municipal coffers, directly, the contribution of the provincial institution and accused the president of the Generalitat, Ximo Puig, of “Lying to hide that it is precisely the Generalitat that is forcing city councils to advance the money by having chosen to confirm, dated May, to make their contribution effective.” Cañadas insisted that the formula chosen by the autonomous administration “has put the municipalities in serious trouble.”

Soler celebrates the acceptance of this line of financing, for which 4,000 applications have been received

The Valencian Government has already approved 1,046 subsidized loans amounting to 69.1 million euros from the Horeca line, for self-employed, SMEs and micro-SMEs in the hotel, restaurant, tourism and leisure sectors within the Resistir Plan, with an average of 66,051 euros. The Minister of Finance, Vicent Soler, gave these data yesterday during his appearance in the Economic Commission of the Courts, where he highlighted the capacity of the Consell to react since the declaration of the state of alarm. Soler was satisfied with the reception that this financing line is having, for which about 4,000 applications have already been received for a total amount of 220 million euros. The loan line will be expanded as necessary to cover companies, and, in fact, in two months the initial endowment has been exceeded by almost 20 million, according to Vicent Soler during his appearance to give an account of the state of the aid of the Resistir Plan, which also include Paréntesis aid and direct aid for tourist accommodation and nightlife.

The president of the Diputación continues trying to isolate Ximo Puig through alliances with most of the councils. Yesterday it was the turn of Education, an area with which the Provincial Council has signed a collaboration protocol to improve the management of waste generated in educational centers. In particular, the collaboration will take the form of actions such as informing the representatives of the centers of good practices in waste management.