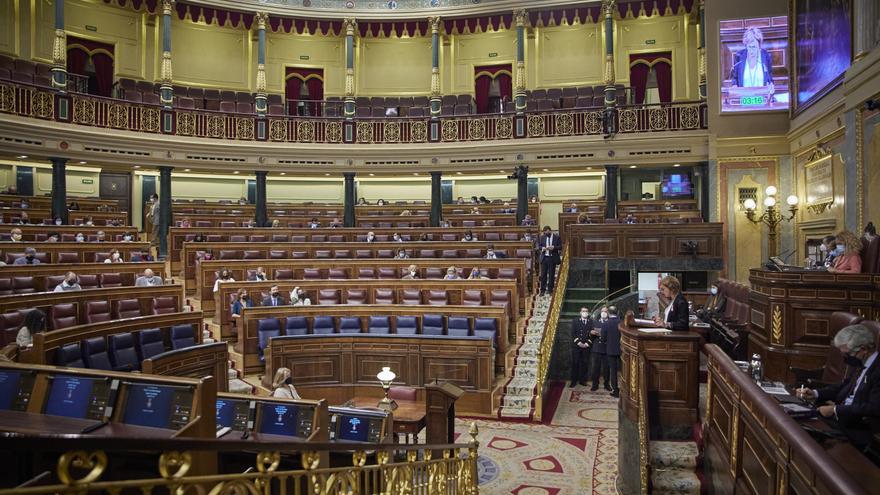 Pedro Sánchez said last Sunday that his Government will repeal the ‘gag law‘, but it won’t be soon. The PSOE has promoted this Tuesday a further extension of the term for amendments to the proposal that the PNV registered in Congress a year ago. Ya van 40. The Basque nationalists are angry and do not hide their discomfort in private; not in public either. The group’s spokesperson, Aitor Esteban, was blunt in a message on his Twitter profile, which closed like this: “They have been like this for more than a year. Much advertisement, no action”.

Today, for the umpteenth time, the Board of Congress with the votes of the PSOE has extended the deadline for amendments to our proposed law to reform the “gag law.” And so they have been for more than a year. Much advertisement, no action. https://t.co/w97P6aWk70

Sources of the governing body of the Chamber have explained to The Newspaper of Spain that successive extensions of the term for amendments They come from the agreement that the two parties that make up the Government have in this regard, and that they are the majority in the Table to monopolize six of its nine seats. Extending ‘sine die’ this process is one of the most recurrent and recurrent ways to numb a law, and perhaps, annihilate it. There have been numerous cases of registered projects and proposals that evaporate at the end of the legislature because no one brings them out of their slumber.

That of the ‘gag law’ is a striking example; just review the dates. The initiative presented by the PNV was taken into consideration on September 29, 2020, bypassing an amendment to the entirety (the first of the terms) a month later and, consequently, entered the period of partial amendments. It is a process that jumps from week to week if the majority of the Board decides.

This is exactly what happened: 40 extensions accumulate the law; 40 weeks; one year.

The agreement existed in 2019

PNV sources directly accuse the PSOE of the delay. They are outraged in this party when they are told that two days ago the president said that the law for the protection of citizen security, as it is called, will be repealed. To tell the truth, he has been saying that since 2015, but the repeal does not come. In the meantime, the norm approved by the Government of Mariano Rajoy with its absolute majority continues on its way. It continues to apply. During the hardest part of the pandemic, when mobility was reduced by the state of alarm, it became the legislative cushion for numerous police actions.

The PNV is also bothered by the attitude of the Table, or more specifically its way of operating. The meetings of this body are secret, they lack minutes. It is not known what reason the promoters of the extensions argue.

It may be that the Government is finalizing a project to repeal the organic law, or that it is the socialist group that is putting the final touches on a proposal that will replace that of the Basque nationalists. However, the text that in September 2020 the deputy defended before the plenary session Mikel Legarda It is the fine-tuning of the document that a year and a half earlier agreed the majority in a presentation created for this purpose within the Home Affairs Committee. In February 2019, PSOE, PP, Unidos Podemos (as it was called then) and the PNV had managed to agree on the law that would repeal the ‘gag’ law.

The aforementioned Legarda recalled it this way in the debate on the admission for processing: “The Basque Parliamentary Group presents again, as in previous legislatures, a proposal to reform the Citizen Security Law that in the XII Legislature could not be culminated due to premature dissolution of the Chamber; However, substantial progress had been made in the corresponding presentation of the Interior Commission, with agreements up to article 36 and basically between the Popular Party, the Socialist Party, the Basque Nationalist Party and other political formations; agreements reached – I have to remember – in a climate of calm. ”

Indeed, the document was agreed almost entirely. Parliamentary sources that participated in that process recall the ease with which the pacts were succeeded, article by article until 36. In a norm that is made up of 45 precepts, the percentage, obviously, is high. “One more presentation meeting, three more hours, and we would have agreed on the whole text, everything”, recalls one of those sources.

The beginnings, three and a half years ago, were complex because in the Interior Commission, chaired by the PP, they applied two presentations: one, at the request of the PSOE, proposed the repeal and return to the so-called “Corcuera law”; another, from the PNV, was pursuing the repeal based on its own text. “An important chaos was mounted because the groups saw ourselves in the position to amend both texts; a madness”. In the end, seeing that it aroused a more favorable climate, that of the Basque Nationalist Party caught on.

The motion of censure that promoted Pedro Sánchez to the Presidency of the Government (June 2018) slowed down the work; in November they resumed at cruising speed. In fact, in February 2019 the deal was almost done. The interest of the PSOE, United We Can and the PNV to proceed with a more technical than ideological work was crucial, which “puzzled the PP and Ciudadanos.”

Everything was almost done. But the budgets were rejected in Congress and Pedro Sánchez called elections

Most agreed on the softening the terms of the rule, at points as controversial as the time of detention in the police station (which was reduced to two, extendable to six), the searches (prohibited except in highly regulated conditions), the express calls for demonstrations in the face of current events and social outcry (four hours in advance), the elimination of obstacles for concentrations in the vicinity of the Congress and the Senate, the dissemination of images of agents (without sanction) or the attribution of responsibilities to the people who cause damage in a demonstration (not to the conveners) .

Everything was almost done. But the budgets were rejected in Congress and Pedro Sánchez called elections. The ‘gag law’ follows.

The problem of hot returns

A source familiar with the process in Congress identifies two of the causes that could be behind the “null” interest of the PSOE in unblocking the rule: hot returns of migrants and police pressure.

The first point sparked heated discussions during the presentation at the end of 2018. Sánchez was already in Moncloa and his party asked to wait for what the Constitutional Court would say. At the end of last year he endorsed them.

It is a final provision that the PP introduced despite the fact that its content and scope are more closely related to immigration legislation and regulations. In the presentation “it could have been solved in very generic terms,” ​​says one of the sources consulted.

This aspect, and all those mentioned, appear in the PNV bill, which it presented to the plenary for consideration more than a year ago. Take into consideration what went ahead. It seemed the beginning of the end of a long traffic jam, but reality has provided otherwise. 40 weeks later, the law is still in the drawer, gathering dust.